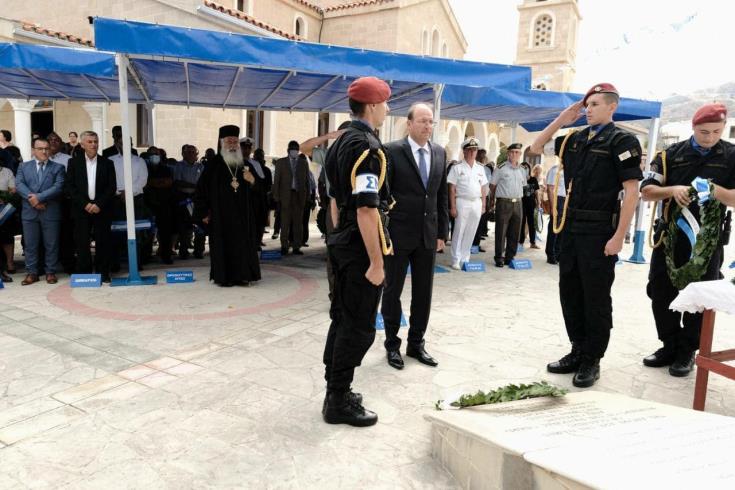 The Minister of Defence said that the drama experienced by the Cypriot Hellenism, in combination with the unacceptable aggressive attitude and behavior of Turkey in the Exclusive Economic Zone of the Republic of Cyprus remind us that our country and the whole Hellenism is going through important historical and political critical moments. This was said during the Minister’s speech at the memorial service for the deceased in the battles of Tillyria of 1964, which was performed on Sunday, August 9, at the church of Agios Raphael in Pachyammos, in the presence of the political, religious and military authorities headed by Metropolitan George of Paphos.

From the community of Pachyammos, he continued, honoring the young men of the National Guard, the volunteers, but also all the heroes who gave their lives for the freedom of this long-suffering place, we have the duty to declare that we will give our best for the redemption and reunification of Cyprus.

As Cypriot Hellenism, we owe it to ourselves to continue to be worthy of these circumstances, challenges and these critical moments.

He noted that today, 56 years after the sacrifice of the heroes of Tillyria, we pay the minimum tribute to our fallen, during the first organized attempt of Turkey to interfere in the territorial integrity of Cyprus. We reverently bow, promising to look worthy of the greatness of their soul and courage.

In this direction, said Mr. Petridis, Cyprus, as an EU member state, remains fully committed to the principles and values ​​that govern the European acquis, but also to the basis of United Nations decisions and resolutions. We seek, he said, a functional solution that ensures peace, human rights, democracy and the European identity of our state.

At the same time, he continued, we declare in every direction from this step that no Turkish intransigence, no threat and no obstacle will force us to deviate from the path towards the liberation and reunification of our homeland.

After the memorial service, runners of the Pancyprian Association of Reserve Paratroopers carried the flame from the Lorovounos hill, where the epic victorious battles of the 31st Special Forces Unit were fought, to the courtyard of the temple.

After the lighting of the flame, a memorial prayer was held at the site of the monument followed by a tribute to the fallen and the deposition of wreaths.

Isaac – Solomou Memorial Initiative “From Grigoris, to Tassos and Solomos”