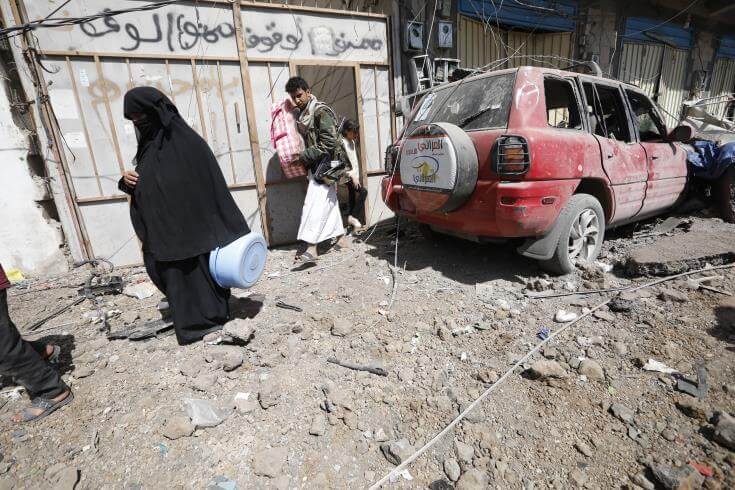 The military alliance under the leadership of Saudi Arabia that intervened in the war in Yemen in 2015 announced today Tuesday that it once again launched airstrikes against “legitimate” Shiite Houthis rebels in the densely populated capital Sanaa, warning civilians not to rally around potential targets, according to Saudi state television.

The same source said that the “secret” facility of the Revolutionary Guards, a corps of the Iranian army, in the Yemeni capital was targeted. Al-Massira television network, affiliated with the Houthi movement and Iran-aligned, reported that three raids were launched against airport Sanaa and a fourth in a park.

The Houthis have repeatedly launched attacks against Saudi Arabia, particularly against oil facilities, using ballistic missiles and unmanned aerial vehicles (UAVs) loaded with explosives, following the US-led coalition operation in Riyadh in May, whose forces were expelled in late 2014 from the Yemeni capital.

The war in Yemen, which some analysts describe as a proxy war between Saudi Arabia and Iran, has been deadlocked for years. Since February the Houthis have been conducting a large-scale operation to seize the oil-rich province of Marib, the last stronghold of the internationally recognized government in the north of the country. Its fall would be a disaster for the government and its patron saint, Riyadh.

The nearly eight-year-old war has plunged Yemen into what the UN calls one of the worst humanitarian tragedies on the planet. The survival of more than two-thirds of the population of the poorest country in the Arabian Peninsula depends on humanitarian aid. Tens of thousands of people, mostly civilians, have been killed and millions more uprooted, according to international aid organizations.