INTERNATIONAL RELATIONS
War in Ukraine | Overview of the conflict 20 days later
Defence Redefined
Published on 15/03/2022 at 16:35 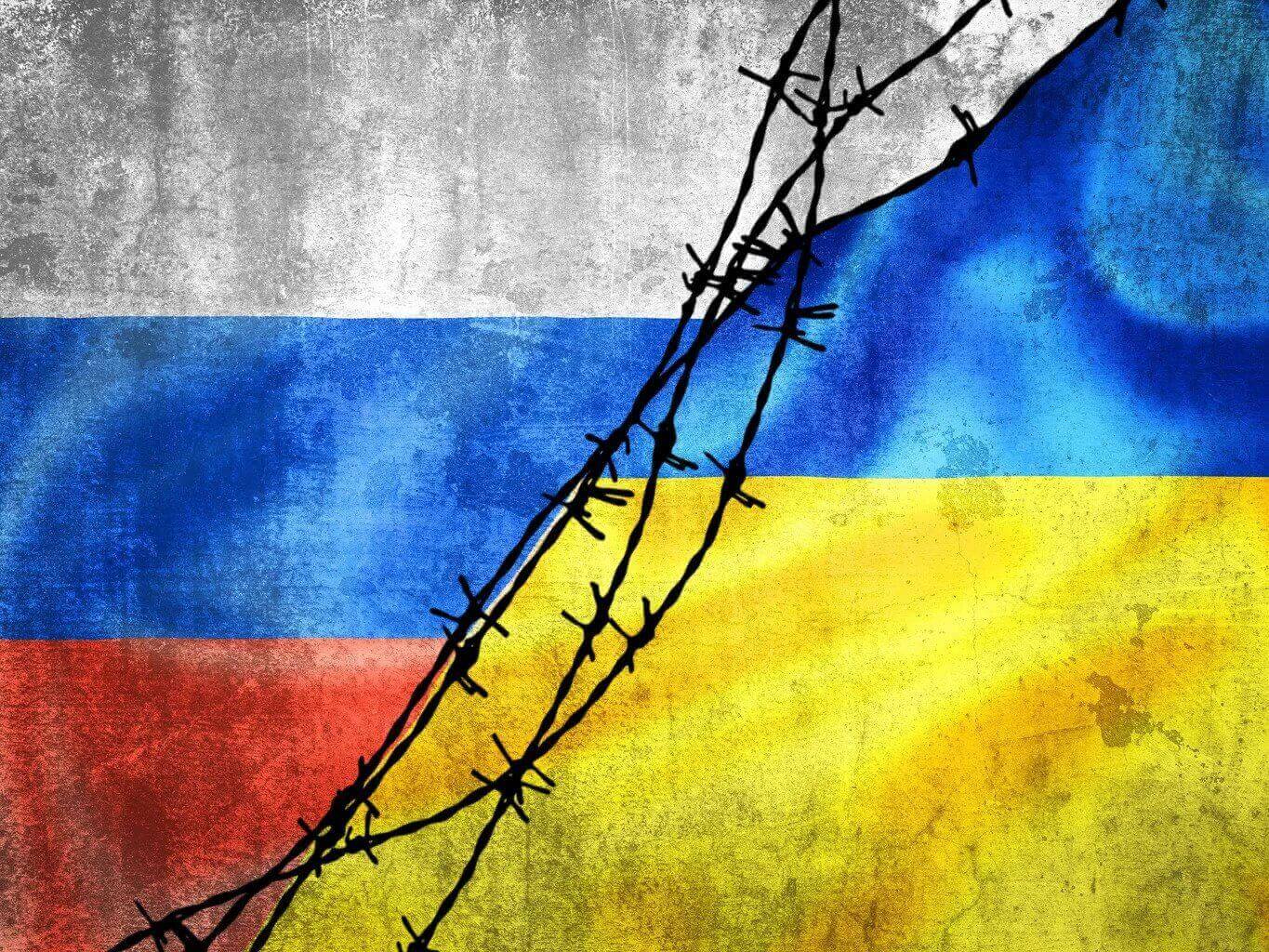 As the war in Ukraine is now on its twentieth day, we present an overview of the conflict and what preceded it through maps and infographics where possible.

In his speech, Russian President Vladimir Putin announced the launch of a “special military operation” with the ultimate goal of “demilitarization and de-Nazification” of Ukraine in response to the call of the two leaders of the Russian-speaking regions of Donetsk and Luhansk for help due to their people being persecuted and being victims of genocide by the Kyiv regime for eight years. 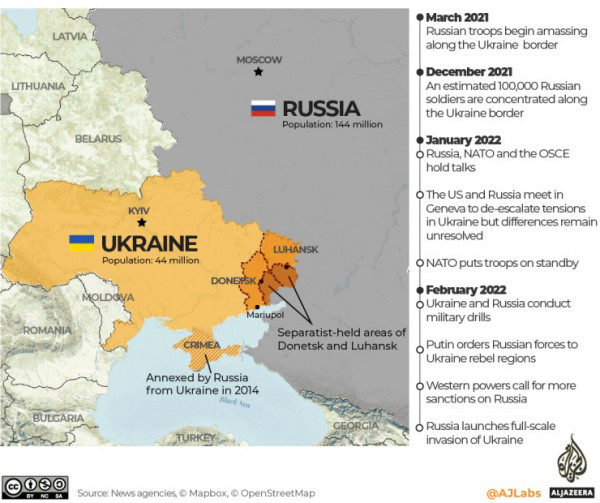 Who controls what in Ukraine? 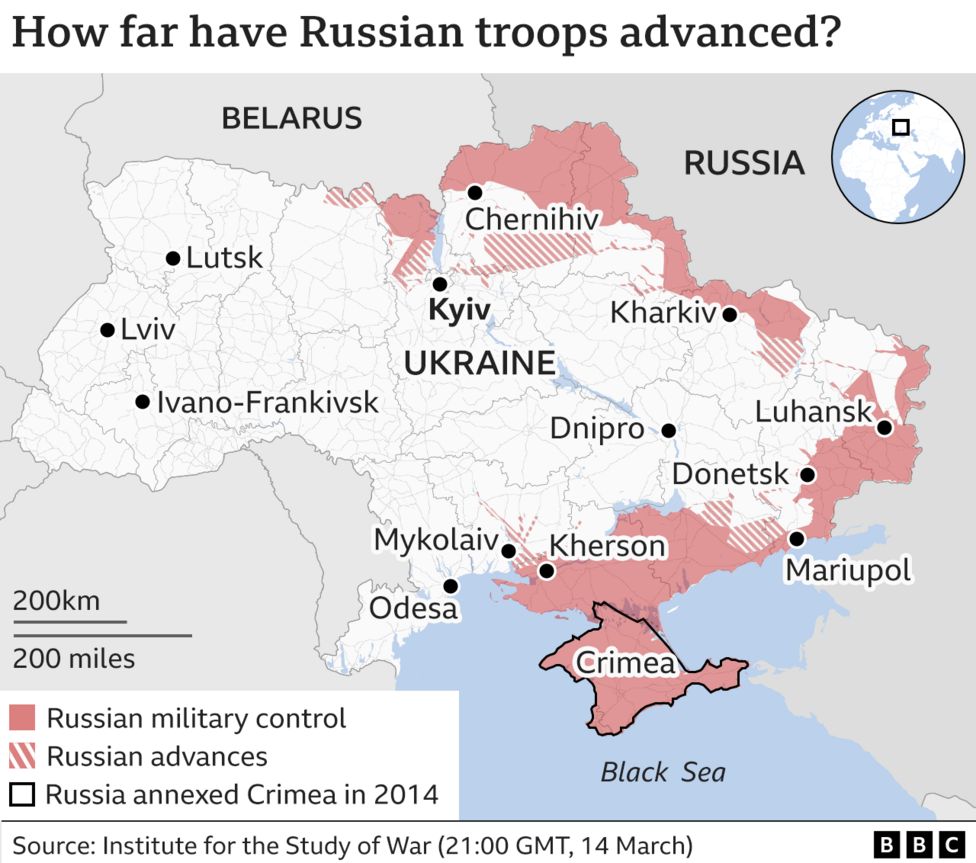 Russia launched its offensive in the early hours of February 24 from three main positions: the North, the South, and the East. Targets across Ukraine have been attacked from land, sea, and air and via cyberattacks, while on the other hand Russian troops continue to face continuous Ukrainian counterattacks and increasing casualties.

Russia’s navy has also cut off Ukraine from maritime trade by controlling the Black Sea coast, according to the UK Department of Defence.

The front in Kiev 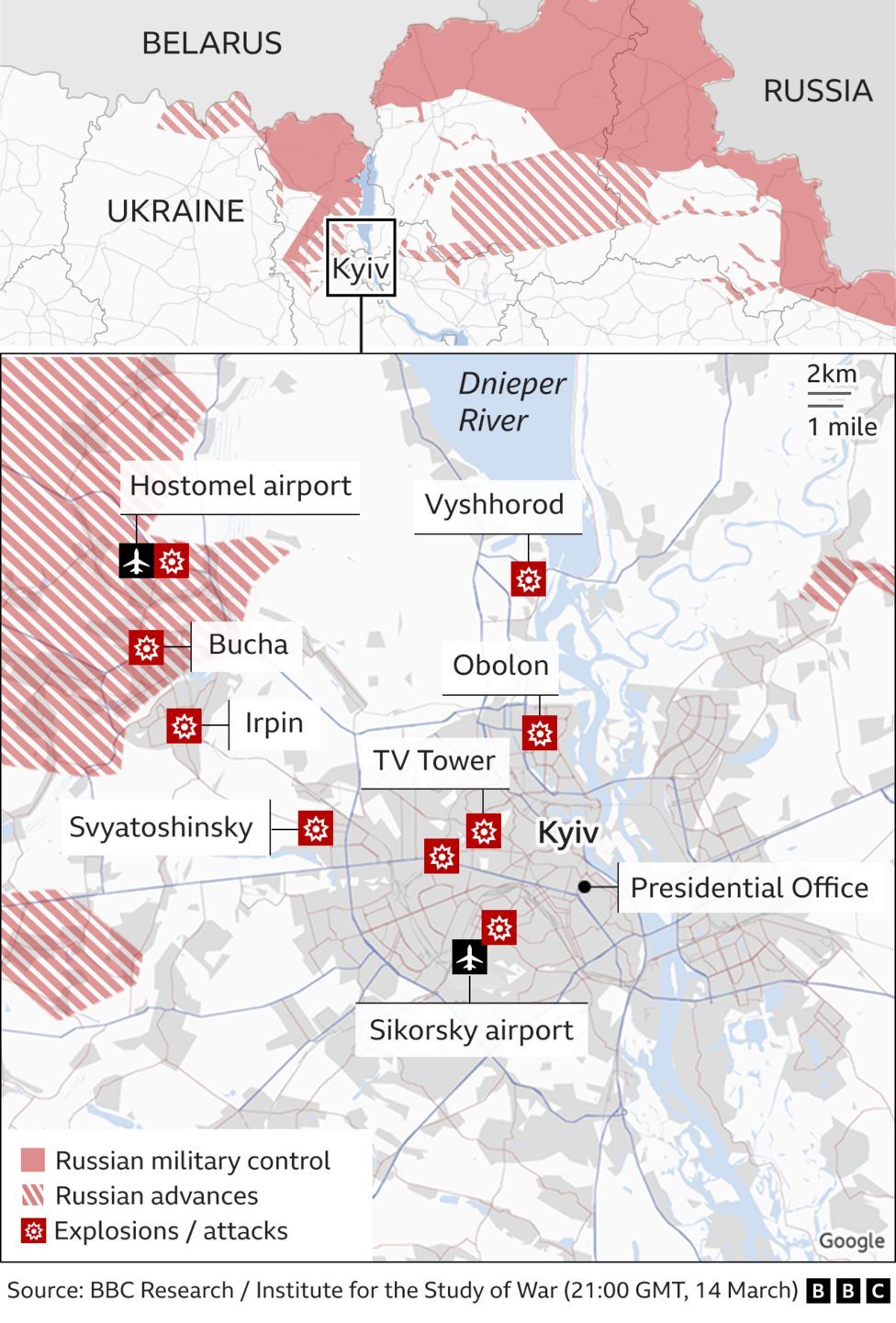 Russian forces are trying to encircle and cut off the Ukrainian capital, with troops now moving towards the city from multiple positions. Ukrainian generals say they are fighting to keep Russian artillery out of town.

Russian forces launched several attacks northwest of the city on Monday around Bucha and Irpin but attempts to cross the Irpin River failed.

Russian forces tried unsuccessfully to build a floating bridge over the river. Ukrainian troops blew up the main bridge connecting Irpin with Kyiv at the start of the war in an attempt to slow the Russian advance.

A Russian 40-mile armored convoy has now been dispersed (taking up battle positions) in the western part of Kyiv, moving more artillery systems and rocket launchers within range of the capital.

The city is preparing for a ground offensive, with Ukrainian forces and volunteers building new defence posts and barricades on major highways to slow down any Russian attack.

There have been no attempts so far by Russian forces east of the capital, where rivers and extensive swamps are thought to make a possible attack on Kyiv much more difficult.

Slow Russian Progress in the North 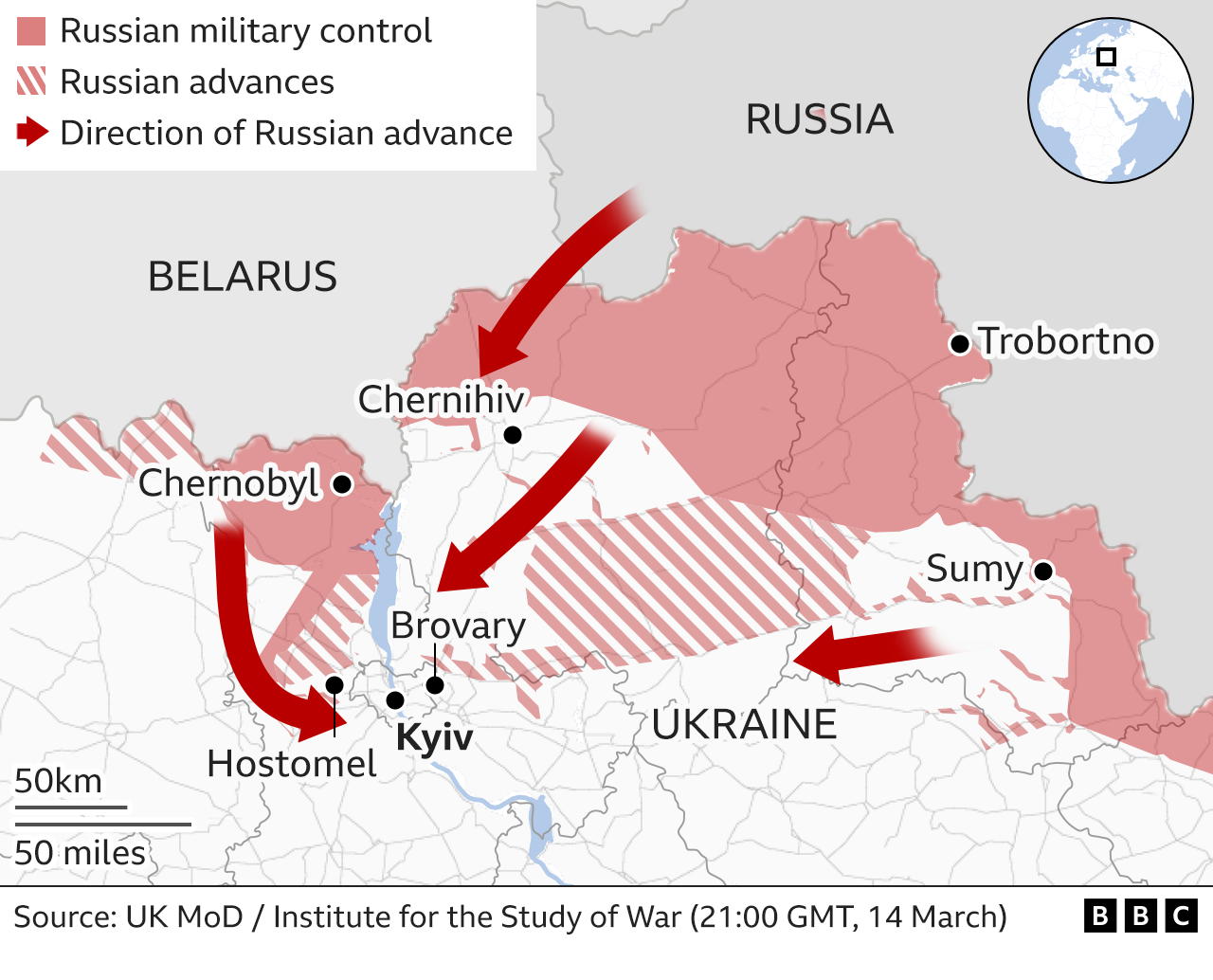 Although Russian troops have been advancing on the outskirts of Kyiv, their progress in the north has been slower than in the south. The main advance to the capital originally came from Belarus down the west bank of the Dnieper River via Chernobyl.

The Russian forces faced serious logistical problems, with many vehicles running out of fuel or due to maintenance issues other than those destroyed due to strong Ukrainian resistance.

Russian troops have surrounded the city of Sumy, bombed critical infrastructure, and cut off supply routes. The local governor says a humanitarian corridor has been agreed upon that will allow people to leave the city and surrounding areas on Tuesday.

Artillery attacks on residential areas of Kharkiv are being investigated by United Nations (UN) experts for possible war crimes.

Major Russian gains in the south 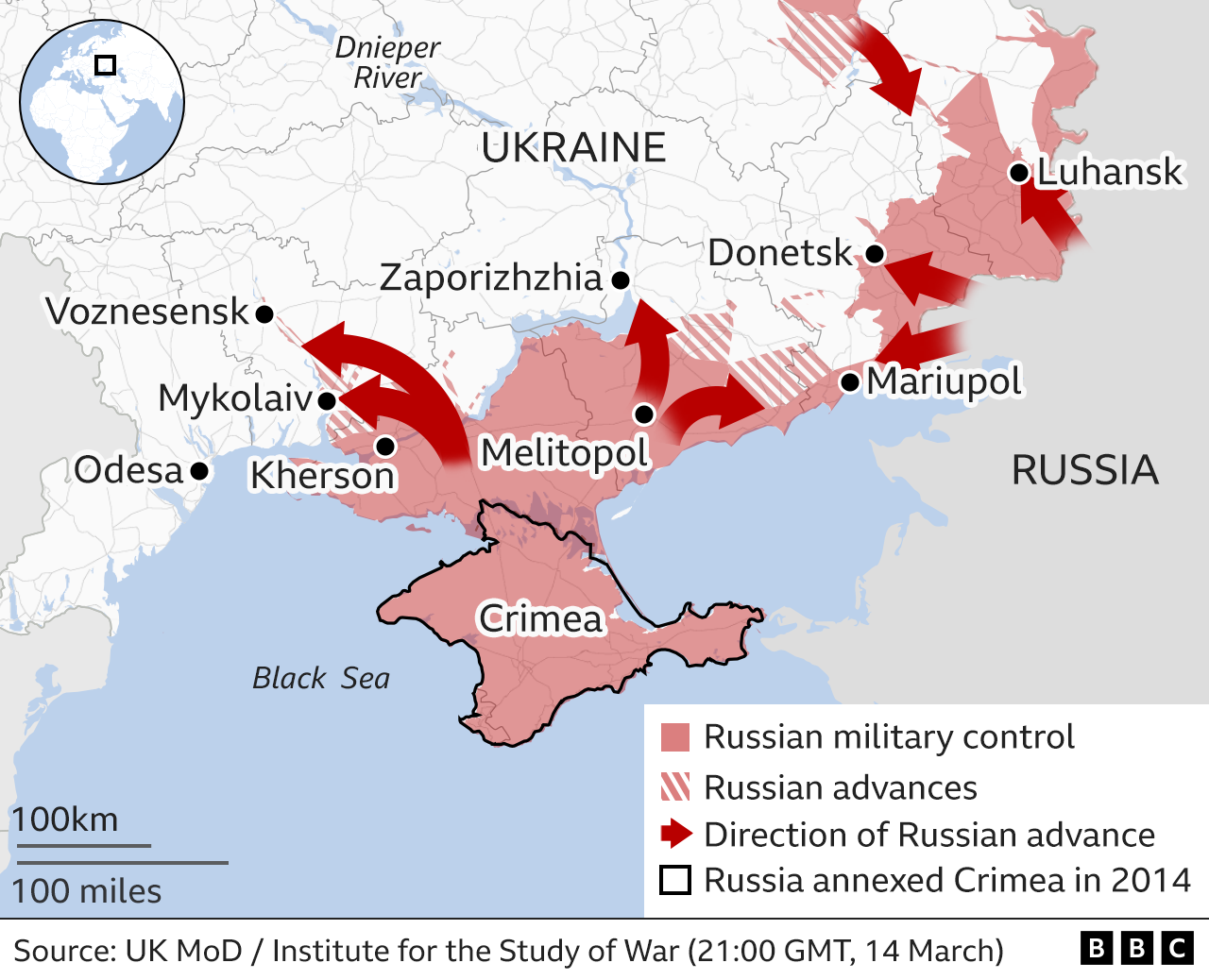 Russian forces have made rapid progress across the southern part of the country, moving east and west of Crimea.

In the southeast, there is growing concern about the hundreds of thousands of civilians trapped in the port of Mariupol, which is surrounded by Russian forces and has come under heavy fire.

Russian artillery has caused extensive damage and Russian aircraft are increasingly involved in the attack. Chechen leader Ramzan Kadyrov says 5,000 Chechen soldiers are fighting on the Russian side near the city.

A humanitarian convoy will head to the city next Tuesday to deliver “tens of tonnes of water, medicine, and food” to people trapped by dwindling supplies at low temperatures. About 160 vehicles managed to leave the city on Monday, according to local officials.

The Ukrainian Army says its forces have repulsed Russian attempts on the ground to seize the port city of Mariupol. Still, Russian forces are heading north in the direction of Zaporizhzhya, but are finding it difficult to occupy the city, while also reinforcing positions around Mykolaiv.

The BBC’s security correspondent, Frank Gardner, says the prize for Russia is the strategic port of Odesa in the southwest, which could cut off Ukraine’s access to the Black Sea.

Also read: Russia | Zakharova’s fierce attack to Greece – The response of the Ministry of Foreign Affairs

The Russian advance in the east 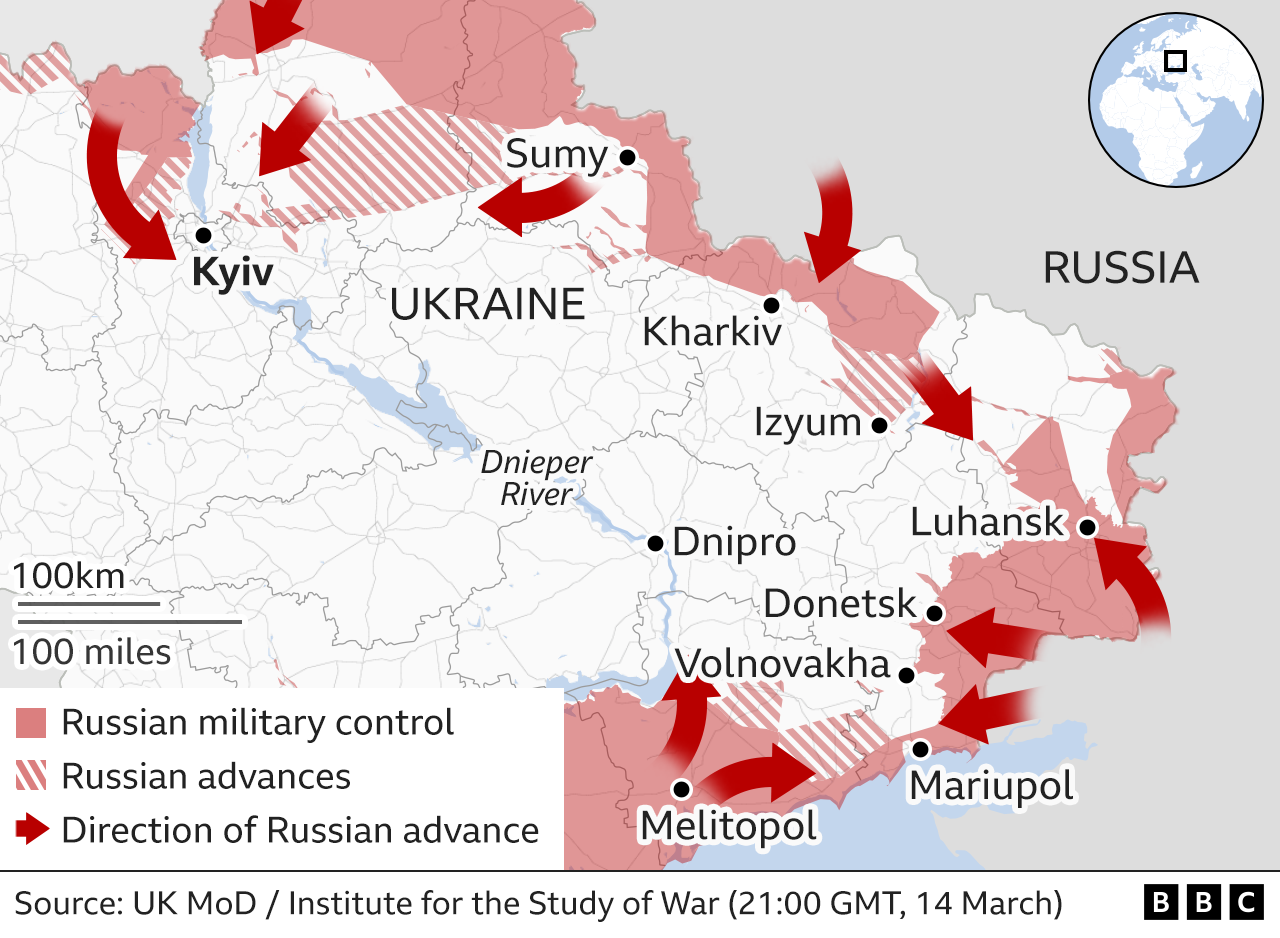 Fighting continues in the Donetsk region. It is reported that Russian forces are making steady territorial gains in the region. The Donetsk regional governor said there was almost nothing left of the city of Volnovakha as a result of the Russian attacks.

In neighboring Luhansk, Russian forces reportedly carried out several unsuccessful attacks in Severodonetsk. Dnipro has been under attack in recent days and is strategically important as a point of convergence for Russian troops coming from the south and east. 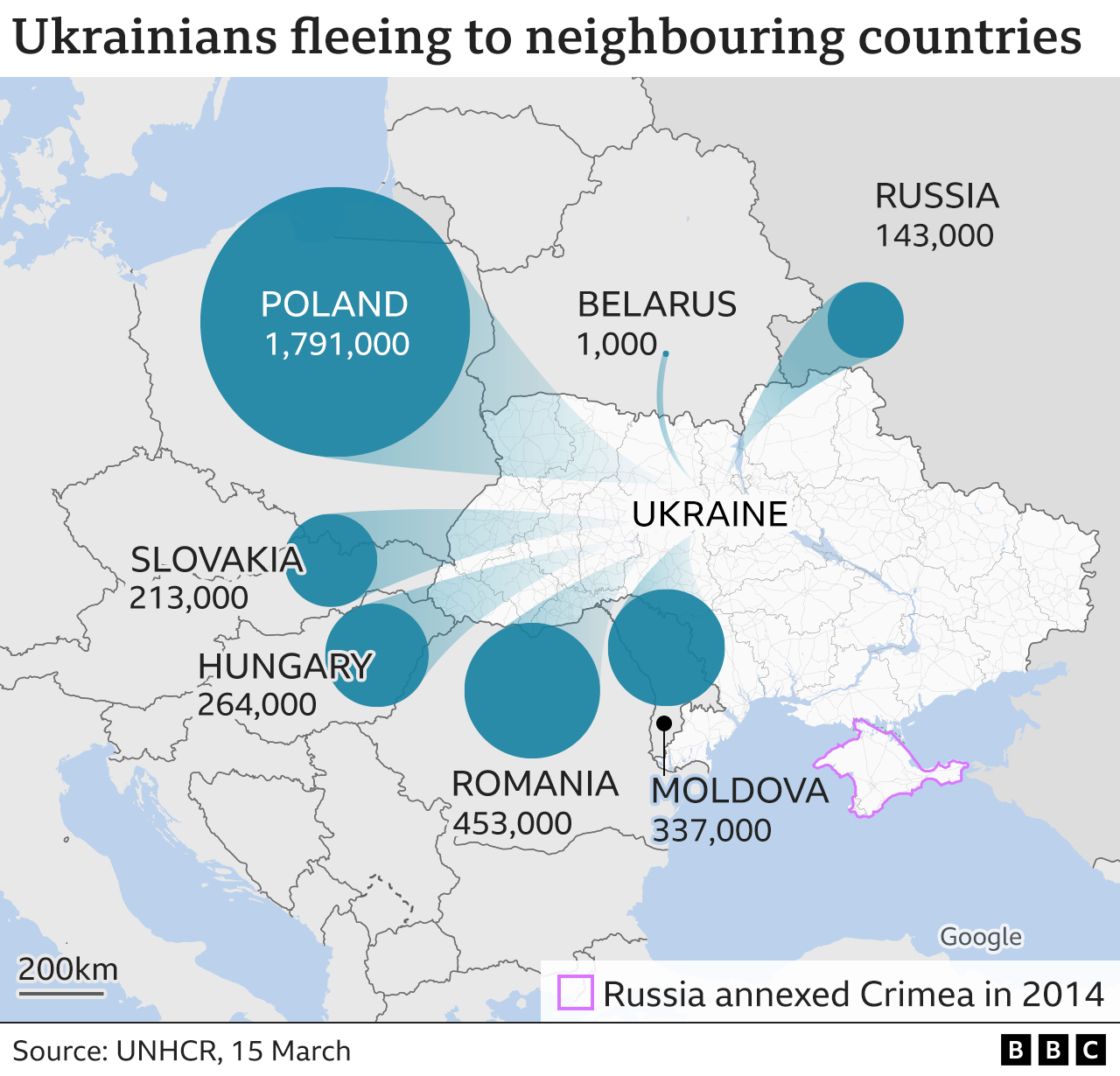 Since the invasion began, nearly three million people have fled Ukraine, according to the United Nations. It is the fastest-growing refugee crisis in Europe since World War II. Unicef, the UN agency for children, estimates that about half of them are children and young people.

Most of the arrivals were women and children. All men between the ages of 18 and 60 are not allowed to leave Ukraine so as to stay and fight. 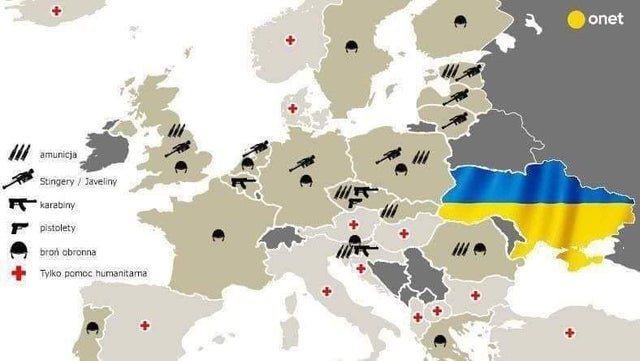 As Ukraine strongly resists attacks by Russian troops, President Volodymyr Zelensky is in constant contact with Western leaders seeking help to repel Moscow. As he had typically said “I need weapons, not means of transportation”, in a US proposal to help him leave Kyiv.

Belgium, Canada, the Czech Republic, Estonia, France, Germany, Greece, Latvia, Lithuania, the Netherlands, Portugal, Romania, Slovakia, Slovenia, the United Kingdom, the United States, and many other countries have sent or are in the process of approving shipments of military equipment to Ukraine, including anti-tank and anti-aircraft missiles as well as financial and humanitarian aid.

Since its independence, Ukraine has sought to rid itself of Russian heritage and to forge closer ties with the West.

For the past 30 years, Ukraine has been governed by seven presidents. The country had a difficult path to democracy with two uprisings, first in 2005 and then in 2014. Both times, the prevailing political direction was against Russia and in favor of a direction of membership in the European Union and NATO.

Russia, on the other hand, has been led by three presidents, with Putin in power for 17 years. In 2021, Putin signed a law effectively allowing him to remain in power until 2036, repeatedly claiming that Russians and Ukrainians are one as part of the historic “Russian culture” that also includes neighboring Belarus. The Ukrainians reject his claims.

The war in Ukraine is raging for the 20th day, with the negotiations showing no signs of progress yet. At the same time, Russian forces continue to strike Ukrainian cities, resulting in civilian casualties and infrastructure leveling. The tragedy continues…

With information from: Institute for the Study of War, BBC News, UN, Al Jazeera, defenceredefined.com.cy

Also read: Ukraine | Day 3 of the conflict – All developments