INTERNATIONAL RELATIONS
Ukraine | Day 3 of the conflict – All developments
Defence Redefined
Published on 26/02/2022 at 17:41 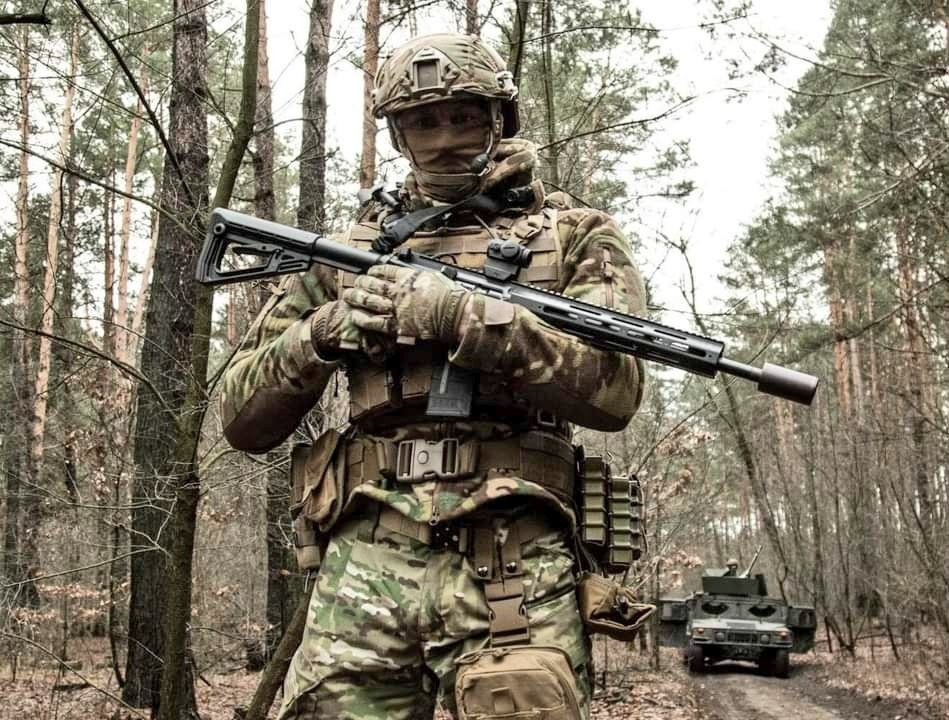 The horror of war continues in Europe after the announcement of Russia’s launch of “Special Military Operation”, announced by President Putin in the early hours of Thursday. Russian forces have reached the outskirts of Kyiv where fighting is taking place a few kilometers from the city center.

The map below shows the positions being struck. The entire Ukrainian territory is under constant fire, which aims to divide the Ukrainian forces with the ultimate goal of handing over the capital along with everything this entails. 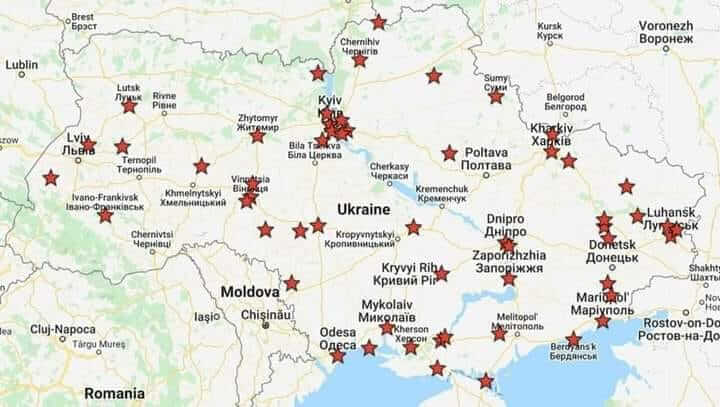 Briefly, the operations on the fronts are as follows: 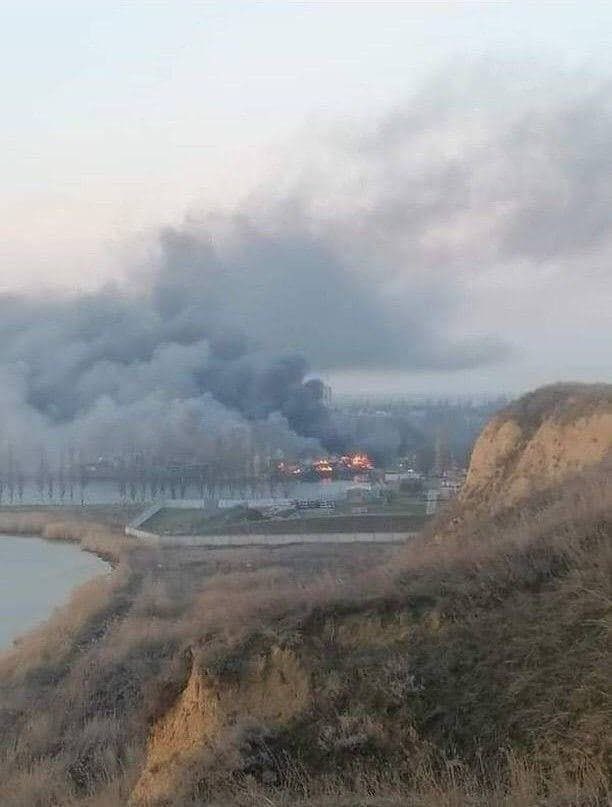 The next map lists the possible axes of the Russian invasion with the occupation of Kyiv being the first objective, while secondarily it seeks to exclude Ukraine from any access to the sea and divide it into two, centered on the Dnieper River. 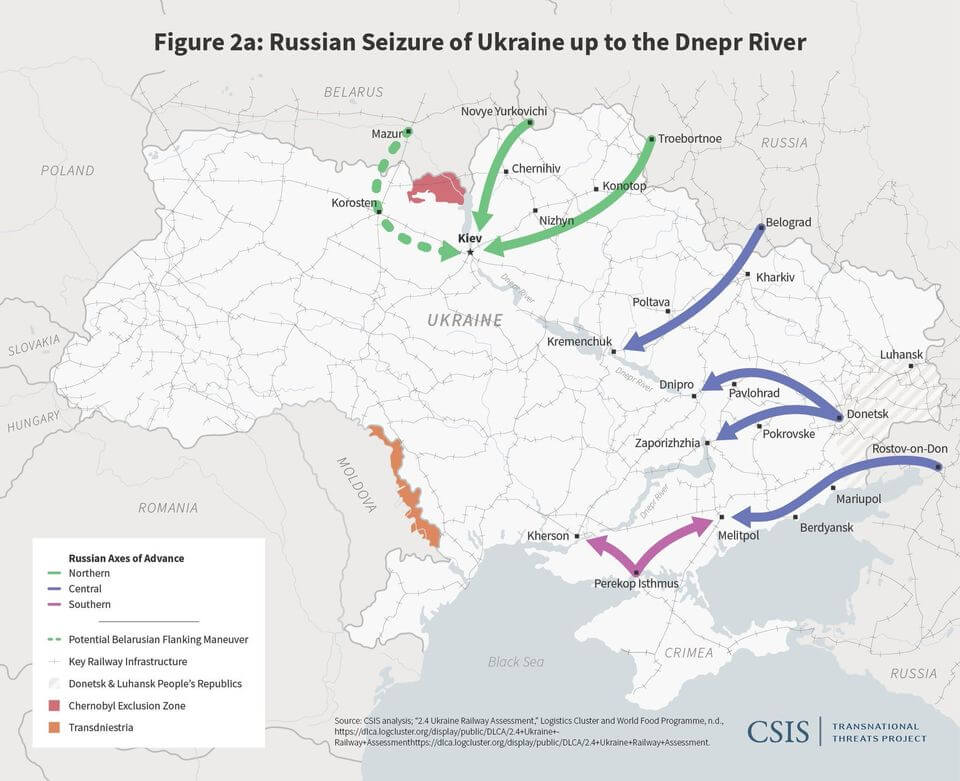 The first targets hit by the Russian attack were the basic infrastructure of the Ukrainian forces, followed by the ground deployment and advancement of Russian troops.

In detail, Russian troops have already entered the Eastern Front since February 22, when the independence of the Donetsk and Luhansk regions from Moscow was recognized. International media outlets have reported that Russian troops have reached the Donbas region, where Russian attacks and artillery airstrikes are taking place.

In the south of the country, the base of Russian operations seems to be Crimea, which was annexed by Russia in 2014. From there, Russia attempts a naval blockade of Ukraine and conducts land operations in Odesa. The occupation of the port city by the Russian troops effectively excludes Ukraine from any access to the sea.

Finally, in the north, information indicates that Russian troops have arrived near Kyiv, making the occupation of the Ukrainian capital more likely. The territory of Belarus served as the base for Russian tanks. Clashes also broke out at Kyiv’s airport and in the Chernobyl region.

The results of the Russian advance are shown in the following map: 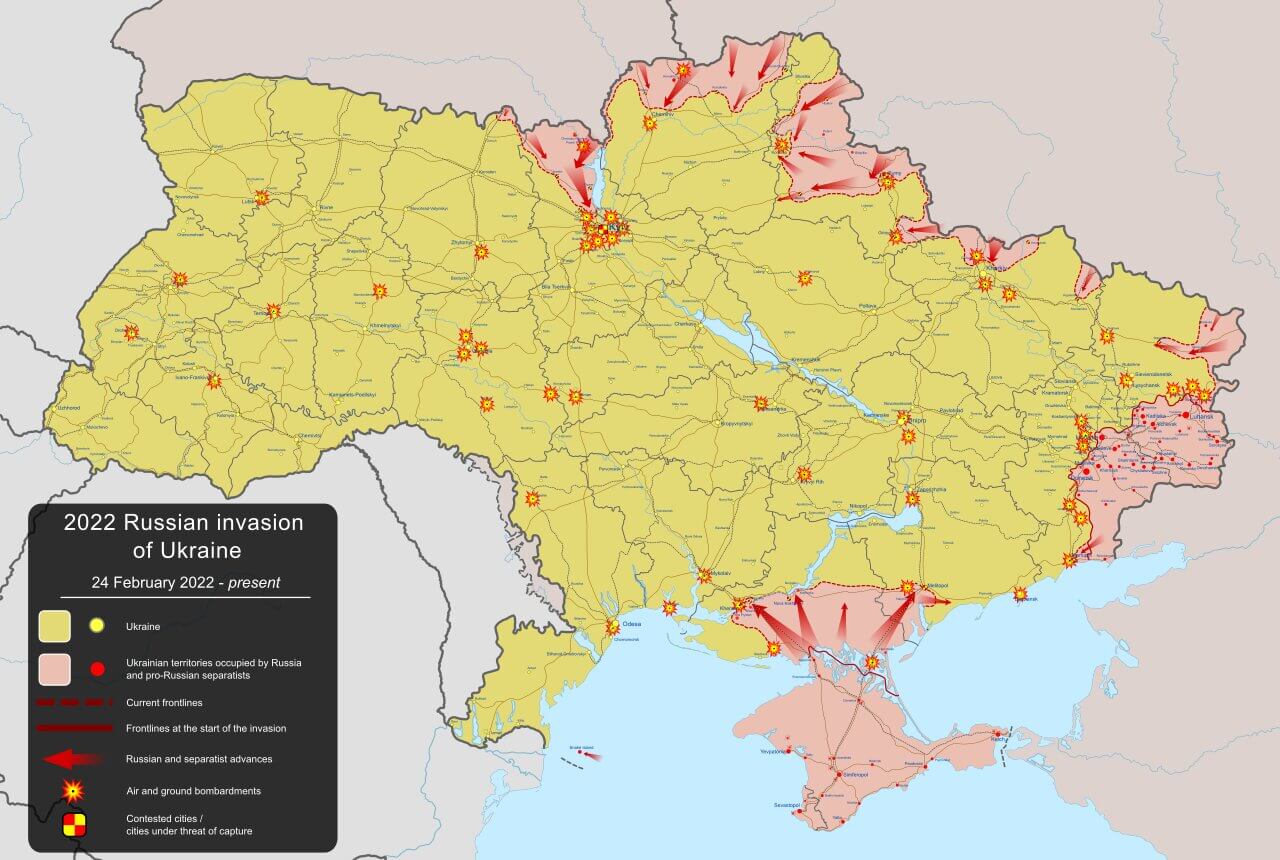 As it can be seen, the Russians are moving on the Dnieper River. The river divides Ukraine into two, both geographically and ethnologically, and may be a reference point for future consultations, although currently, this is very difficult to predict.

In the diplomatic arena, Russian President Vladimir Putin made new statements earlier, which were broadcast on Russian state television, urging Ukrainians to lay down their arms. He also described the Zelensky government as a “neo-Nazi group” holding “the entire Ukrainian people hostage”; statements showing that Russia is invading both for land grabbing and regime change, wanting both the demilitarization and neutrality of the country.

Also read: Ukrainian Issue | The Parliament condemns by resolution the invasion of Russia in Ukraine – Impact on the Cyprus problem

Earlier, Ukrainian President Volodymyr Zelensky in a new speech appeared ready for talks with Vladimir Putin. Moscow has called for the talks to take place in Minsk, with Kyiv saying it wants to hold talks in Warsaw.

For hours, Ukrainian President Zelensky did not communicate with anyone and rumors has it that he had left for Poland. Later, he appeared in a video with high-ranking government officials, stating that “we are all here and we are defending our independence.”

At present, there is already an exchange of fire between the two sides near government buildings in Kyiv, while photos show Ukrainian soldiers having taken up fighting positions in the streets, waiting for the invasion of Russian forces. Of course, looking at the photos in question, as shown below, the shots were mostly taken for communication rather than military purposes, since the hoplites appear to be lying in a prone position with no cover except for some vehicles. 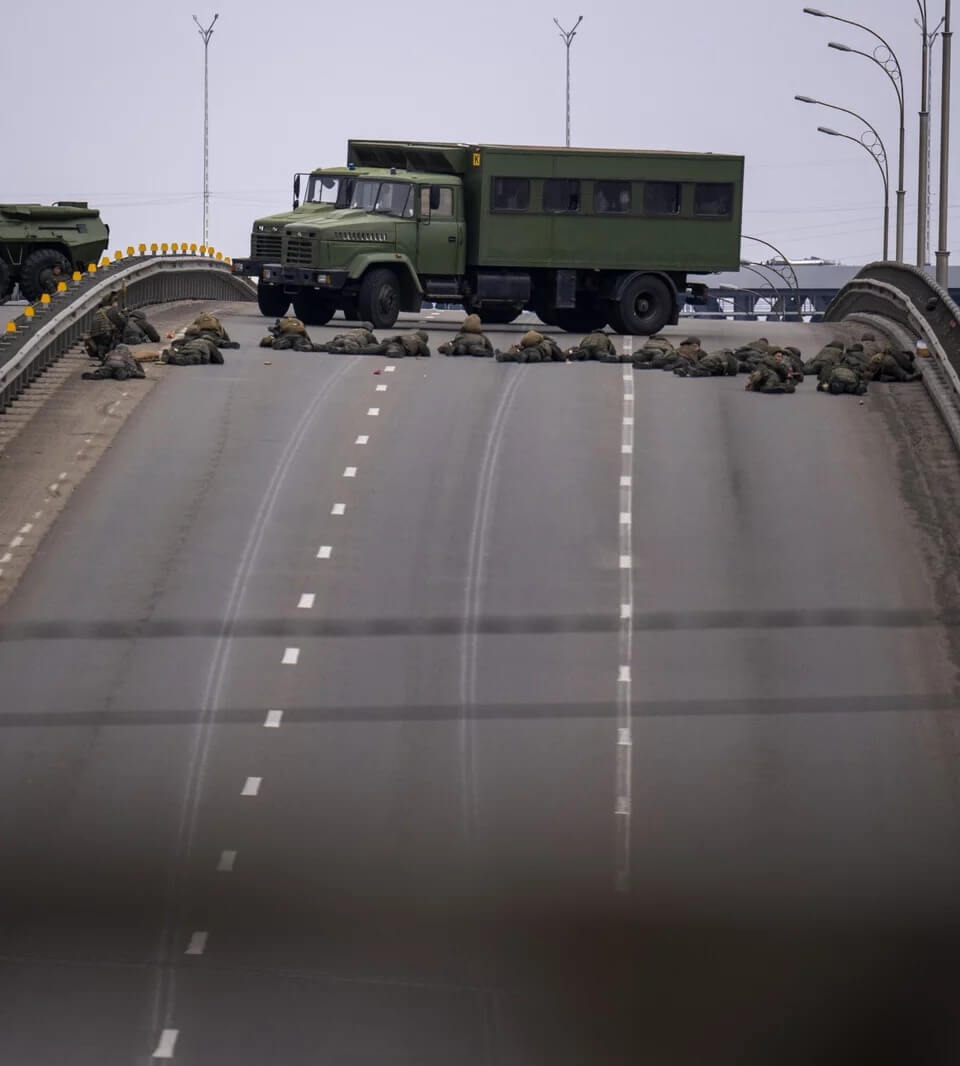 On the other fronts, Russia does not seem to have advanced further.

Regarding the international support that Ukraine receives from abroad and the shipment of military equipment from various countries, including Poland and Slovakia, as well as the closure of several countries’ airspace for Russia, see the picture below: 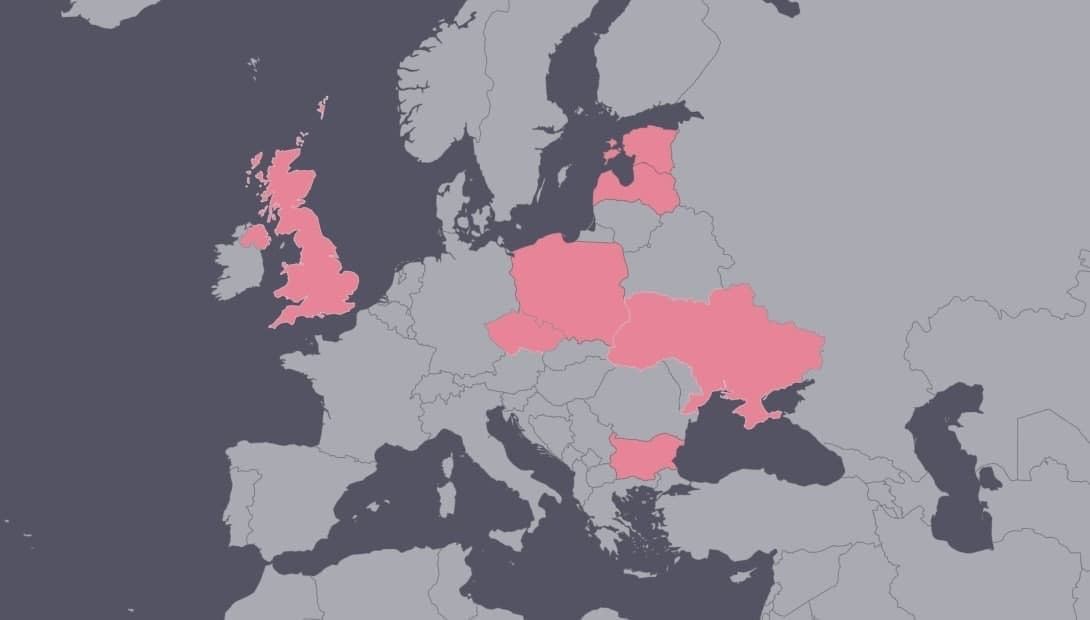 The information broadcast by international media refers to at least dozens of dead so far, the exact number of which is still unknown while it is certain that there are civilians among the dead.

From the Ukrainian side, the announcements about the losses of the Russian Forces that have been published are particularly shocking in terms of the number of casualties:

The announcements from Russia are made mainly by state media and social media.

According to Sputnik, citing the Russian Ministry of Defence, Russian forces have destroyed 821 Ukrainian military targets so far this morning.

The spread of fake news is something to be expected from both sides which aims to make it difficult to assess the actual developments, while being part of information warfare (related article below) it tries to influence the public. A classic example is yesterday’s news from the Ukrainian side that the fighters on the island of Fidonisi fell fighting, denying their surrender, while today’s video from the Russian side seems to refute it.

The Ukrainian announcement (the Ministry of Foreign Affairs is the official source):

Russia blatantly captured Ukrainian island #Zmiinyi, destroying the infrastructure. All 13 🇺🇦 border guards were killed, refusing to surrender. They will be awarded the title «Hero of Ukraine» postmortem, says @ZelenskyyUa

The situation on the fronts is dynamic and constantly changing. The DEFENCE ReDEFiNED team monitors all developments and updates you. Stay tuned with us for the latest news. You can also follow us on Twitter (click) for live information.