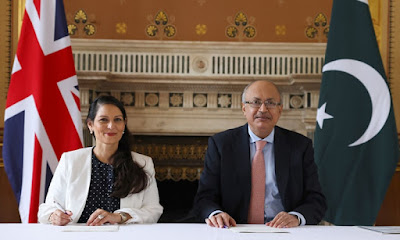 Under the new deal, Pakistani nationals, who do not have a legal right to remain in the UK, including criminals, rejected asylum seekers, and illegal immigrants, will reportedly be returned to Pakistan.

UK Home Secretary, Priti Patel, welcomed the development on Twitter, saying that she was proud to have signed a landmark new deal with Pakistani friends to return foreign criminals and immigration offenders from the UK to Pakistan, adding that this deal shows the “New Plan for Immigration” in action and the delivery of the government’s promises to the British people.

In fact, she went on to say that she makes no apologies for removing dangerous foreign criminals and immigration offenders, who have no right to remain in the UK. The British people are rightly disgusted by people who abuse their laws and game the system.

A statement by the High Commission of Pakistan said the agreement renews and updates, in a bilateral context, an earlier agreement between Pakistan and the European Community on the readmission of persons staying without permission, which was decided in October 2009. The bilateral agreement was necessitated by the United Kingdom’s withdrawal from the European Union.

The agreement underscores both countries’ continuous commitment to addressing the issue of illegal immigration and the significant threats it poses to both nations.

Also read: N. Mitarakis | Minister of Immigration and Asylum off to Pakistan

Although Pakistan has sought an extradition treaty with the UK for years, this deal falls short of that. Some lawyers see it as a blow to Pakistan, which may now see an influx of criminals deported from the UK, even those who have never visited Pakistan.

Immigration law expert, Mohammad Amjad, told Dawn newspaper (the largest and oldest English-language newspaper in Pakistan), that this is a very negative step for Pakistan.

According to him, last year, the Pakistani government was presented with this agreement and refused to sign it, because it will essentially allow the deportation of major criminals to Pakistan without sharing critical information, which will create huge problems for Pakistan.

Mr. Amjad cited the case of Sohail Ayaz, a convicted pedophile, and child abuser, who was deported to Pakistan from the UK, but took advantage of the absence of an intelligence-sharing mechanism and continued his criminal activities in Pakistan.

In 2019, he was arrested for raping and assaulting up to 30 minors, despite being convicted of similar offenses by a British court in 2008.

The deal with Pakistan appears similar to deals signed with Albania, Serbia, and Nigeria where, according to them, illegal immigrants and criminals will be removed from the UK.