Trump continues to claim that he will win the elections and repeats fraud allegations – VIDEO
Defence Redefined
Published on 06/12/2020 at 12:05 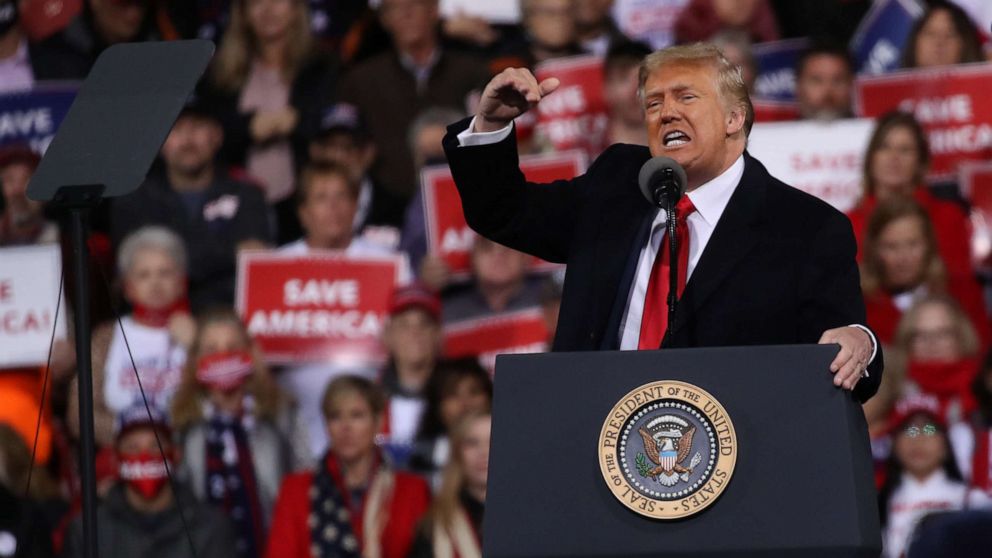 Last Saturday night, Donald Trump continued to claim that he will win the elections and did not fail to repeat the fraud allegations in the recent elections according to which he lost to Joe Biden.

Trump traveled to the state of Georgia to support two outgoing Republican senators facing crucial by-elections on January 5. These elections jeopardize the majority of the US Senate and therefore the balance of power in Washington when Joe Biden takes office on January 20. If these senators, Kelly Lefler and David Perdue, “do not win, nothing can stop” the Democrats, Donald Trump shouted. “You have no idea to what extent the situation will worsen,” he continued.

However, he devoted most of his speech to the November 3 presidential election. “We will win this election,” the outgoing president said in front of hundreds of supporters gathered outside Waldosta, with few wearing masks.

“They will try to convince us that we lost. We did not lose,” he told the crowd, shouting “We love you” and “Four more years.” “This election was fraudulent,” Trump said.

The Republican tycoon has not admitted his defeat by Biden and instead repeatedly denounces, without any evidence, widespread fraud. Courts across the US have rejected many lawsuits from his team of lawyers. At yesterday’s rally, accompanied by his wife, Melania Trump, Trump recalled his November 3 election victories in key states, Florida and Ohio, and then added, contrary to the official result: “We also won Georgia, it was good.”

Trump again sharply criticized his former Republican ally, the governor of Georgia, Brian Kemp, and called on him to check the ballots again. Trump has also attacked Republicans who do not support him, including Kemp and Secretary of State Brad Rafensperger.

Biden became the first Democratic president-elect since winning Georgia in 1992. After a nationwide recount of ballots, including a painstaking manual recount of some 5 million ballots that showed no significant irregularities, the election result has been verified and validated, giving newly-elected President Biden a landslide victory of 13,000 votes.

Earlier on Saturday, Trump telephoned Kemp and urged him to take further steps in the desperate battle of the tycoon to overthrow his electoral defeat. After Kemp responded on twitter that he “publicly requested three signature checks,” the Republican president said that was not enough and in a second tweet told him that the governor should immediately convene an emergency meeting of the state legislature.

In an unprecedented move in modern US history, the Trump administration has tried unsuccessfully to lead Republican-controlled legislatures in Biden-winning critical states to ignore the election results and declare the Republican president the winner.

Biden won the election, securing 306 High Electors against Trump’s 232. The Electorate will convene on December 14 to formalize the result.