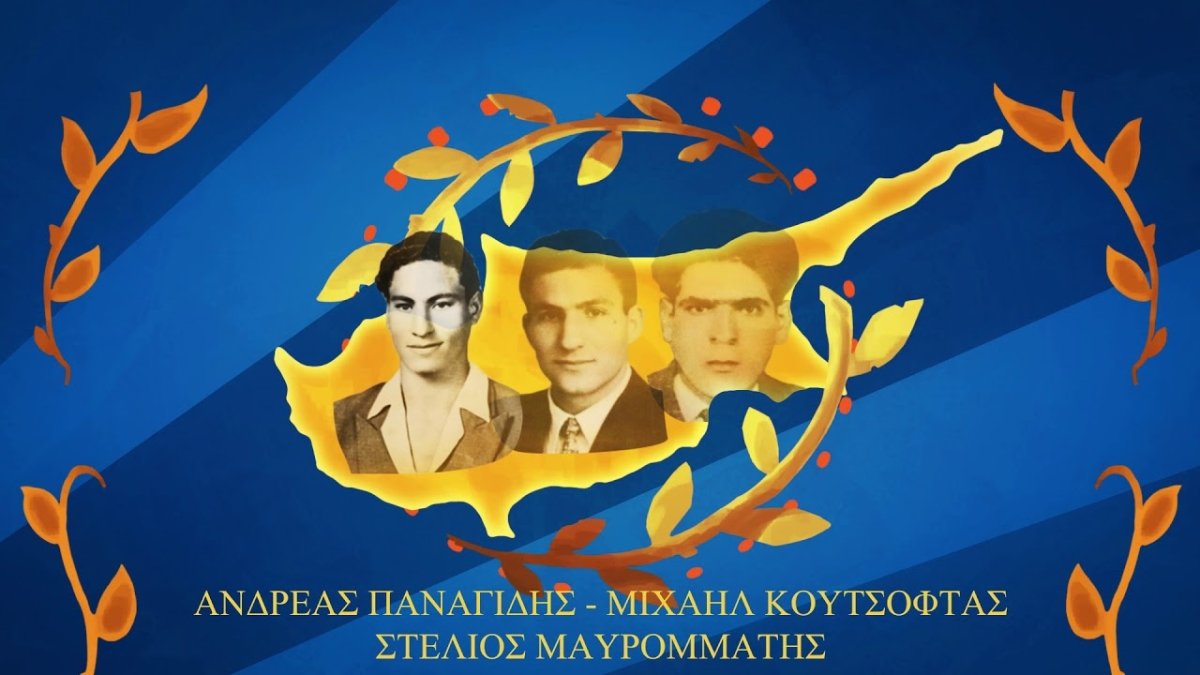 On September 21, 1956, three members of the National Organisation of Cypriot Fighters (EOKA) were led to the gallows by the English occupier. Stelios Mavrommatis, Michael Koutsoftas and Andreas Panagidis were executed on the same day in the Central Prisons, chanting the National Anthem and passing forever in the pantheon of the heroes of the long-suffering Cyprus.

Stelios Mavrommatis was born in the village of Larnaca of Lapithos, in the province of Kyrenia, on November 15, 1932. He finished primary school in his village and the Samuel School of Commerce in Nicosia. He worked for two years in the British army in Suez and then at the English airport in Nicosia as a clerk until his arrest. He was a member of the committee of the unions SEK and THOI in his village, in the establishment of which his father had a major role.

At the beginning of the struggle he joined EOKA and took part in a sabotage operation against British planes. He also contributed substantially to the collection of hunting weapons by individuals in the Nicosia area. He was particularly active in the area of ​​Ledra and Onassagorou streets, which the British had called the “mile of death”. Among his collaborators was his cousin Evagoras Pallikaridis. His parents and siblings were close associates in transporting and hiding weapons, as well as in hosting and fleeing wanted persons.

Also read: Evagoras Pallikaridis – The last hero of the gallows

In an unsuccessful attack of himself and his two companions against the British sergeant Normal Alfred and the aviator Lawrence Leith of the British Royal Air Force on Agios Pavlos Street he was arrested.

Michael Koutsoftas was born in Paliometocho, in the province of Nicosia, on November 12, 1934. He graduated from the elementary school of Paliometocho and worked in a textile industry as a weaver.

On May 16, six days after the execution of Karaolis and Dimitriou, after passing by priest Lefteris and asking him to stand as a protector for his sister, should he was arrested, he left with his friends Andreas Panagidis and Paraskevas Hoiropoulis, for Nicosia airport. There they attacked and killed the English squadron leader Patrick John Hale inside his office. They were pursued and arrested by British troops. Hoiropoulis was sentenced to life imprisonment as a minor.

Also read: May 10, 1956 | The hanging execution of EOKA heroes Karaoli and Dimitriound Dimitriou

Andreas Panagidis was born in the village of Paliometocho, in the province of Nicosia, on November 14, 1934. He finished the elementary school of Paliometocho and worked in the kitchen of the English army at Nicosia airport.

Panagidis’ first action was to raise the Greek flag. During the search an English soldier conducted in Andreas’ bag, at his place of work, immediately after the execution of Karaolis and Dimitriou, a Greek flag was found. The English soldier asked Andreas to wipe his shoes with it. The insult that Andreas felt was so great that he fought with the soldier, beating him badly. When he went home, he sent his wife to bring him the revolvers he had previously asked her to hide.

The next day, when he went to work at the airport, along with Michael Koutsoftas and Hoiropoulis, they attacked and killed the English squadronman Patrick John Hale inside his office.

The three executed heroes were buried in the Cemetery of the Central Prison, next to the graves of Michalakis Karaolis, Andreas Dimitriou, Andreas Zakou, Iakovos Patatsos and Charilaos Michael.