The Battle at the Barn of Liopetri, also known as the “New Battle of Gravia”, was fought by EOKA Members Ilias Papakyriakou, Fotis Pitta, Christos Samaras and Andreas Karios, against British colonialism on September 2, 1958.

Fotis Stavrou Pittas was born in Frenaros village on February 28, 1935. He was a college student when he joined EOKA at the beginning of the struggle. He worked in Achna primary school, where he was strongly involved in the militant, organizational and information fields.

Christos Samaras was born in Liopetri village on February 12, 1925 and was married to Maria Samara. Together they had four children: Pavlos, Modestos, Eleni and Christofora.

In January 1955 he joined forces with Grigoris Afxentiou, took over the EOKA of Liopetri and recruited members. Once the armed conflict broke out, Christos Samaras took part in the attack that took place in Dekelia with the group of Grigoris Afxentiou. The British put a 5,000-pound price on his head.

Andreas Karyos was born on July 16, 1926 in Avgorou village. He became a member of EOKA and devoted himself to the recruitment of men, while he was the organizer of EOKA in Avgorou. He was arrested several times and when he was a prisoner in the Pyla detention center he escaped with his fellow prisoner Fotis Pitta. 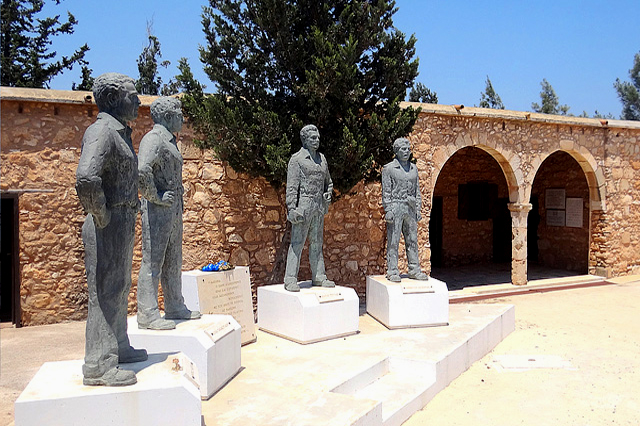 A Turkish officer accompanying the English detachment asked Kallis to show him around his barn. Kallis, trying to trick the soldier, showed him the kitchen instead of the barn, but after the British insisted and beat him, he showed them the stable and then the garage even though he was being beaten even more. Then Kallis turned to his family and told them to choose death over the betrayal of his four comrades. He did not have time to finish what he was saying and the British dragged him into the barn. One of the soldiers then took Kallis to cover and shouted in Greek: “If you wish to live, surrender!”

Another soldier fired three shots at the barn, but there was no response. A dramatic scene followed, where a Greek-Cypriot fighter was unable to endure the torture and was forced to confess that the wanted persons were inside the barn.

The British repeatedly called on the fighters to surrender. However, the fighters opened fire, killing a British soldier and shouting “Molon Lave!” (Come and get us!). In the ensuing battle the British threw grenades into the barn and the fighters returned fire. Two British soldiers climbed on the roof of the barn where they made a hole and threw clothes that had soaked in gasoline. The battle had lasted over four hours when the British called for a helicopter which dropped incendiary bombs.

When the fire threatened the lives of the fighters, they tried to break through, but all four fell dead. Panagiotis Kallis was then taken by the British Army to identify the bodies of the fallen.