Rear Admiral (Ret) Konstantinos Fytiris | The Thrace-Aegean-Cyprus front must be united
Defence Redefined
Published on 03/09/2020 at 18:00 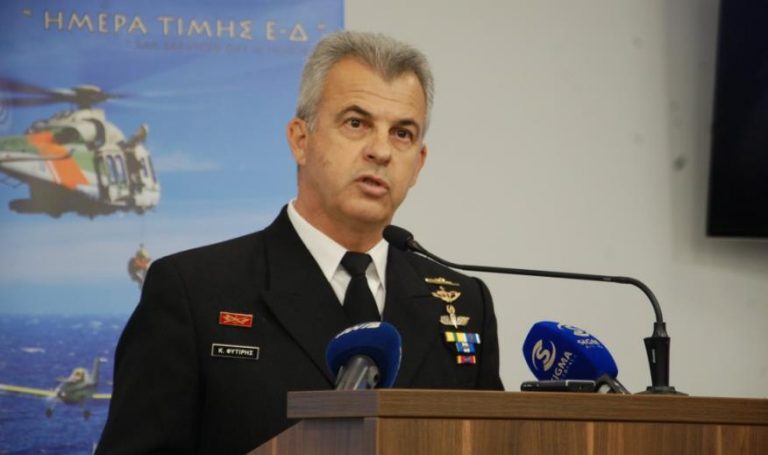 In statements on our website, Rear Admiral (Ret) Konstantinos Fytiris commented on the developments in the Eastern Mediterranean, the Cyprus EEZ and the Greek continental shelf, as well as the options of the Republic of Cyprus in the face of growing Turkish provocation.

Asked what Cyprus can do beyond the diplomatic actions, he said: “Unfortunately, Cyprus does not have the military power that Greece has to react and closely monitor the situation while sending messages to Turkey regarding its presence and that it does not accept the challenge.”

“We are at this level now, so I insist that the Thrace-Aegean Cyprus front must be united, otherwise Cyprus cannot do anything alone,” said the Rear Admiral.

He also pointed out that “All we can do is to resist in case we are attacked and fall for the sake of our dignity. Otherwise, achieving economic goals on our own in the face of Turkish military power is a utopia. If we had such capabilities we would have already attacked to get half of Cyprus back.”

Regarding the degree of readiness of the National Guard in the Turkish challenges of July and August in the Eastern Mediterranean, Mr. Fytiris explained that: “The alarms of the Armed Forces are to deal with a specific situation in a specific place. I know that the National Guard was in a state of readiness, but when you sound the alarm you will probably and unintentionally cause escalation since the occupying forces did not do so. So, instead of being prepared, you end up escalating the situation yourself.”

Analyzing Ankara’s moves, Mr. Fytiris expressed the belief that “Turkey has no intention and did not pursue a general conflict or the use of military force vigorously. Turkey wanted to intimidate, to challenge and in the end to form a gray area south of Crete and Kastelorizo, as it has done in Imia.”

Asked whether Cyprus should be equipped immediately, the Rear Admiral replied: “Let me just give you the idea. And the idea is this, that I have some military forces, and I want Greece to cover me with its own, that is, the Greek Armed Forces to act.

We must first think about how to maintain ceasefire and the second stage is how to secure an umbrella under which aid from Greece or another country will operate, which, although I consider it far-fetched, will get involved in this controversy.”

Also read: Interview with Dr. Daniel Pipes, on the occasion of the recent in Greek-Turkish tensions

“The point, however, is that the Republic of Cyprus must do anything in its power. It is unfortunately in our nature to ask others to sacrifice for us. We need to do anything in our power and then ask for help.”

Asked what action should be taken immediately by the military leadership, he expressed his view that: “Air defence is the key element. The enemy is already within Cyprus. We need a strong air defence that can survive.”

Regarding the recent decision of the US Secretary of State, Mike Pompeo, to lift the non-lethal weapons embargo on the Republic of Cyprus, Mr. Fytiris, in a public post on social media, expressed the view that, politically, it may be considered a positive step, however this is not enough.