Putin, Johnson and Erdogan call on Israelis and Palestinians to restrain themselves
Defence Redefined
Published on 12/05/2021 at 14:45 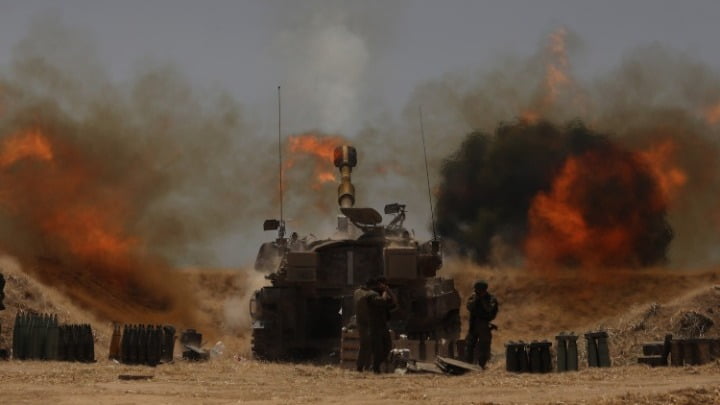 The Turkish presidency announced today that the Turkish President Recep Tayyip Erdogan and his Russian counterpart Vladimir Putin discussed developments in Gaza and Jerusalem, while Ankara is about to take international action against Israel.

Israel carried out hundreds of air strikes in Gaza this morning as Hamas and other Palestinian militants fired rockets across the border, in the deadliest shootout in years that has killed at least 35 people (55, according to the French Agency – AFP).

Erdogan told Putin that the international community must “teach a deterrent lesson” to Israel, adding that Ankara is about to mobilize that reaction, according to a statement issued by his office.

Erdogan also called for international peacekeepers in the region to help protect the Palestinians, a proposal Turkey has made in 2018.

For its part, the Kremlin said the Russian and Turkish presidents called for “de-escalation” in the new deadly conflict between Hamas and the Jewish state.

“They expressed their deep concern about the ongoing fighting, the number of dead and wounded,” the Russian presidency said. “Vladimir Putin and Recep Tayyip Erdogan have called on the parties to de-escalate tensions.”

British Prime Minister, Boris Johnson, also called on Israel and the Palestinians to “exercise restraint”, saying he was “very concerned” by “the growing violence and civilian casualties”, calling for an “urgent de-escalation”.

“I urge Israel and the Palestinians to show restraint. The United Kingdom is deeply concerned about the escalating violence and the civilian casualties and we hope that there will be an urgent de-escalation of tensions,” he tweeted from.

Meanwhile, a second Palestinian was killed today in clashes with the Israeli army in the West Bank, according to official Palestinian sources, against the background of the rapid escalation of violence in Israel and the Palestinian Territories.

In the North West Bank, a 16-year-old teenager, Rashid Abuara, was shot in the head and chest in the village of Aqaba, north of the city of Nablus, according to the Palestinian Ministry of Health.

There is currently no reaction from the Israeli army.

Earlier in the day, Hussein al-Titi, a 26-year-old Palestinian, was killed in clashes with the Israeli army in the southern part of the occupied West Bank. The Israeli army said it had been hit by Israeli Army fire at the al-Fawar refugee camp near the Palestinian city of Hebron.

The Israeli military said the incident took place during “operational activity” when “violent riots broke out” during which soldiers “spotted one of the rioters on a roof preparing to open fire against the troops.”

“Soldiers responded by opening fire,” the army said in a statement.