Panagiotopoulos | Greece is always ready to defend its sovereign rights 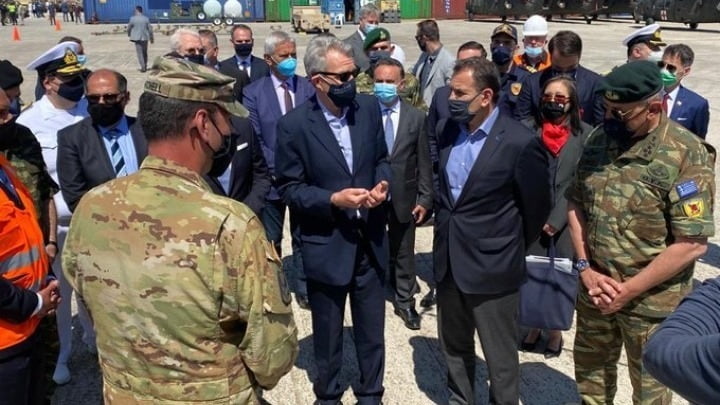 “… Greece is always ready to defend its sovereign rights and will do so decisively and effectively, if required,” announced the Minister of National Defence, Nikos Panagiotopoulos, at the port of Alexandroupolis today.

In his speech on the occasion of the distinguished visitors day of the “Defender Europe 2021” exercise, which took place at the port in the presence of the American Ambassador to Greece, Jeffrey Payat, Mr. Panagiotopoulos referred to the most tangible results of the port functionality upgrade, its key role in the transportation of personnel and equipment for this exercise, the potential of endeavouring large investments, the capabilities of transporting infrastructure and the road network of the wider region, while he also made special reference to the further strengthening of the existing Mutual Defence Cooperation agreement which will be reviewed this summer.

Positive results of the port upgrade

The Minister of National Defence expressed his delight “as the positive results of the upgrade of the port of Alexandroupolis are clearly visible, especially in terms of the potential of mooring large ships and, in turn, of loading and unloading heavy military equipment,” a fact which, as he said, “is proved by the pivotal role played by the port of Alexandroupolis in the transportation of personnel and equipment for the aforementioned ‘Defender Europe 2021’ exercise.”

Mr. Panagiotopoulos stated the belief that “… Alexandroupolis can now endeavour, due to its geostrategic position, large investments that include, among others, new infrastructure projects at the piers, refuelling terminal facilities, the connection with the railway network, but also with Egnatia Odos, as well as the continuous and planned expansion of ​​the NATO fuel pipeline in the area,” adding that “these investments will further contribute to the stimulation of the economic activity by creating new job vacancies and thus multiplying the benefits for our country, but especially for Alexandroupolis and the wider Eastern Macedonia-Thrace region.”

Referring to the transport infrastructure, Mr. Panagiotopoulos reiterated that along with the road network of the wider area, “they now create the conditions in order for the port of Alexandroupolis to be a strategic hub on a vertical axis to the north of express transportation of people and goods, also of particular importance for Europe’s energy security.”

“The exercise is added to a wide range of activities in the field of Greek-US defence cooperation, which is a strategic and, in turn, a mutually beneficial cooperation, inspired by the desire of both countries to contribute substantially to the security, stability and prosperity of the wider region. Greece and the USA, the USA and Greece have the common will to further strengthen this strategic defence relationship, in order to ensure, on the one hand, the maintenance of strong, efficient and interoperable Armed Forces and, on the other hand, to promote the economic development and prosperity of our country,” the Minister of National Defence stated. At the same time, he expressed his satisfaction “with the excellent level of the Greek-US strategic cooperation in the field of defence,” acknowledging “the most important contribution, commitment and tireless efforts, for this result” of the American embassy and especially its ambassador, Jeffrey Payat.

Regarding the further strengthening of this cooperation, the Minister of National Defence referred to the intention “to further strengthen, extend and deepen the existing Mutual Defence Cooperation agreement,” which, as he said, “is under review by the two countries, so that soon, in the summer, we will have its new revised form that will be even more efficient – similar to the efficiency we witness in everything around us – in the intensifying and deepening strategic relationship between Greece and the US through the Mutual Defence Cooperation agreement…”

Greece a reliable ally and ready to defend its sovereign rights

Emphasizing the great strategic importance of the Eastern Mediterranean, Mr. Panagiotopoulos said that “it offers increased prospects and opportunities for stability, growth and prosperity,” adding:

“But at the same time it is accompanied by common security challenges, security threats and other factors that need to be addressed with determination and unity by the parties involved.” Greece is a reliable, strong and consistent ally and remains a pillar of stability in the wider Eastern Mediterranean region, but also in the Middle East and North Africa. We always seek cooperation and relations based on international law and the principles of good neighborliness.

Today, with our presence in this important military activity but mainly with the potential for the increased possibilities of the port of Alexandroupolis in the intensification of these activities, we emphasize, from the remote Alexandroupolis in every direction, that Greece is always ready to defend its sovereign rights and will do so decisively but effectively, if required.”

Finally, the Minister of National Defence thanked all those involved in the project of upgrading the port of Alexandroupolis, as they saw the huge potential for the place. A project that will put “the Eastern Macedonian-Thrace region on the map even more strategically and dynamically”. “The Eastern Macedonian-Thrace region and especially Alexandroupolis really enters the map very dynamically as central, strategic reference points in the wider region with all that entails. There is still a lot of work to be done, but it will be done because the beginning had very optimistic results and the strategic relationship between Greece and the USA is expanding. Our work, our duty is to do what we can to deepen it, to strengthen it even more through such activities that are the practical proof that all this is no longer in theory but is proven and evolving dynamically in practice,” concluded Mr. Panagiotopoulos.

The event was attended by the US Consul in Thessaloniki Elizabeth Lee, the President and CEO of OLA, Costas Hadjimichael and Costas Hadjikonstantinou respectively, the Chief of the Hellenic National Defence General Staff, Lieutenant General Konstantinos Floros, the Chief of the Hellenic Army, Lt. Gen. Charalambos Lalousis, the MPs of Evros, Tassos Dimoschakis, Christos Dermentzopoulos, Stavros Keletsis, a delegation of the local authorities and the Metropolitan of Alexandroupolis, Mr. Anthimos.

Also read: The deployment of US Army units through the Port of Alexandroupolis is underway – Photo