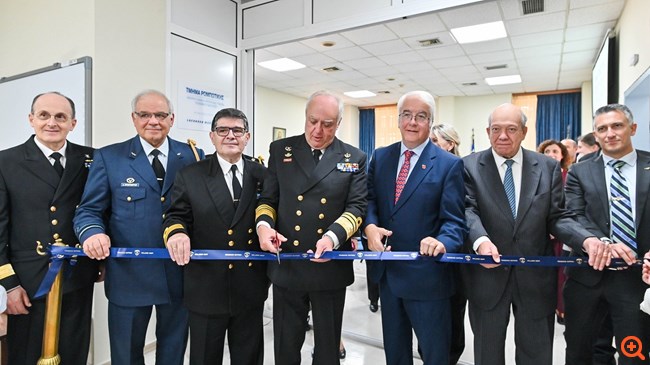 The inauguration ceremony of the new Robotics Department of the Children’s Special Care Center of the Piraeus Naval Hospital took place yesterday.

The new Robotics Department, a donation from Lockheed Martin Corporation’s non-profit STEM organization, aims to teach science and familiarize preschool and school-age children with new technologies and applications as well as the Hellenic Armed Forces personnel’s children with learning disabilities during adolescence.

Promoting STEM (Science, Technology, Engineering, and Mathematics) education is at the heart of Lockheed Martin. As an industry leader, Lockheed Martin, with a workforce of 60,000 engineers, scientists, and IT professionals, is committed to working with these groups to develop programs that educate and inspire tomorrow’s scientists, engineers, and mathematicians.

The Children’s Special Care Center of the Piraeus Naval Hospital provides assessment and intervention to children of the Hellenic Armed Forces personnel with learning difficulties.

Children will focus on a variety of robotics-related programs such as LEGO, mechanics, and algorithms, completing a curriculum entailing hundreds of hours of STEM activities.

Lockheed Martin has donated $50,000 to the Children’s Special Care Center of the Piraeus Naval Hospital in order to fund the establishment of a STEM department for children with learning disabilities, thus strengthening the hospital’s occupational therapy program.

With the contribution of 50,000 dollars from Lockheed Martin, the Center was able to set up a special classroom, and acquire the necessary equipment, hardware, software, and robotic kits, while, at the same time, it proceeded with a training program for the required teachers and personnel that will support the STEM education for dozens of 5-15-year-olds.

STEM Education will deliver the lessons this year to the children and train hospital personnel on how to run the lessons, to enable the program to be sustainable and self-sustaining after its first year of full operation.