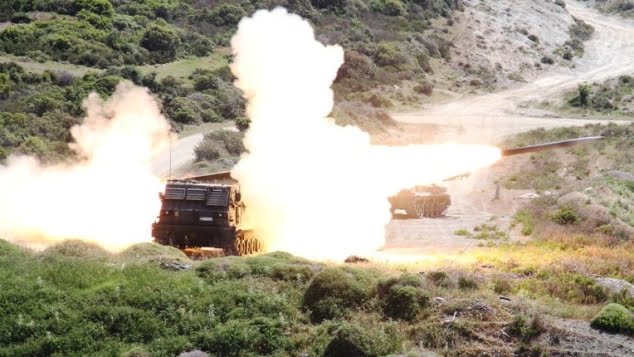 The era of major traditional expensive systems, whether these are surface ships, fighter jets or attack helicopters and tanks, is heading to its peak, because the cost has increased dramatically, Deputy Professor of Geopolitics, Konstantinos Grivas, at the Hellenic Military Academy, stressed. Furthermore, he stated, “even countries like the USA are changing course, trying to adopt more economical methods of projecting power that emphasize network-based structures and sophisticated missiles and robotic systems.”

“It is as if these methods and technologies were developed precisely to serve the needs of countries such as Greece and the Republic of Cyprus,” Mr. Grivas said in an interview with CNA, noting that “these systems can be largely developed with commercial materials,” but even if this cannot be done, “Greece and Cyprus have access to the technologies required for these systems.”

“Now the will to strengthen your defensive deterrent capabilities is a matter of decision,” he points out.

At the same time, Mr. Grivas, who also teaches Security Geography in the wider Middle East at the Department of Turkish and Contemporary Asian Studies of the University of Athens, stresses that the artillery can even be used as a substitute for tactical air force in areas of limited geographical space such as the Republic of Cyprus. Moreover, he also refers to the creation of a kind of “dam around the mainland, with which we could achieve actual naval dominance,” but also to the construction of low-cost unmanned submarines.

Mr. Grivas also refers to artillery systems that act as anti-ship weapons, with a combination of smart precision-guided missiles and self-direction capabilities, which function as a kind of tactical air force substitutes, while another important part of all, as he notes, is the combination of similar systems with low-teach means of protection, such as the infamous outdated infrastructure, that is, tunnel networks.

“Combining artillery systems with similar outdated infrastructure – which is very easy to build – in the territory of Cyprus could eliminate the advantage of enemy air force,” said Mr. Grivas, who also referred to the deployment of “suicidal” unmanned aerial vehicles, robotic systems, that is, a hybrid of drones and missiles, as he explains.

This military revolution, according to Mr. Grivas, “which is generally based on a kind of enhanced artillery that now includes robotic missiles, network-based structures and the broad use of such new technologies (robotic systems and artificial intelligence), but also of old, tried and tested ones (outdated infrastructures) can allow the substantial strengthening of the deterrent and defence capabilities of countries, such as the Republic of Cyprus, at a low cost, something which would facilitate the economy, as domestic companies, especially start-ups, aiming at high technology (case of Israel) may be involved.”

Also read: Smart Ammunition The “BONUS” of the artillery – An excellent choice for the Cyprus Theater of Business?

Mr. Grivas stated that all of this “could also strengthen the so-called defence diplomacy through direct cooperation with countries such as Israel and the United Arab Emirates, which are also important and looking for partners.” He notes that “an even better scenario would be a joint effort that includes cooperation between the Greek state and the Republic of Cyprus.”

More specifically, in his interview with CNA, Mr. Grivas said that “there is a global trend for the deployment of systems that replace traditional methods of projecting power and these emphasize the missile,” while “there has been an ongoing military revolution through a change of military power,” which concerns “the integration of many sub-factors, based on the conflict of the navy and ground forces, that takes place between countries such as China and the USA or Russia and the USA.” He noted that another factor promoting the revolution was “the introduction of robotics and artificial intelligence into military technology.”

A common denominator of all this, according to Mr. Grivas, is that “we are currently trying to develop systems of lower cost compared to the ones used in the past, since traditional platforms have become very expensive.”

“Thus, we witness fighter jets or warships or tanks becoming faster and faster so that very rich countries, such as Japan or South Korea, can purchase more limited numbers and move to another direction,” he said, adding that “a common aspect of these efforts is shifting the ‘center of gravity’ from the platform to the missile.”

“So there is a global trend for the deployment of systems that replace traditional methods of projecting power and these emphasize the missile,” he said, citing the deployment of “suicidal” unmanned aerial vehicles (UAVs), robotic systems, that is, a hybrid of drones and missiles.

Noting that these were widely deployed in Nagorno-Karabakh or Syria, Mr. Grivas said that even low-tech anti-government actors, such as ISIS, had previously achieved local air supremacy or sovereignty in Iraq, according to the words of the then director of the US Special Forces Joint Command, by using such commercially available drone systems. In other words, they had purchased them in their commercial form and converted them into airborne explosive devices.

He also said that similar choices are being made by other anti-government actors, such as the Houthis in Yemen.

In addition, Mr. Grivas told CNA that “we have a substantial increase in artillery capabilities that can be used even as a substitute for tactical air force in areas of limited geographical size, such as the Republic of Cyprus.”

In particular, he said that this is what Israel is doing, that is, it uses its artillery as a complement to its air force, this is what major countries like China, Russia and now the US are doing, because, as he explained, ” we have a very large increase in the strike range and precision, the destructive effects and the variety of effects that multiple artillery systems can have.”

“When we have multiple rocket launchers that engage targets with precision at 250-400 kilometers, while the US promotes systems that exceed 600 to 800 kilometers, you essentially do not need a fighter jet to do the job, which you do much more easily and “in a substantially cheaper way with the artillery,” he stressed.

He also said that there are possibilities called cross-domain fires, i.e. artillery systems or others, which can detect targets themselves – land or sea – with their built-in artificial intelligence algorithms.

He also mentioned that there are artillery systems that act as anti-ship weapons, while he noted that in the international market there are 155 mm artillery shells which have a barrel (engine) which allows them to achieve a horrendously long range of more than 100 km.

Another aspect, he continued, is the combination of similar systems with low-tech means of protection, such as the infamous outdated infrastructure, i.e. tunnel networks, such as the famous Hamas metro.

In particular, the Professor of the Hellenic Military Academy said that similar systems are used by Sweden and Switzerland, in addition to China, Iran and North Korea, which “is part of its strategy”.

“All of this is part of this so-called new military revolution that puts a lot of emphasis on reducing costs and replacing expensive platforms with much cheaper systems that are a combination of traditional weapons (artillery with improved missiles) with a new type of systems such as robotic technologies, autonomous robotic systems (unmanned aerial vehicles), armed systems or the hybrid of robotic aircraft and missiles, the so-called loitering ammunition,” he underlined.

Mr. Grivas said in his interview with CNA that, based on its current economic condition, it is difficult for the Republic of Cyprus to have large surface ships. “There are asymmetric methods of projecting power at sea, such as underwater systems, or conventional manned submarines, small in size and of relatively low cost (mini submarines with broad capabilities),” adding that “the development of these submarines is favored by new technologies such as lithium-ion batteries installed in submarines and which dramatically increase their mission duration.”

He said that Thailand planned to develop such a submarine, which would cost between $ 50 and $ 100 million, and noted that there were manned submarines with fewer capabilities at a cost of less than $ 10 million each.

However, the Professor said that there are very long-range torpedoes exceeding 150 kilometers and a submarine with such torpedoes, with artificial intelligence algorithms to distinguish targets on their own, among others, are very dangerous combinations.

At this point he cited the capture of a small submarine that the Colombian cartel had built with commercial materials and cost $ 1.5 million to carry 6 tons of cocaine, with a 12-hour autonomy. On this basis, he underlined that Greece and Cyprus, either on their own or with foreign technical assistance, can build much more advanced vessels at a cost of less than $ 10 million, equipped with new technology systems, such as new generation long-range torpedoes with high reconnaissance capabilities and more.”

“Also, they can build a kind of dam around the mainland, so as to achieve substantial naval dominance without being threatened by the enemy air force or being in great danger,” he said.

He added that “this can be combined with robotic systems such as UUB unmanned submarines. This is an important part of the so-called new military revolution, that is low-cost and can be built with commercial materials, to a large extent, both in Greece and in Cyprus” while “more advanced systems can be developed in cooperation with foreign companies.”

He also mentioned that there are surface or unmanned surface vessels and noted that “Turkey has developed armed unmanned speedboats, following the logic of the artillery we had in 1821.”

The Professor of the Hellenic Military Academy referred to the Iranian Revolutionary Guards Corps, which recently showcased the acquisition of 370 new speedboats, both manned and unmanned, but also the British-made fast speedboats with a speed of 90 knots or more. These, he said, were then copied and developed in large numbers, they “can launch an attack in a chaotic manner from many directions so as to eliminate the enemy defence and pose a kind of asymmetric threat to major naval powers such as the United States.”

He also said that Iran uses very small, low-tech, low-cost submarines with a small number of crew. These feature torpedoes and can launch cruise missiles.

“It is confirmed that such systems can be developed much more easily and be of much better quality in Greece and the Republic of Cyprus, either at a domestic level or in cooperation with foreign companies,” he stressed

Finally, Mr. Grivas described the purchase of Serbian self-propelled howitzers Nora B-52 by Cyprus as a right purchase, noting that the fact that they are currently evaluated by the US military with good prospects is positively indicative.

He also referred to Serbian, Polish, Belarusian, Chinese and Brazilian multi-launcher low-cost missile systems that can engage targets such as the S400, acting like the air force does in small spaces. He also made special reference to the Serbian guided missile ALAS that has even been purchased by the United Arab Emirates, a country that could easily afford more expensive equipment. This system “provides the pilot with the image obtained by the rocket itself and directs it to its terminal phase with high precision,” engaging, among others, armored vehicles, attack helicopters, self-propelled artillery, moving radars and surface ships.

Finally, when asked if Cyprus should be interested in the French Mirage aircraft that will be replaced by Greece, Mr. Grivas said that this “would be a very good idea”.

Also read: The contract for Mirage 2000 and Mirage 2000-5 fighters has been signed