Israel – Gaza | All the developments of the hostilities – Dead, wounded and escalation of tensions – MAP
Defence Redefined
Published on 13/05/2021 at 09:59 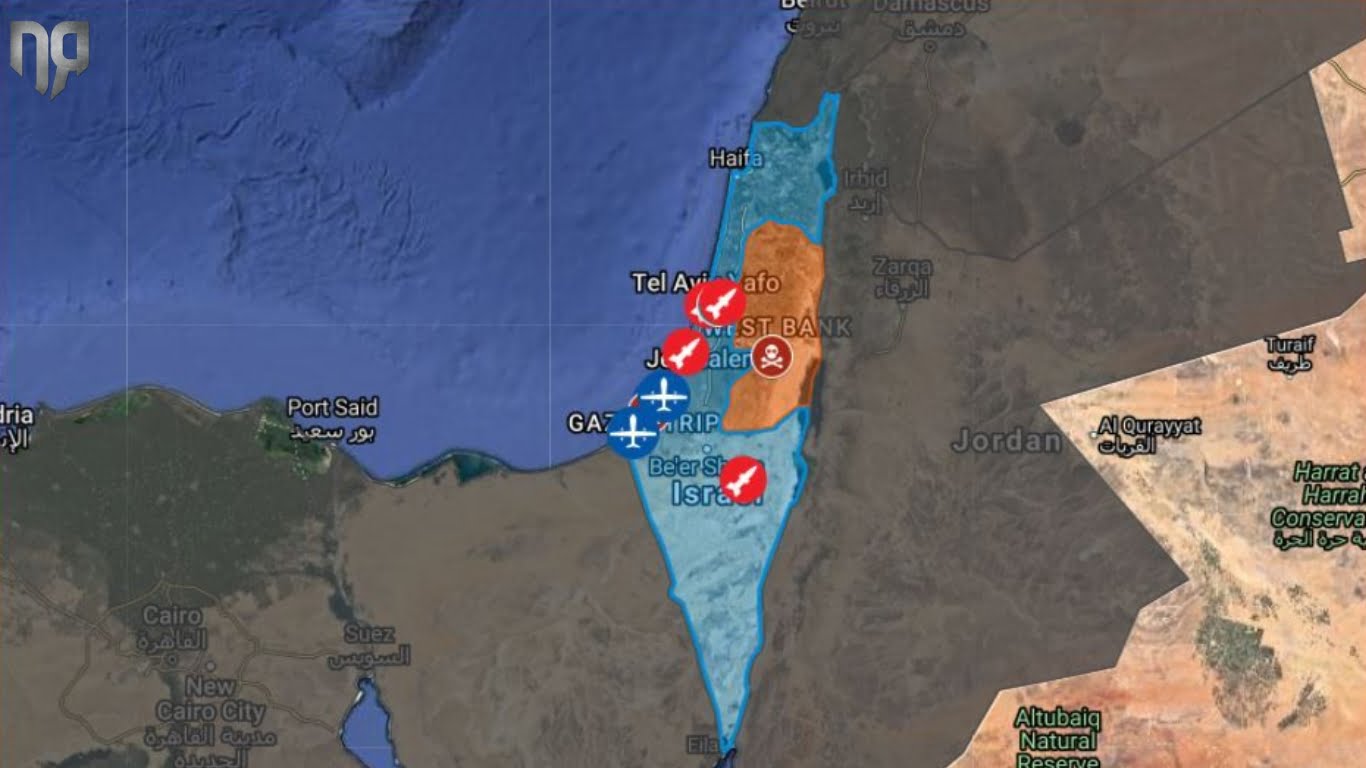 INTERACTIVE MAP – Navigate on the interactive map by clicking on the icons for more information and viewing videos. The Palestinian territories are shown in red and the territories of Israel in blue.

On Wednesday, Israeli Ministers approved plans to intensify military operations against targets in the Gaza Strip, and for the first time since the start of the ongoing military escalation with Hamas, the Israeli army has set an alarm over the northern part of the country.

Until now, the rockets fired from the Gaza Strip by Hamas have activated air defence sirens in southern and central Israel, but not in the north. But today sirens sounded again not only in the metropolis of Tel Aviv, where the inhabitants rushed to the shelters, but also in the valley of Israel, in Galilee (north). Since Monday night, about 1,500 rockets have been fired from the Palestinian coastal enclave against Israeli territory, according to the army’s latest report. (See map)

According to the Israeli army, 350 of the launches “failed”, while “hundreds” of rockets were intercepted by the Iron Dome air defence system.

Seven people have been killed in Israel, including a six-year-old child and a soldier, due to rocket and anti-tank missiles fired from the Gaza Strip. For its part, the Israeli army hits the Gaza Strip with fighter jets and attack helicopters, where it continues bombing since early today, according to a French Agency correspondent. (See map)

According to the latest report from the Ministry of Health in Gaza, 67 people have been killed and another 388 injured in the last few days in the densely-populated pocket of two million people. (See map)

Also read: Putin, Johnson and Erdogan call on Israelis and Palestinians to restrain themselves

According to an Israeli television channel, the army will target “symbols of Hamas power” in the coastal Palestinian enclave. It has already been announced that the Hamas Ministry of Finance will be bombed in the center of Gaza City to make it harder for the Islamist group to control the region. Israeli Prime Minister Benjamin Netanyahu has reportedly spoken against a ceasefire.

A Palestinian was killed during clashes with the Israeli army near Nablus, announced the Palestinian Ministry of Health, which raises the death toll to three in yesterday’s incidents in the occupied West Bank. The death toll comes amid military escalation between Israel and Hamas in and around the Gaza Strip, as well as violence in the West Bank, Jerusalem and Israeli cities with “mixed” Arab-Israeli populations. (See map)

In addition, Hussein al-Titi, a 26-year-old Palestinian, was killed in incidents with the Israeli army in the al-Fawar refugee camp near Hebron, the Palestinian Ministry of Health said. The Israeli military said the incident took place during an “operation” when “violent riots” broke out and soldiers saw “rioters” preparing to throw objects at their colleagues, thus “reacting and opening fire”.

“I thank the big brother country, Egypt, for opening all its hospitals in northern Sinai to receive wounded from the Gaza Strip,” Hamas leader Ismail Haniya posted on his Twitter account, thanking Egypt for opening the border of Rafah, the only crossing point between the Gaza Strip and Egypt, which receives wounded civilians from the Strip during the Muslim holiday of Eid al-Fitr following the completion of the Muslim Ramadan. “I thank the Egyptian Red Cross and the country as a whole, both as a people and as a government,” he added.

“The opening of the Rafah crossing from Egypt to wounded Palestinians from the Gaza Strip comes amid intense Israeli airstrikes against the Strip, which left more than 53 Palestinians dead, including 14 children, and more than 300 wounded,” ‘Al Ahram’ stated.

Three countries calling for extraordinary UAE-UN meeting, US assistance to Israel and Palestinians

Tunisia, Norway and China demanded Wednesday evening another Council meeting of the United Nations Security Council on the Israeli-Palestinian conflict to be held on Friday in public, said diplomatic sources.

This meeting, in which both Israel and the Palestinians will be invited to participate, will be the third that the UAE will hold since Monday. In the first two video conferences, which were held behind closed doors, the United States opposed the adoption of a joint statement by the top UN body calling for an end to hostilities, saying such a move would be “counterproductive” at this stage, according to diplomats.

Meanwhile, US President Joe Biden was optimistic that violence between Israelis and Palestinians would end soon, following a telephone conversation with Israeli Prime Minister Benjamin Netanyahu.

“My expectation and hope is that this will end sooner rather than later, but Israel has a right to self-defence,” Biden told reporters at the White House today.

According to an announcement by the White House, the US President condemned the firing of hundreds of rockets by Palestinian armed groups from the Gaza Strip against the territory of Israel during his telephone conversation with the Israeli Prime Minister on Wednesday. Biden “condemned the rocket attacks by Hamas and other terrorist organizations” against “Jerusalem and Tel Aviv,” among other things, according to the statement.

Also read:  Contact telephones for Cypriots in Israel and Palestinian Territories made public by the Ministry of Foreign Affairs

He conveyed his “unwavering support for Israel’s security and Israel’s legitimate right to defend itself and its people, with the protection of civilians.”

The US presidency also said that the head of state urged his interlocutor to look for a “way to restore lasting calm” and briefed him on his government’s contacts with regional governments and Palestinian officials.

On the other hand, Mr. Netanyahu’s services issued a press release stating that the Israeli Prime Minister stressed to the American President that his country’s armed forces will “continue to hit” Hamas positions and other “terrorist organizations operating in Gaza Strip.”

Meanwhile, US Secretary of State Anthony Blinken announced Wednesday night (early morning Cyprus time) that he had spoken with Palestinian Authority President Mahmoud Abbas on the telephone and called for an end to Israeli rocket fire.

“I spoke with President Mahmoud Ahmadinejad about the situation in Jerusalem, the West Bank and Gaza. I expressed my condolences for all the casualties. I emphasized the need to end the attacks and to escalate tensions,” the US diplomat posted on Twitter.