Iranian cargo ship Saviz attacked by Israel with the use of limpet mines – VIDEO
Defence Redefined
Published on 07/04/2021 at 09:02 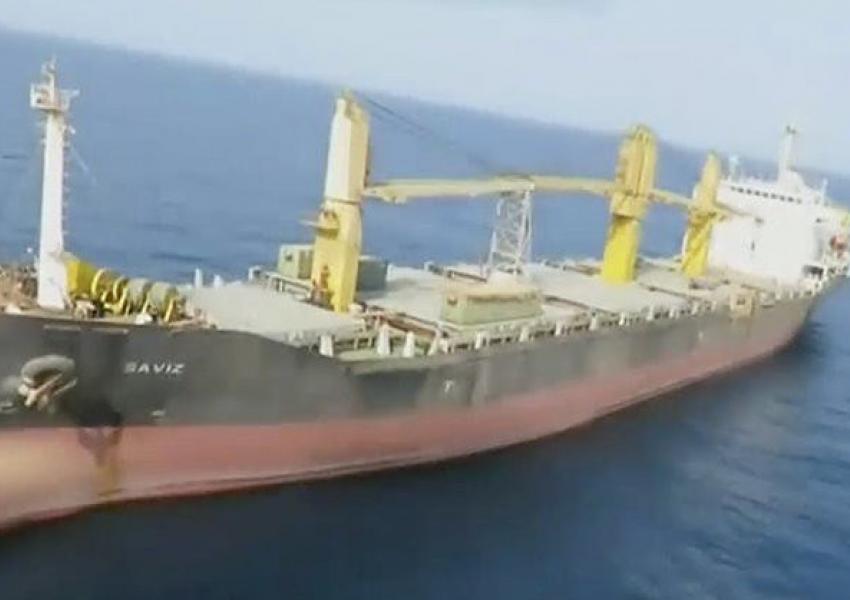 The Iranian cargo ship Saviz was attacked with the use of limpet mines in the Red Sea, the state-run Tasnim news agency reported, citing information gathered by a journalist.

“The Iranian cargo ship Saviz has been stationed in the Red Sea for the past few years to support Iranian commandos sent on cargo ship escort missions (against pirate attacks),” Tasnim reported. There has been no immediate Iranian response to the incident.

US officials told Reuters – on condition of anonymity – that the United States had not launched an attack on the Iranian ship.

Al Arabiya television was the first to broadcast the news of the attack on the Iranian ship, citing sources who said that the ship was attacked off the Eritrea coast and that the ship was affiliated with Iran’s Revolutionary Guards, but did not provide evidence to support the claim.

However, Washington was informed by Tel Aviv that Israel had attacked the Iranian ship “The Saviz” in the Red Sea, as it became known on Tuesday (06/04), according to a relevant article in the “New York Times” citing a US official.

In particular, according to this report, the Israelis described the attack as “retaliation for previous Iranian attacks on Israeli ships.”

The official also noted that “Saviz” had been damaged and added that the attack may have been delayed because the American ship “Dwight Eisenhower” was near.

However, at the time of the attack the US ship was “about 200 miles away”, according to the official. So far, both Iran and Israel have not made any official comments on the incident.

Late last month, an Iranian missile reportedly struck an Israeli ship between India and Oman. In February, Iran allegedly attacked the Israeli cargo ship MV Helios Ray, which was damaged in an explosion in the Gulf of Oman. In addition, in March, dozens of Iranian ships were attacked by Israel across the Middle East. The Wall Street Journal also reported that dozens of Iranian oil tankers heading to Syria had been attacked by Israel.

In addition, on Tuesday, TankerTrackers.com, an online service that monitors and reports crude oil storage shipments, reported that four Iranian oil tankers were crossing the Suez Canal heading to Syria, carrying a total of 3.5 million barrels of oil and thus they breach the trade embargo on the two countries.

The United States has denied any involvement in Tuesday’s incident, US officials told Reuters. Asked by the Jerusalem Post, the Israeli Defense Forces (IDF) said they did not respond to foreign reports.

Earlier on Tuesday, Prime Minister Benjamin Netanyahu warned that Israel would defend its interests from Iranian threats as part of negotiations between Iran and world powers.

“We cannot support the dangerous nuclear plan, because a nuclear Iran is an existential threat and a very big threat to the security of the whole world,” Netanyahu said. “We must act against the fanatical regime in Iran that is threatening to wipe us out of the earth. We will always know how to defend ourselves from those who seek to kill us.”