ARMAMENTS
INTRACOM DEFENSE (IDE) | Presentation of Innovative Products with an interest for the National Guard of Cyprus at EUROSATORY 2022
Defence Redefined
Published on 21/07/2022 at 17:01 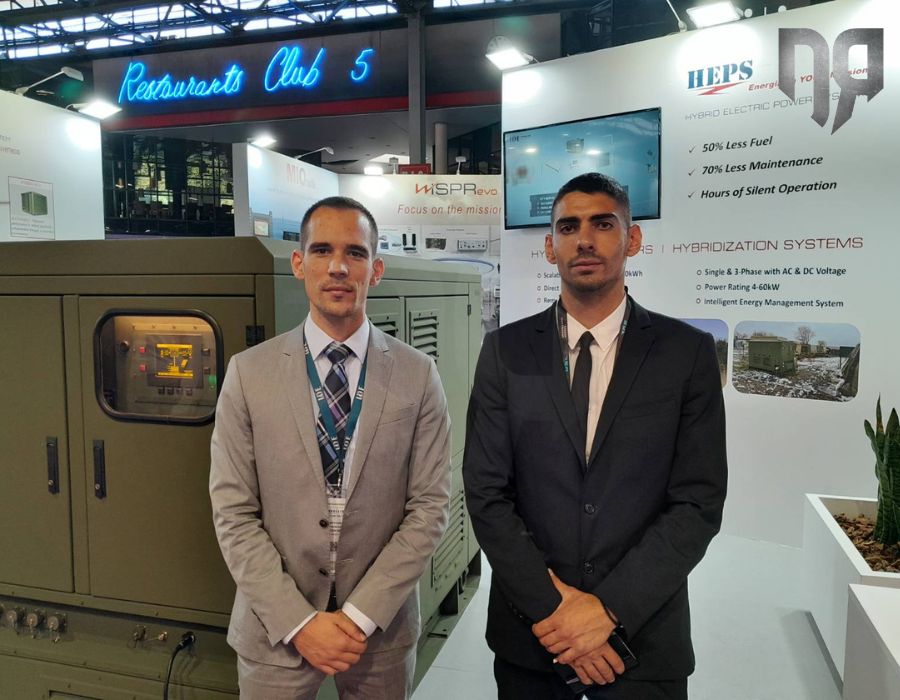 During the International Defence and Security exhibition Eurosatory 2022, Intracom Defense (IDE) showcased, among others, its hybrid power supply solutions, which provide operational but mainly tactical advantages.

Mr. Efthymis Papavassiliou, IDE Sales & Business Development Manager – Hybrid Systems, gave an exclusive interview to DEFENCE ReDEFiNED through which he made an extensive presentation of these solutions that might be of interest to the National Guard of Cyprus. 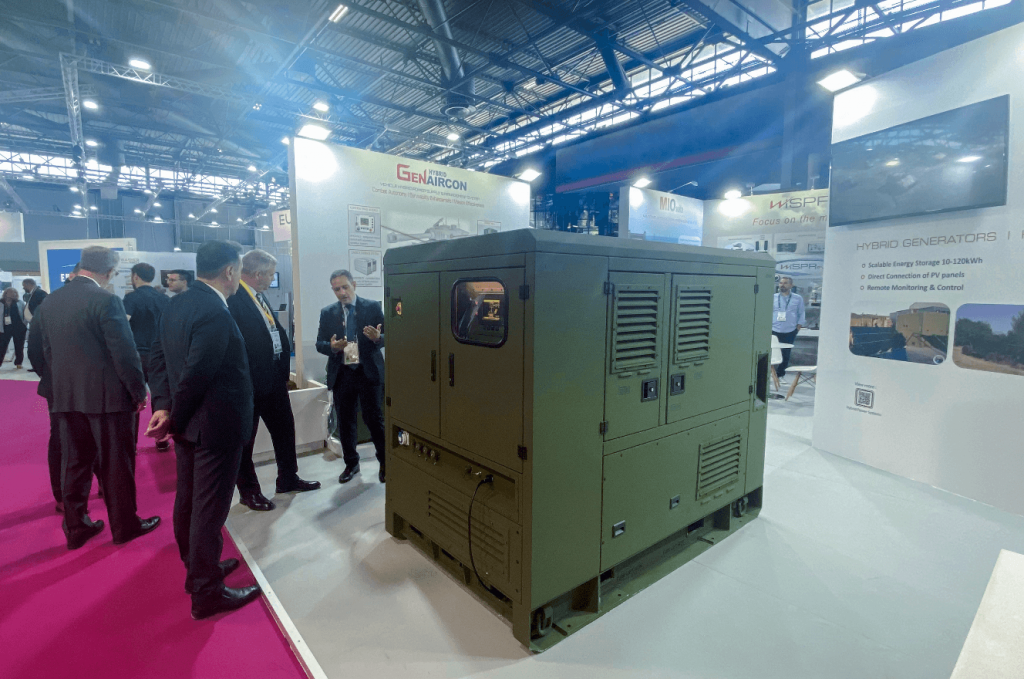 IDE’s main exhibit at the Paris exhibition was the latest version of HEPS® HGT20K, a system that was also used during NATO’s STEADFAST LEDA 2021 Exercise last November in Poland. It is worth mentioning that the generator presented by IDE at Eurosatory was silently supplying IDE’s entire booth with energy, making the company the sole exhibitor with off-grid capability at the exhibition.

The need for hybrid power solutions on the modern battlefield is becoming imperative as the energy requirements of each military formation are constantly augmented due to the all the more extensive use of advanced communication, reconnaissance, observation, targeting as well as other mission support systems.

Under the constant monitoring of an intelligent power management system, IDE’s hybrid generators (single-phase or three-phase) combine, in an integrated system, high-efficiency generators, an advanced energy storage system, renewable energy sources (PV elements) and other sources of electricity, accessible in the field. Thus, they ensure reliable and uninterrupted power supply on the field of operations, contributing to the reduction of risks and freeing up critical resources of Logistics Support units.

Hybrid systems, unlike conventional generators, enhance field survivability via the ability to manage their acoustic and thermal signatures, providing a  significant tactical operational advantage. They also achieve great savings in fuel, spare parts and maintenance work. In addition, they provide the capability of scalable expansion and modular upgrading of their features to meet future needs and create flexible micro-networks, thus satisfying the seamless support of the evolving needs of each military formation. 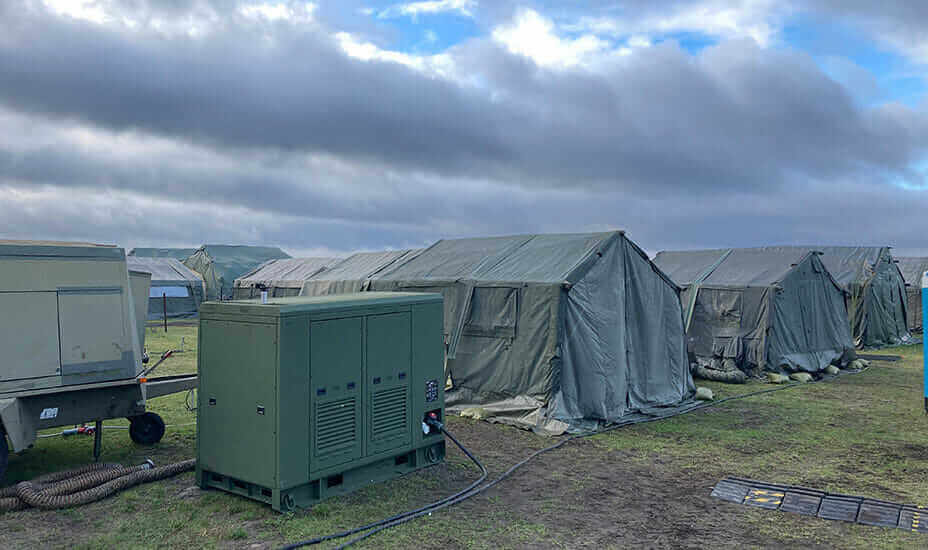 The use of hybrid energy systems can lead to a reduction of more than 50% in fuel consumption and 70% in maintenance, since the intelligent Power Management System ensures the optimal use of the generator, through the combined operation with the advanced Energy Storage System.

Typically, HEPS® hybrid solutions satisfy the power requirements between 4-60 kW with an energy storage capability of up to 120 kWh. Indicatively, a HEPS® HGT20K type generator can meet the needs of a Brigade-level command post, achieving true silent operation at 45% of the total operating time and 60% fuel consumption savings compared to existing conventional solutions.

It is worth noting that the solutions’ range offered by IDE extends, beyond the above, to customised hybrid power supply solutions, which have already been installed in critical applications of Armed Forces of the Western world. 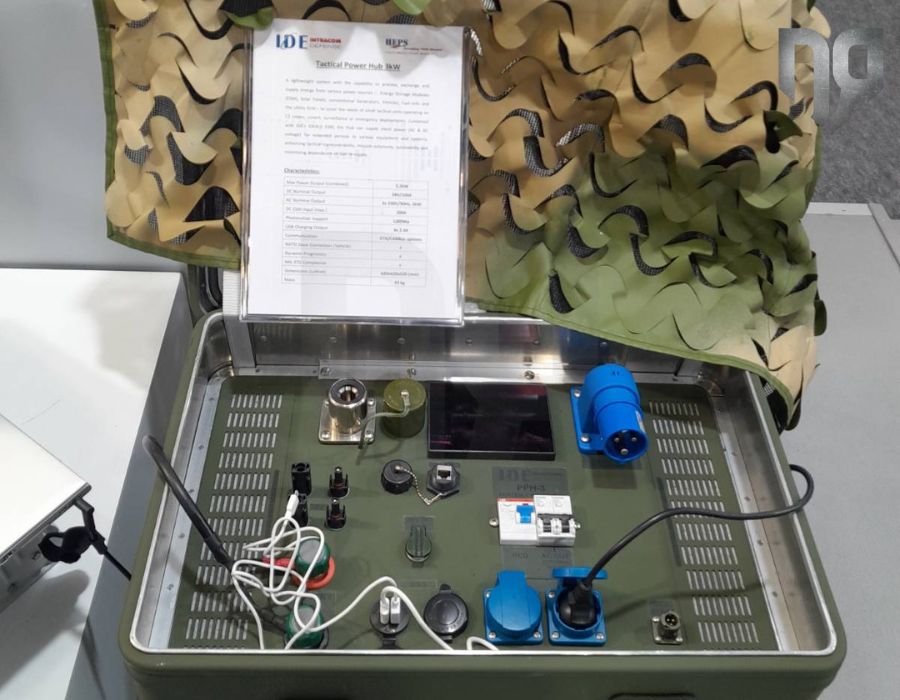 In combination with an Energy Storage Module (ESM), the portable version (Tactical Power Hub) offers Special Forces units and infantry platoons, an acoustically “silent” & thermally “invisible” source of electrical power as well as the energy flexibility and extended autonomy for all their modern equipment. At the same time, the system can manage and store energy from a multitude of alternative sources, such as the electrical grid, conventional generators, vehicles, photovoltaics and fuel cells.

Furthermore, it is important to note that the trend for future energy autonomy in combat units focuses on solutions with microgrid capabilities, where any power source will be able to be interconnected feeding the total power needs of the local network during operations. 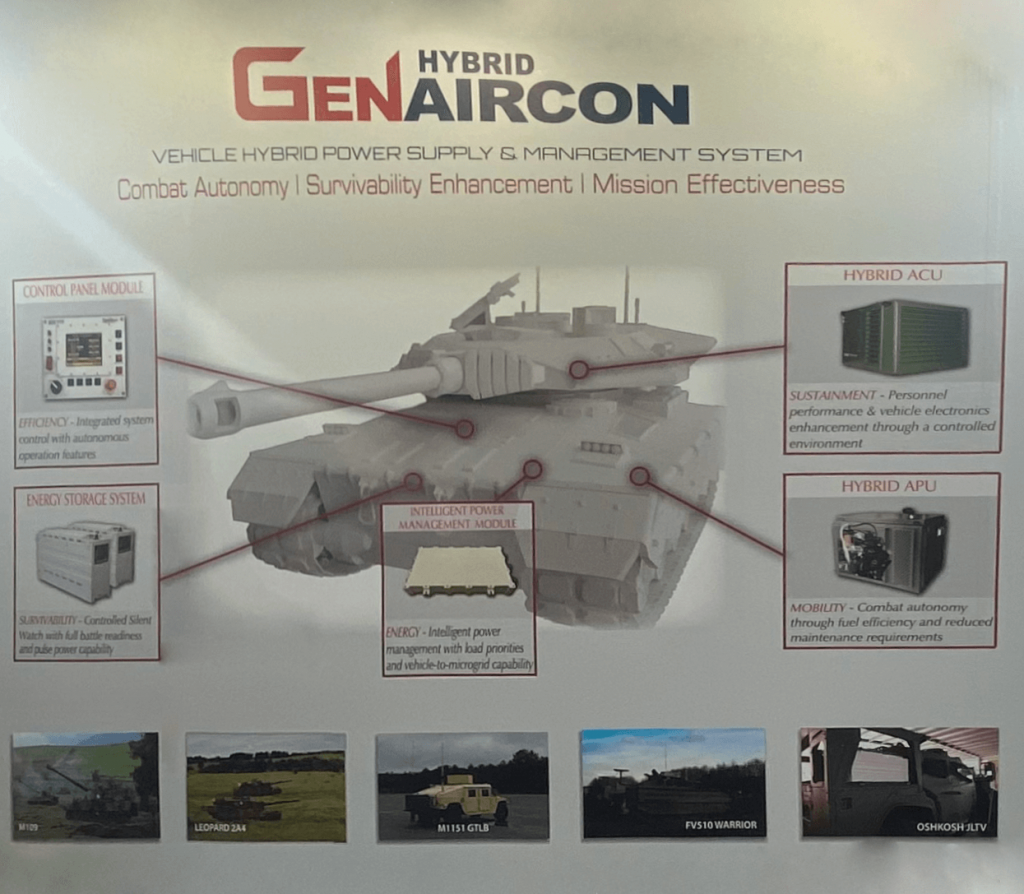 The vehicle’s electronic systems can be powered by the integrated energy storage system, maintaining sound and thermal concealment, thus achieving a unique tactical advantage. Taking also into account the requirements of the modern battlefield, GENAIRCON turns the vehicle into a mobile electrical power hub, allowing the on-field power supply for a multitude of systems, such as unmanned aerial vehicles, without requiring its engine to operate.

It is worth mentioning that during the DEFEA international exhibition last summer (July 2021) in Athens, IDE presented a LEOPARD 2 A4 Main Battle Tank of the Hellenic Army featuring the GENAIRCON system. In response to our question, it was stated that the system could also be installed on the T-80U tanks, as well as on other critical platforms of the National Guard, thus enhancing their survivability, reducing their cost of use and leveraging future upgradability. 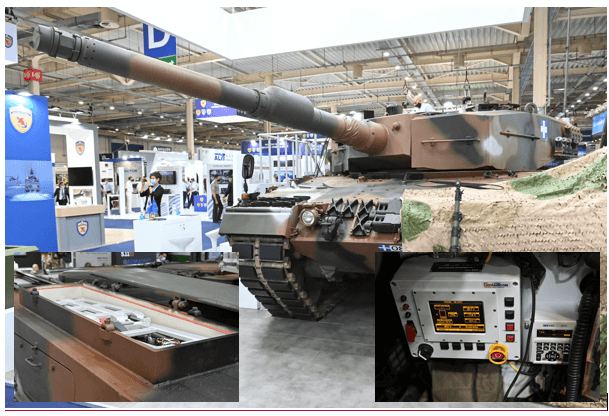 Specifically, the T-80U tank could potentially be fitted with the system’s advanced Energy Storage System and intelligent Power Management System, for increased autonomy in the use of its targeting and communication systems without the need to run its auxiliary GTA-18 type (18 KW) power unit (APU). 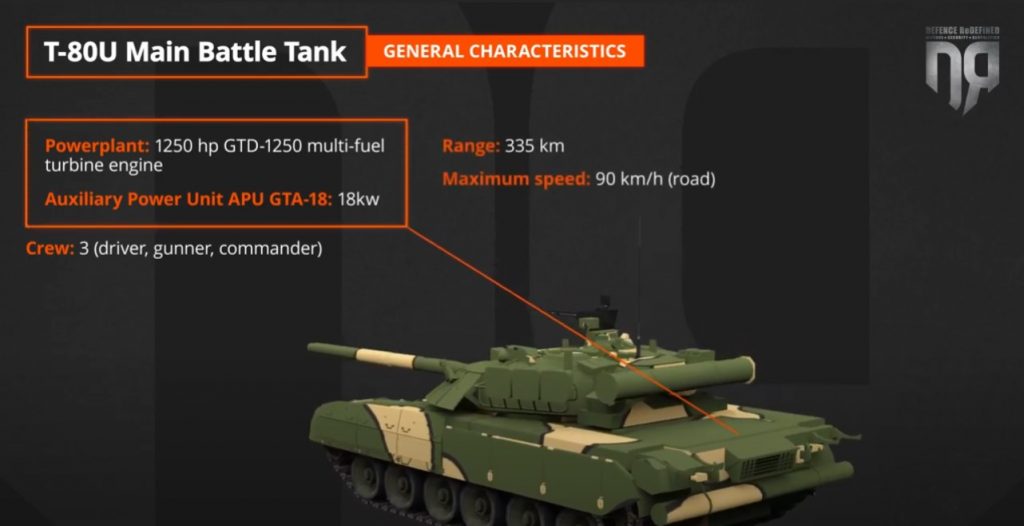 Using GENAIRCON, the tank or self-propelled howitzer will be able to use its electronic and electrically moving parts, such as the turret, completely silently, without operating the conventional APU continuously, something which would negatively affect not only the thermal footprint and fuel economy, but also the wear and tear of the APU itself.

A typical example of a combat vehicle on which the GENAIRCON system has been recently installed is OSHKOSH DEFENSE’s JLTV – a highly successful platform, which is in (or will enter) service not only with the US Army, but also in Lithuania, Montenegro, Slovenia and Belgium. 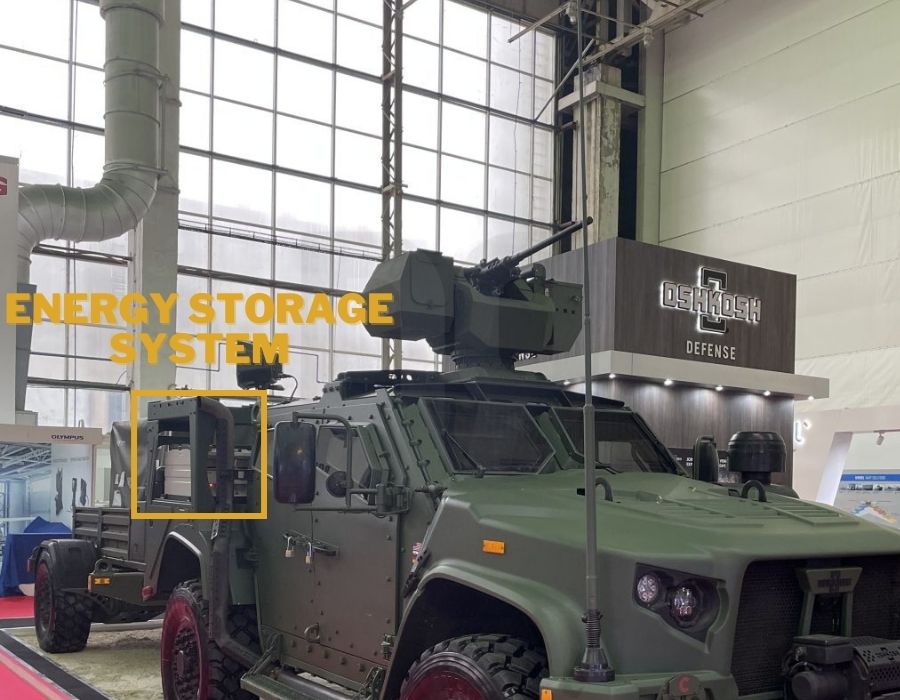 In addition to its solutions in the energy sector, at Eurosatory, IDE also presented the integrated tactical communications and information management system WiSPRevo. WiSPRevo is designed according to the latest military and technology standards as a modular communications and information management system for combat vehicles, and provides flexible configurations to support multiple capabilities and services depending on the missions’ operational requirements. Thus, it is an ideal solution both for the modernization and upgrading of existing systems as well as for the provision of an integrated communications platform in new types of vehicles, with the aim of digitising the battlefield and conducting network-centric operations.

Furthermore, WiSPRevo, through Dynamic Noise Reduction (DNR), provides exceptional high-quality communications both among crew members and over external radio networks. In this way, critical operational parameters that contribute decisively to mission accomplishment are ensured, as crew fatigue is significantly reduced and their performance in terms of tactical situational awareness, decision-making and coordination of actions is enhanced.

It is worth noting that a memorandum of cooperation was recently signed between INTRACOM DEFENSE and Rheinmetall Defence in the field of vehicle-based C4I systems for military vehicles, with the aim of synergizing their complementary technological, manufacturing and commercial capabilities, for the joint development and distribution of such systems to the international markets. More specifically, this collaboration anticipates the combination of Rheinmetall’s TacNet tactical Command and Control system and its expertise in Modern Soldier Systems and C4ISTAR applications, with IDE’s WiSPRevo Communication and Information System and the Greek company’s long-standing experience in the field of vehicle communications.