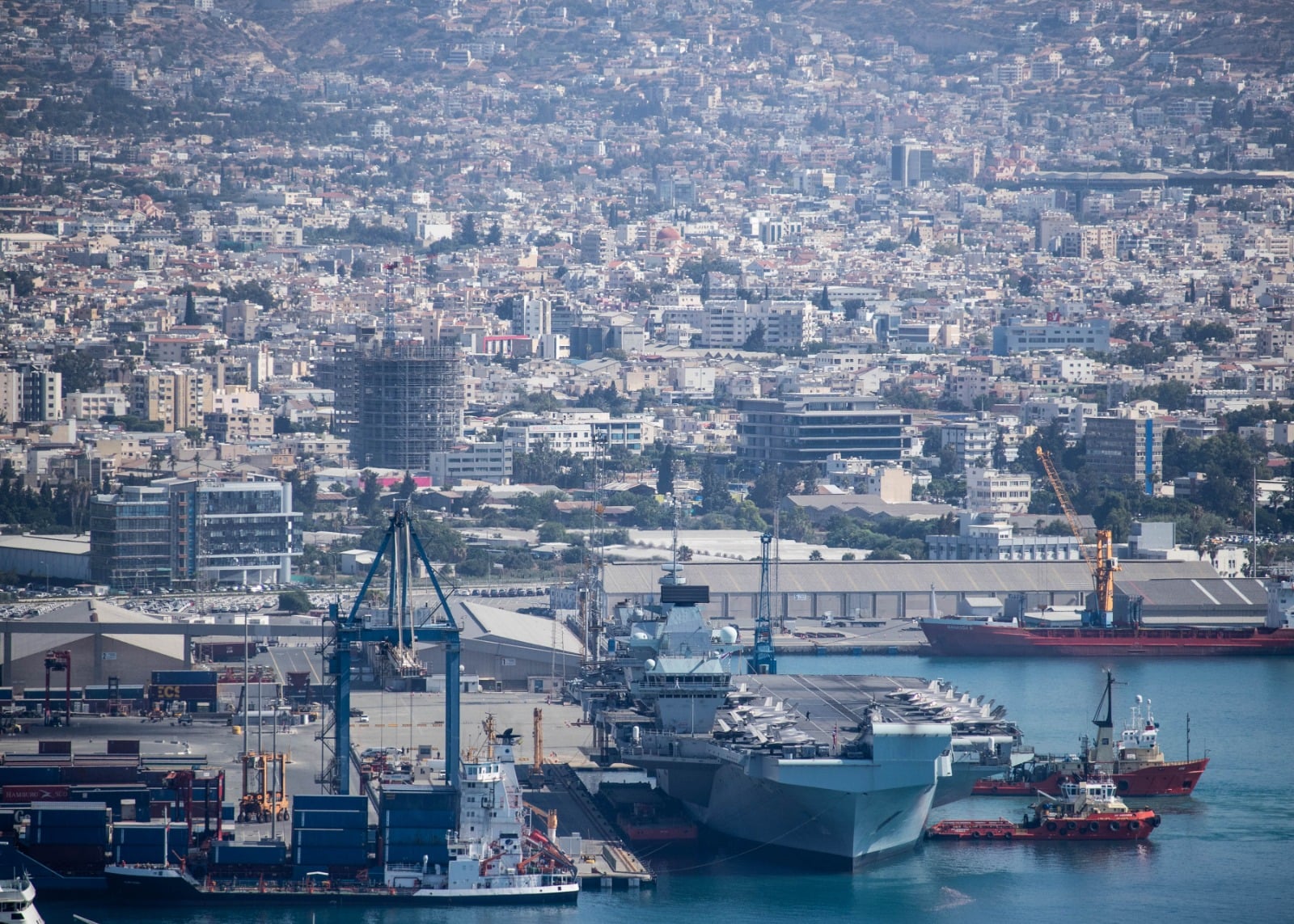 The relations between Cyprus and Great Britain are becoming deeper and wider and the presence of the Royal Navy flagship on the island sends a strong message in this direction, said today the British High Commissioner Stephen Lilly. 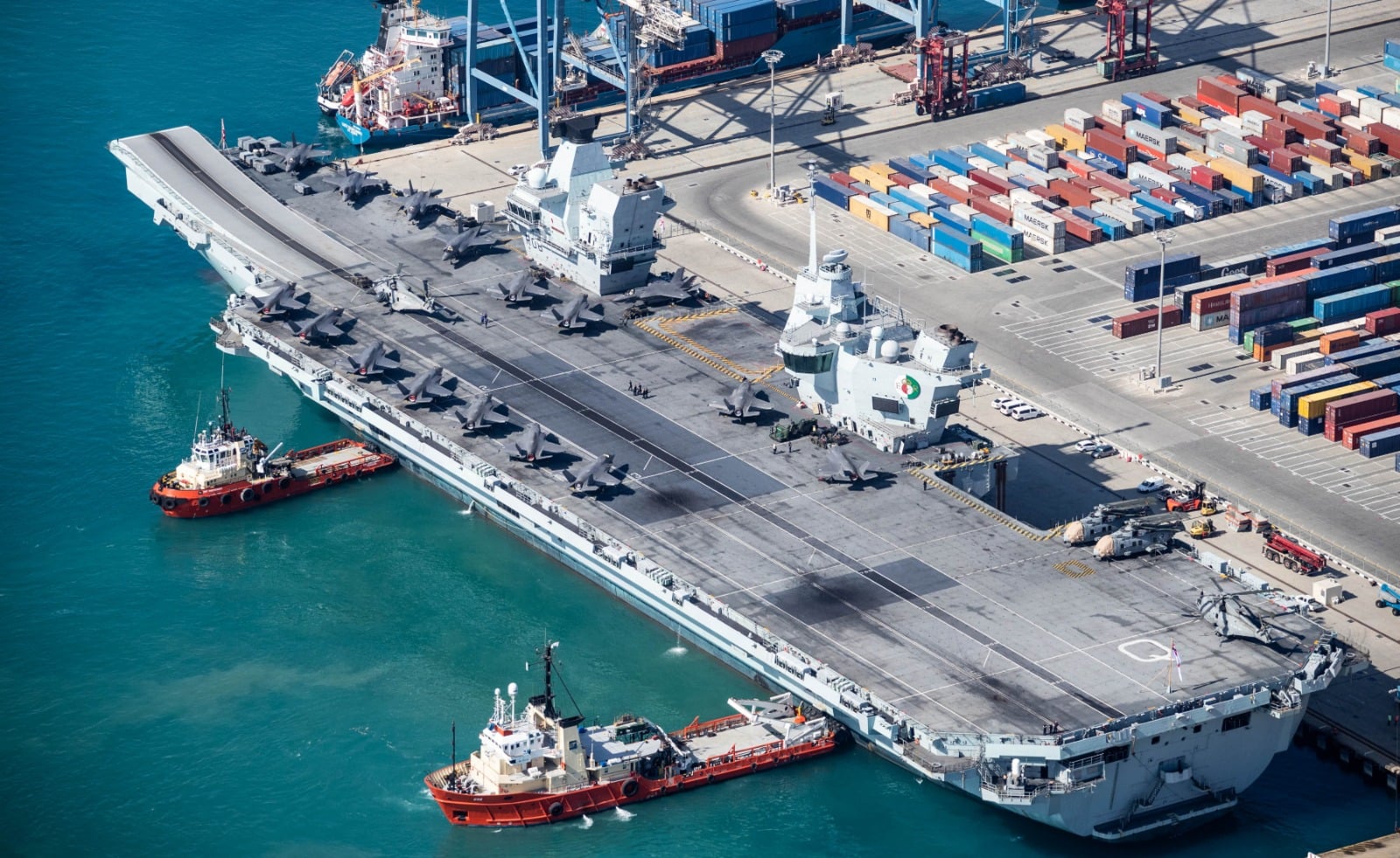 This morning Mr. Lilly visited the largest warship of the Royal Navy, the aircraft carrier HMS Queen Elizabeth, which has been docked at the Limassol port since yesterday, carrying 1600 personnel, 18 state-of-the-art F35B aircraft and 10 Merlin and Wildcat helicopters.

Expressing his satisfaction with the visit of the Royal Navy flagship to Cyprus, the High Commissioner stated that this is a state-of-the-art aircraft carrier (in service since 2014) with enormous potential.

It is, he noted, a tangible proof of the British commitment to be an active country on the world stage, while he stressed that the presence of the ship on the island sends a strong message that Britain seeks to strengthen its relations with Cyprus, which are increasingly becoming deeper and wider, as he put it. 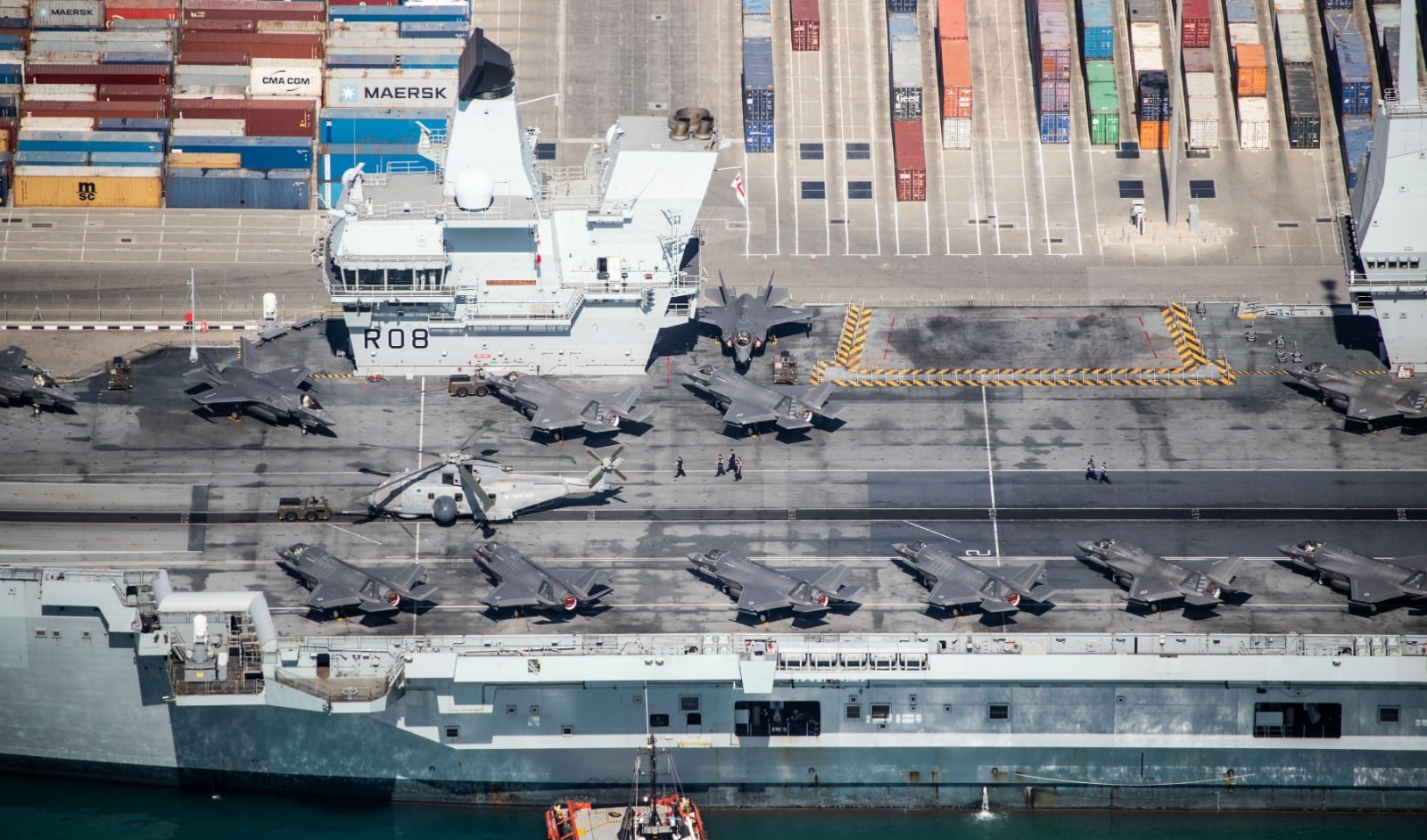 Mr. Lilly also expressed his contentment after the Minister of Defence Charalambos Petridis and the Chief of the National Guard, Lieutenant General Democritus Zervakis visited the aircraft carrier yesterday, while he stated that the President of the Republic, Nikos Anastasios, is expected to visit HMS Queen Elizabeth on Saturday.

“We look forward to briefing him of the ship’s capabilities and strength and explaining the contribution of the UK Carrier Strike Group 21, not only to the security of the UK but also to the EU as a whole and to a peaceful and a secure Eastern Mediterranean,” he added.

This, he pointed out, is a common interest of both Great Britain and Cyprus. 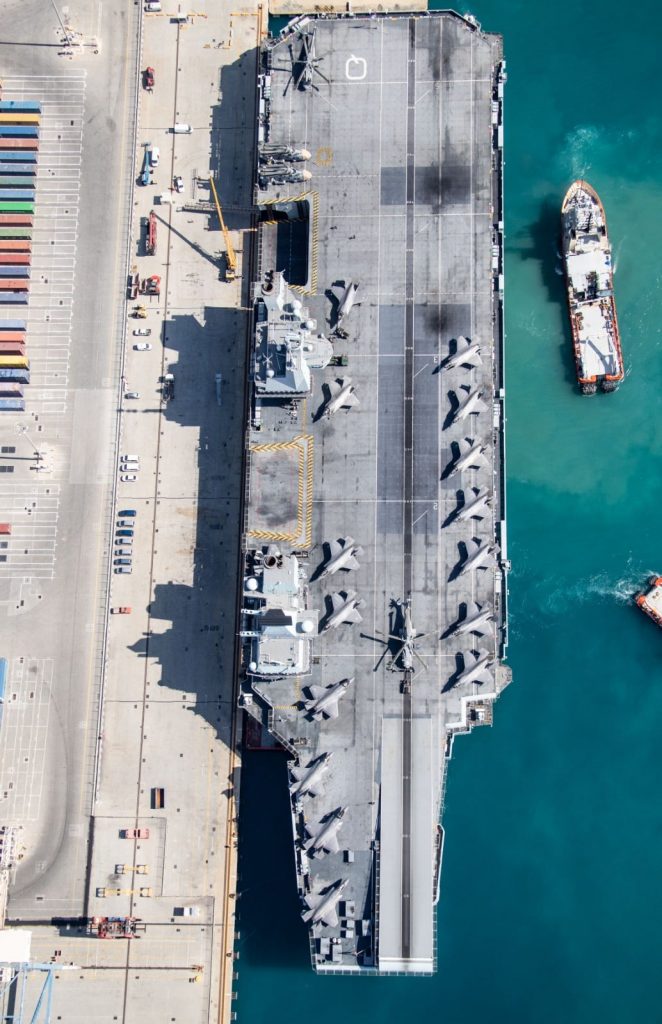 The presence of HMS Queen Elizabeth at the Limassol port underlines three things, said for his part the military Commander of the British Bases, General Rob Thomson, who also visited the aircraft carrier.

Firstly, he said, it underlines the British commitment to ensuring the security and stability of the Eastern Mediterranean; secondly, it stresses the importance of friendship and cooperation with the Republic of Cyprus “which is very important to us for many reasons” and thirdly, it foregrounds the role and work that the British Bases have to perform through the assistance they are called to provide during the presence of the aircraft carrier on the island.

Asked to refer to joint exercises to be carried out by aircraft carrier personnel, the British Bases and the Republic of Cyprus, General Thomson said there was close co-operation and that various actions and activities had been arranged that would be mutually beneficial.

This is the first visit of HMS Queen Elizabeth to Cyprus and the crew is excited to rest for a few days and get to know the island and its beauties up close, said the captain of the aircraft carrier, Captain Angus Essenhigh. 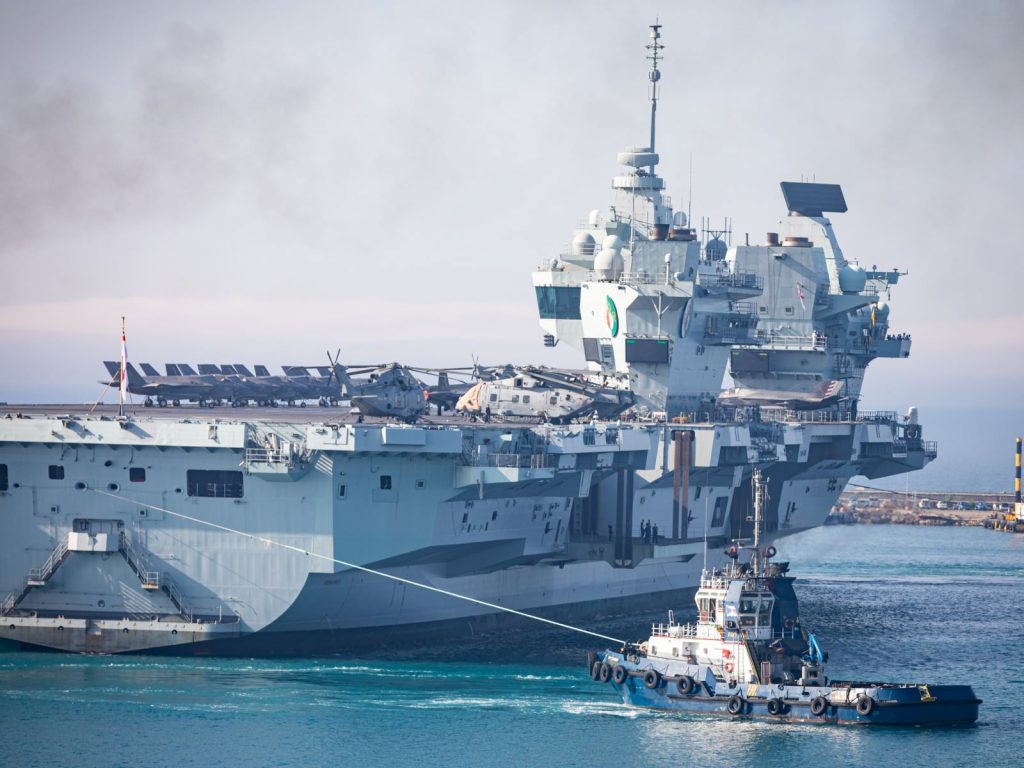 Our priority, he continued, is to supply the ship with fresh fruits, vegetables and Cypriot food, while he indicated that HMS Queen Elizabeth will sail next Monday, heading to the Suez Canal and the Indian Ocean, reaching as far as Japan.

Asked about this, the captain said that in recent weeks, the fleet of nine aircraft led by the aircraft carrier, participated in missions in northern Iraq, as part of Operation Shader against the Islamic State.

The aircraft carrier is escorted in Cyprus by a Dutch frigate (HNLMS Evertsen) and an American destroyer (USS The Sullivans), while out of the 18 state-of-the-art F35B fighter jets it carries, 10 belong to an American Marines squadron. 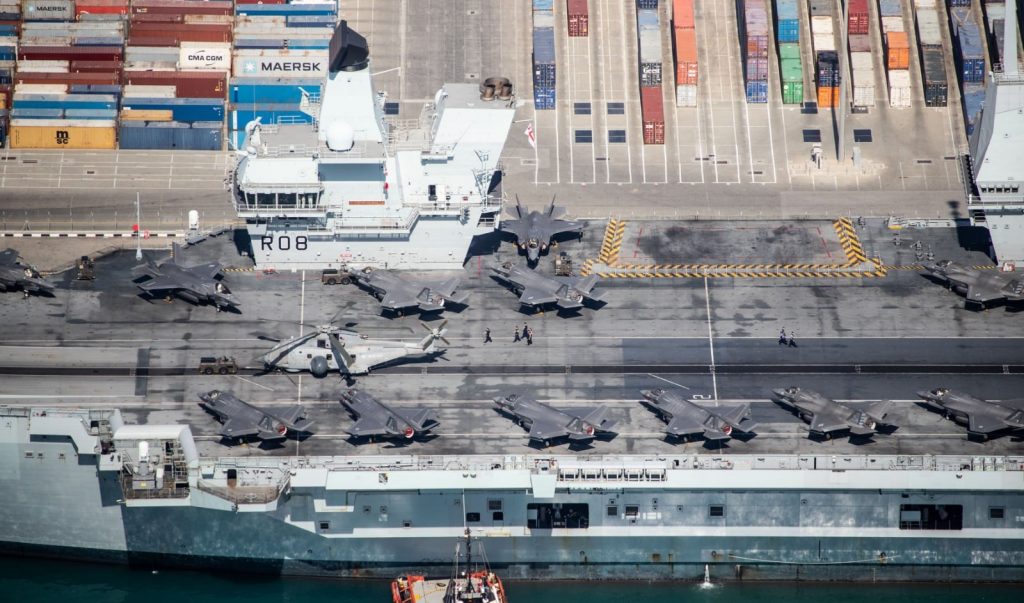