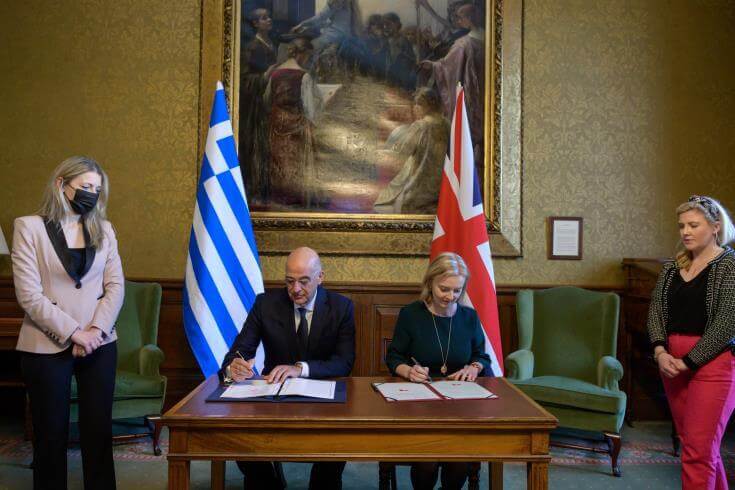 On Monday, Greece signed a symbolic and substantial agreement with the United Kingdom which provides for the two countries’ ongoing close collaboration in a wide range of areas after BREXIT.

The Memorandum of Understanding on the Strategic Bilateral Framework covers areas such as foreign policy and defence, trade and investment, education relations, and a general commitment to further develop the cooperation between the two countries.

For Greece, as Mr. Dendias himself commented, signing this agreement proves that the exit of the United Kingdom from the EU does not in any way impact its relations with Greece, while he added that its goal is clear: it seeks peace, stability, and prosperity.

On behalf of Great Britain, the signing of the agreement constitutes proof that Britain continues to be in the global political scene in the post-BREXIT era and strengthens its relations with its old partners.

The said agreement comes in 2021, a milestone year with the 200th anniversary of Greek Independence and the 200-year consistent alliance between the two countries. Further, the agreement comes a few weeks before the scheduled visit of Prime Minister, Kyriakos Mitsotakis, in mid-November.

The issue of Turkey in Dendia’s visit

The Greek Foreign Minister also attended the event “Enhancing Security and Stability in Europe and the Mediterranean” organized by the Royal United Services Institute (RUSI).

There, according to Deutsche Welle, the Minister described Turkey as a “regional troublemaker” attempting to revive the “neo-Ottoman ghost” and threatening Greece with war, if it exercised its sovereign rights, explaining the content of casus belli to the audience and stressing that Greece has chosen a different path instead.

Mr. Dendias also referred to the various agreements with Italy, Egypt, France, the UAE, Saudi Arabia, and the United States.

According to CNA, he noted that the country’s policy revolves around five mutually reinforcing concentric circles, with the first covering Europe, the second the Middle East and North Africa, the third the Western Balkans, the fourth the USA and NATO and the wider world, with challenges such as climate change, immigration, cyberspace, and free navigation.