NEWS
Greece | The contracts for the acquisition of Belharra frigates and Rafale fighters have been signed
Defence Redefined
Published on 25/03/2022 at 09:55

“The signing of contracts for the acquisition of Belharra frigates and Rafale fighter jets is a milestone in our bilateral defence cooperation and, more broadly, in Greece-France relations.”

This was emphasized by the Minister of National Defence, Nikos Panagiotopoulos, in a special ceremony that took place today on the ‘Cruiser George Averoff’ in Paleo Faliro.

According to Euronews, referring to the ceremony held on the said Cruiser, the Minister of National Defence stressed that it is an emblematic warship in the history of our country, with a key role in ensuring national independence and sovereignty as well as in defending our national rights,” while he went on to say that, “the fact that the signing ceremony takes place on ‘Cruiser George Averoff’ is highly symbolic.” 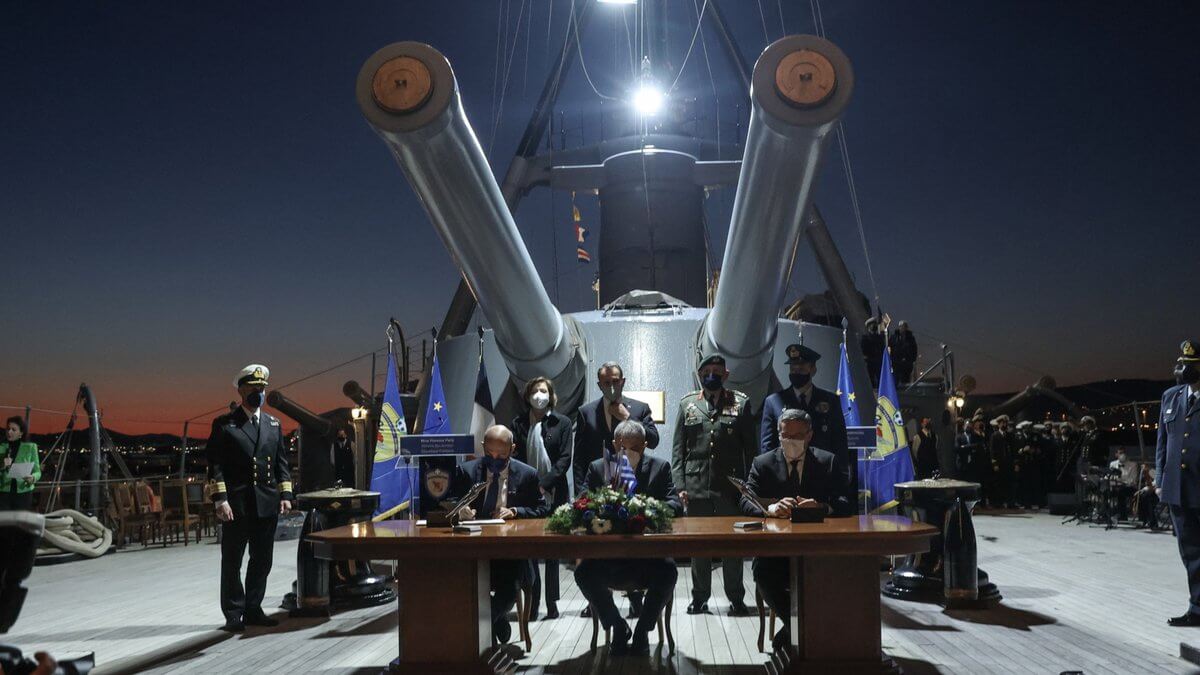 Panagiotopoulos clarified that the acquisition of the Belharra frigates and the 6 additional Rafale fighters “will contribute to the further strengthening of the combat capability and the deterrent power of the Hellenic Navy and Air Force and, in general, of the Hellenic Armed Forces, which constitute the defence of the territorial integrity and sovereign rights of our homeland.”

He said he was proud, as “never before have negotiations for such a complex and large armaments program been completed so quickly and methodically.”

“With the acquisition of new frigates and new fighter jets,” he said, “the firepower of the Hellenic Navy and the Hellenic Air Force will be multiplied. The special features of the Rafale and Belharra, with their advanced electronic systems (radar sensors, electronic warfare systems, etc.) in combination with their strategic weapons, make these specific armament programs an important factor of air and naval superiority.

Regarding the agreement, he stated that “it is, as stressed by the Prime Minister Mr. Kyriakos Mitsotakis, a model for a strong and autonomous European Union of tomorrow. It’s time,” he added, “that the EU’s economic strength commensurated with its defence capabilities, so that from a passive observer it can turn into an active protagonist of geopolitical developments.”

Regarding the Greek-French relations, he stressed that “they aim to shield the defence of the two countries against revisionist actions, such as Russia’s actions against Ukraine, sovereignty, and independence and to safeguard human life and prosperity in view of threats that refer to dark periods of history.”

He went on to say that the Greek-French relations “are based on solidarity and the strong, timeless and sincere friendship of our countries and peoples, since the time of the Greek Revolution in 1821, and the contribution of the French philhellenes and France, as a Great Power in the national struggle for freedom. It is,” he said, “a special honor and joy and of particular importance that the French Minister of Defence, Ms. Florence Parley, will take part in tomorrow’s glorious celebration of the National Anniversary.”

“It is the common will and decision of our governments to contribute to security, stability, and prosperity in the wider Aegean and Eastern Mediterranean region, based on respect for the rules of international law, international law of the sea, and the principles of good neighborliness,” stressed Mr. Panagiotopoulos in his speech.

On her part, the French Minister of Defence, Florence Parley, stressed that Greece, by acquiring the frigates, completes and strengthens its operational capabilities. “It will have,” she said, “ships with state-of-the-art combat systems capable of protecting its national interests.”

The contract for the acquisition of frigates and aircraft was signed by the Greek side by the Director-General of Defence Equipment and Investments of the Ministry of National Defence, Vice Admiral (ret.) Aristidis Alexopoulos. From the French side, the agreement was signed by the President and CEO of Naval, Pierre-Eric Pomele, and the CEO of MBDA, Eric Beranze, while the CEO of Dassault Aviation, Eric Trapier, and the Managing Director of MBDA, Erik Beranger, signed the contract for the aircraft.

After the end of the ceremony, N. Panagiotopoulos and Fl. Parley visited the French aircraft carrier ‘Charles de Gaulle’.