French Ambassador | The EU should have a greater presence in the Eastern Mediterranean – VIDEO
Defence Redefined
Published on 24/08/2020 at 10:20 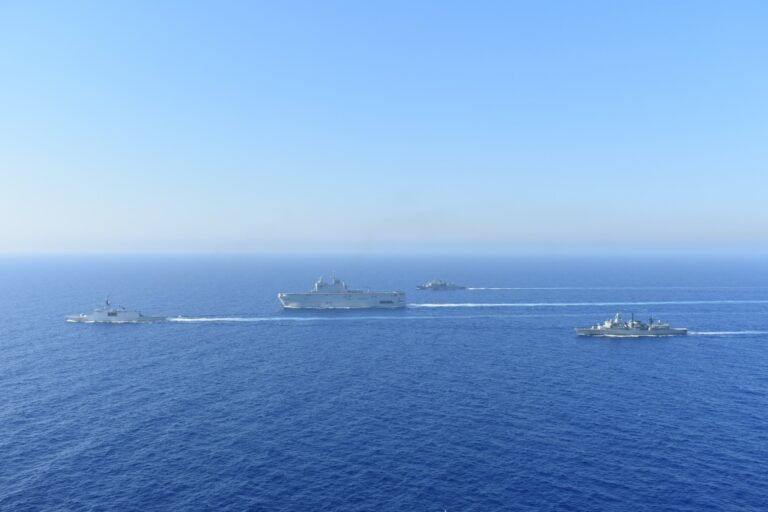 France wants to see a greater presence and role by the EU in ensuring stability in the Eastern Mediterranean, the country’s Ambassador to Cyprus, Isabelle Dumont told CNA. The French Ambassador is leaving the island one year after taking office as head of the French diplomatic mission.

Ms. Dumont has accepted a proposal to take over the portfolio for the Commonwealth of Independent States, the Balkans and Turkey at the Presidential Palace in Paris. In an interview with CNA, shortly before her departure from Cyprus, Ms. Dumont said that the goal of the French military presence in the Eastern Mediterranean region is to de-escalate tensions, while she expressed the hope that she will be able to help Cyprus from her new position as well. Also, the Ambassador stated that she discussed this with the President of the Republic, Nikos Anastasiadis, and with Cypriot Ministers, whom she informed about her departure from Cyprus.

Asked about possible EU sanctions against Turkey over its actions in the Eastern Mediterranean, Ms. Dumont said France’s position has been clear in recent months. “What we think is that there are some tools that have been decided by the EU depending on the evolution of the situation, and we should be using those tools depending on the situation,” she added.

She noted that sanctions against any country should be a tool and not an objective by itself. “We are not aiming at putting sanctions. What we want is to use all the tools possible to have the tensions decrease and international law being respected. This is the main objective,” she added.

Remarking that the Turkish leadership has not changed its position despite any calls or statements from the EU, Ms. Dumont pointed out that in the case of tensions with Greece, the role of dialogue in changing the situation has been proven. “We have to show that we are firm, that we are here present on the spot, ready for dialogue” reiterating that France’s goal with its partners is to reduce tensions and to have stability, she added.

Referring to the fact that she is leaving Cyprus so soon, Ms. Dumont said that she recently received a proposal from the Presidential Palace in Paris to return to France and work with President Emanuel Macron.

“I had to make a decision. It was not easy, but I decided to accept. I have mixed feelings now. On the one hand, I feel honored to work with the President, who I consider to be respected by the whole world and especially in Europe, and who has played a very important role since he was elected, but on the other hand I am sad to be honest,” she reported.

Also read: Macron | France will intensify its military presence in the Mediterranean

“It was not an easy decision. I am very sad. We have excellent contact with the authorities, with a lot of people. I had many projects to develop (in Cyprus),” she noted.

Asked about the Turkish provocations in the Eastern Mediterranean and the French military presence in the region with frigates and fighter jets, Ms. Dumont pointed out that “the reason we are doing this is not to escalate tensions. On the contrary, the role that France wants to play in the region is to de-escalate tensions. In order for the tensions to escalate, we must show that we are present. We have to show that France and the EU are present, that they have a place in the region.”

Remarking that this is the position of the Cypriot Government, the French Ambassador said that this is indeed a common position that is not opposed to others. “This is the position of the EU in general. The EU is very concerned about developments. As you saw our President received Mrs Merkel, the German Chancellor, a few days ago, and they have also shared this common vision of our common need to ensure stability. And obviously we share it with Cyprus as well,” she added.

She also reminded that President Anastasiadis visited Paris at the end of July and met with Emanuel Macron. “It was a very positive meeting, I have to say I was there and it was a very impressive meeting to see our Presidents so close, to have such a common vision, to share the same preoccupations about developments and the same wish to defuse tensions. And we will continue to work together on this,” she added.

Asked about the military, defence cooperation between Cyprus and France, the French Ambassador said that this is also a very important direction in the cooperation between the two countries. “Cyprus plays a very important role by its geographical location..but also as a place of stability. For us it is very important to be able to have access to Cyprus ports for our frigates when they come to the area. Now we have French frigates practically all the time in the area actually, on a nearly continuous basis, and this cooperation is quite essential, but it is not only about frigates”. She also pointed out that defence cooperation concerns military training, something we are also constantly doing and possibly strengthening,” she added.

Asked about information that sees the light of day regarding France seeking to establish a naval base in Cyprus, Ms. Dumont said that is not exactly what is being discussed. “We are having discussions on how we can enhance our cooperation, but we are not talking about a French naval base. This is not what is on the table.” The reason she is not more specific as she said is not because there are some secret plans, but because the cooperation does not involve something more than ways to enhance the already existing relationship.

She also pointed out that there is a joint effort of both sides to strengthen this cooperation. “But one should not think of a huge scheme between France and Cyprus not because it is not important, it is just because we already have an excellent level of cooperation, so we are talking about how to make it even more stable and bigger,” she added.

Asked to assess the prospects for the resumption of negotiations to resolve the Cyprus issue, the French Ambassador spoke of frustration over the issue. “Every Ambassador coming to Cyprus somewhat has in a little part of his or her brain the wish that the Cyprus problem will be solved during his or her stay in Cyprus..This means that we believe and I believe in the possibility of a solution,” she said.

She said the coronavirus pandemic made everything more difficult, including this problem, and for simple reasons, as travelling became more difficult..”I do believe still, having been here only one year, that a solution is possible, with political will, if political will on both sides, it would be possible it is not that difficult..If you have the political will on both sides, you can get to a solution that can would be profitable for all the communities of the island,” she said.

The Ambassador also expressed concern because, in her own words, “little by little the population seems to be less interested in a solution”, noting that it is not good to think that this will become easier as time goes on. “That is why I really hope that the leaders will restart working together to get a solution,” she said.

Ms. Dumont also said that another point of concern for her is that in the context of the coronavirus situation, the checkpoints have been closed and de facto there are currently no ties between the two communities.

“This is much more problematic than people think. As now I am leaving, I really want to call the people to understand that this is not a good situation, this is not a normal situation. I understand that there are sanitary reasons, but you know now, you have people coming to the south, coming to the north from abroad, you have people coming from abroad, but how come people can come from abroad potentially with the virus, but you cannot cross a few meters in Ledras Street..” she said.

She emphasized that she is not criticising and that it depends on the authorities to decide how to deal with it.

Asked about the issue of the Famagusta enclave, Ms. Dimon said that the French position is clear. “We support the United Nations’ position expressed in the UN Security Council resolutions that property should be returned to the inhabitants of Varosia. We have nothing less, nothing more to add to the UN position that we are firmly respecting,” she said.

Asked about the bilateral cooperation between Cyprus and France, Ms. Dumont said that it is excellent, in contrast to what people may think.

She noted, at the same time, that she discussed with President Anastasiadis and Foreign Minister Nikos Christodoulidis that given the existing excellent level of political relations, there could be a better relationship in terms of cooperation in matters of economy, the French language, etc.

“This is why also, I am a bit sad, again honoured but sad to leave Cyprus so quickly because I actually had a lot of projects. Just a few weeks ago, when the President was in Paris, we came back together and we were discussing the follow up of this positive meeting,” she said.

She said her successor would obviously continue to do so. “One of the initiatives that  I wanted to take was to have a second or an annex the creation of the French school in another place of Cyprus… I had a lot of discussions with Prodromos Prodromou, the Minister of Culture and Education, and we share the same vision..He is very supportive of the French-Cypriot school” she said.

She also pointed out the need for French companies to invest in Cyprus. “For that we need to have projects, projects of fundamental development like renewable energy, where French companies have something to bring to Cyprus for example for big infrastructure projects in cities…Those are the big projects..I am sure that French companies will be interested in participating”. The Ambassador also said that she  was ready just like her successor and the French embassy will be, to support any development that will enhance the bilateral relationship.

Ms. Dumont thanked the Cypriots who welcomed her so kindly, describing the quality of her contacts with political leaders and the people as incredible. “This is a memory that I will keep all my life. A short year but very intense..I will keep a lot of very positive memories from Cyprus, and Cyprus will always stay in my heart after this year”, she concluded.