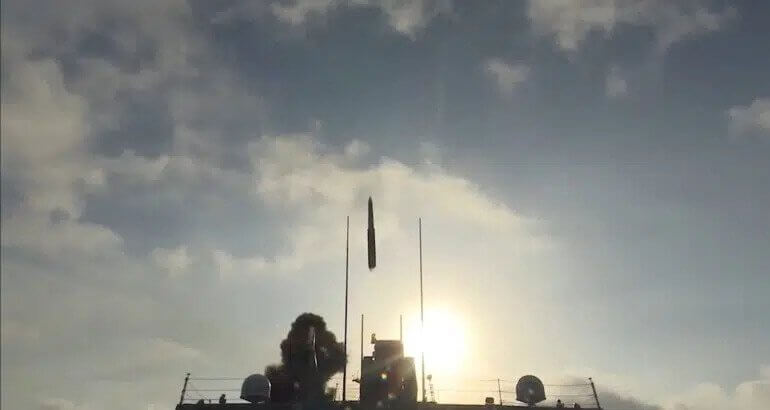 People’s Liberation Army Navy (PLAN) has released a video showing the launch of a new hypersonic missile from the Type-055 destroyer.

According to Naval News, the missile is most likely the Eagle Strike YJ-21. Naval News analyst, HI Sutton, identified the missile as the YJ-21 hypersonic anti-ship ballistic missile (ASBM), based on the CM-401 design.

The Chinese PLA Navy for the first time showed footage of the launch of a new hypersonic anti-ship cruise missile from a Project 055 destroyer. pic.twitter.com/Tdb6cz3UNR

“The new missile resembles the CM-401 design, with the addition of a large booster phase. The CM-401 is roughly analogous to the Iskander missile although its diameter is only 600mm. It is possible that the new missile is related to the older CM-401 family, although the resemblance may be coincidental. And it may have a smaller diameter,” says the analyst.

The characteristics of the YJ-21 are still unknown, as there has been no official announcement about the test launch yet. The footage, on the other hand, shows a ballistic missile launched with a “catapult” (cold-launch technique) where compressed gas is used to launch it, and – like a catapult – extracts the missile from the launch cell, while next to the main engine of the missile takes over, also carrying a hypersonic glide vehicle.

The control surfaces are rather small, which means that it is probably not an anti-aircraft missile. According to Naval News, the vertical launch system (VLS) mounted on Type 055 cruise ships can accommodate missiles with the following maximum dimensions:

If this missile proves to be the hypersonic YJ-21, the Type 055 cruise ships will undoubtedly become the most heavily armed warships worldwide.

It should be noted that China is the only naval power in the world that has hypersonic anti-ship ballistic missiles developed to deal primarily with large naval units such as aircraft carriers.

The missile was fired from a Type 055 Renhai-class cruiser. With 8 warships already in service with the Chinese Navy, new intelligence suggests that at least two more are under construction in Dalian, China.