Charalambos Petridis | The EU will develop and strengthen its role in the world
Defence Redefined
Published on 28/11/2021 at 17:00 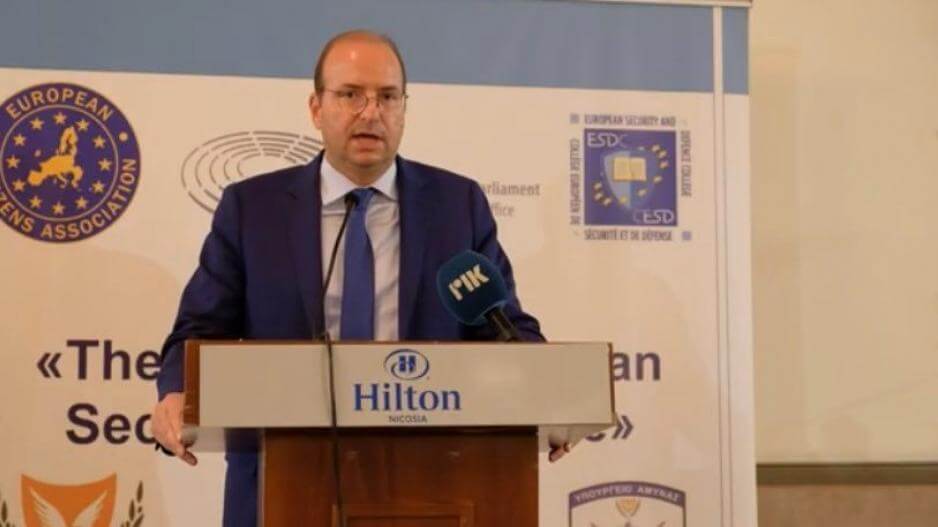 The EU will develop and further strengthen its role in the world with the Strategic Compass, said the Minister of Defence Charalambos Petridis. Strategic dialogues between Member-States are still ongoing and the process is expected to be completed during the French presidency of the EU Council in the first half of 2022, according to Petridis.

Giving a speech at a dinner for participants in a conference entitled “The future of European security and defence”, he stressed that the EU could not afford to remain a spectator in a world of growing global political competition.

The conference was jointly organised by the Ministry of Foreign Affairs, the Ministry of Defence, the European Parliament Office in Cyprus, the European Security and Defence Academy and the European Citizens’ Union, in the context of the Conference on the Future of Europe, and aims to give EU citizens the opportunity to take an active part in the debate on Europe’s priorities and challenges, including in the field of security and defence.

“Europe is not only affected by security challenges near its borders, but geopolitical change is forcing the EU to challenge and reevaluate long-term cooperation. This more hostile security environment requires the EU to increase its capacity and willingness to act. More decisive action is needed to enable the EU to defend its values ​​and interests and to strengthen its resilience in anticipating, preventing and responding to current and future threats and challenges,” he said.

“The EU cannot afford to be a spectator in a world of growing global political competition. It cannot allow its future to be limited or shaped by others.”

Petridis said that the implementation of European defence initiatives to date has not yet led to any tangible change in the Union’s collective defence capabilities or to the Union’s readiness and willingness to deploy troops.

It is widely accepted, said the Minister of Defence, “that EU Member-States are sometimes divided when it comes to strategic interests and decisions.” He also noted that there is a lack of unity and willingness to act, a delayed response to crises and insufficient coordination, which incur heavy costs.

And yet, the Minister showed that despite shortcomings, we must be positive and realistic, and we can rightfully be so, when we evaluate the historical development of EU security and defence and observe the tremendous activity and progress in this area since 2016.

“The Strategic Compass aims to consolidate the foundations and the common vision of the Member-States for EU security and defence. In this regard, we are currently preparing for the next decisive step. This process is based on a comprehensive mapping of the EU-wide threat landscape, including database analysis, for the coming years. Strategic dialogues between the Member-States are still ongoing and the process is expected to be completed during the French presidency of the EU in the first half of 2022,” Petridis said.

“With the Strategic Compass, the EU will further develop and strengthen its role in the world. It will do so by implementing its strategic autonomy operation, improving its level of ambition and more effectively linking its strategic, operational and competency needs,” he noted.

The Minister of Defence stated that the first draft of this policy document reaffirms the EU’s willingness to act proactively in order to protect its interests, protect its citizens, invest in defence innovations and capabilities and strengthen its cooperations.

“In this world of growing uncertainty, complexity and change, the EU is choosing to pursue a more strategic course of action, to increase its capacity to act autonomously to protect its interests, to uphold its values ​​and way of life and to assist in shaping the global future,” pointed out Mr. Petridis.

“In order to better defend our interests and values ​​and create a better global environment for future generations, the EU must be more dynamic and effective,” he added. “This means that we need to be more united in the positions we take and more determined and effective in exercising and exercising our influence,” he said.