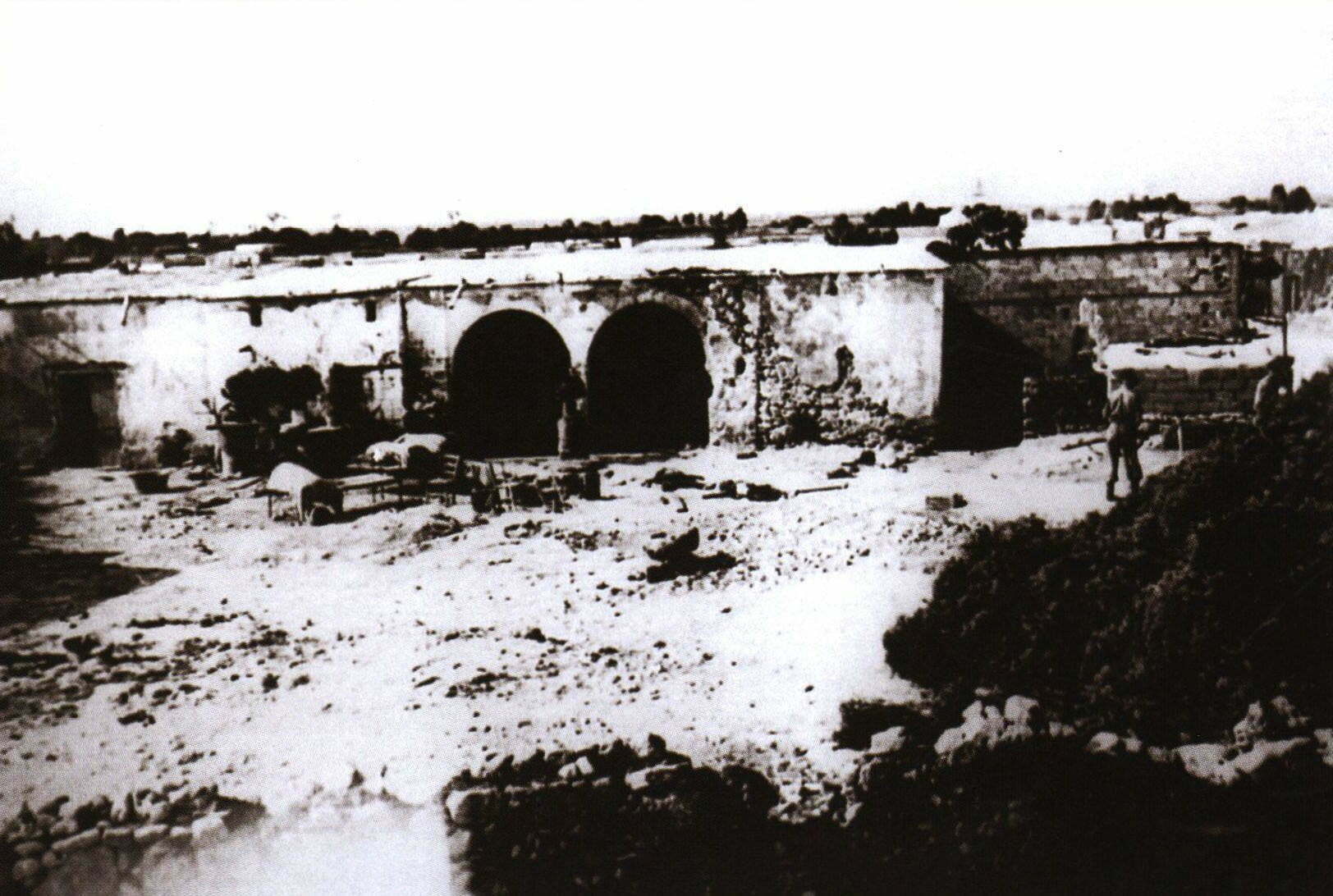 The deadliest battle of the liberation struggle of EOKA, which became known as “the New Battle of Gravia Inn”, was fought on September 2, 1958, by Andreas Karyos, Fotis Pittas, Christos Samaras and Elias Papakyriakou, in the Barn of Panagiotis Kallis in Liopetri.

The chronicle of the Legendary battle began when Elias Papakyriakou along with Fotis Pittas and Andreas Karyos went to the village of Acheritou, after a call from the head of the area, who would assign them new tasks. The plan provided for the stay of Elias Papakyriakou, Fotis Pittas, Andreas Karyos, and Christos Samaras, in a secret hideout on the river Liopetri, outside the village.

According to the narrators of the four competitors, Elias Papakyriakou, Fotis Pittas, and Andreas Karyos arrived in Liopetri at midnight on 30/08/1958.

On the night of August 31st to September 1st, the four fighters were at Nikolas Tsontos’ house. In the early morning hours of September 1, they received a message from villagers that British troops were arriving in Liopetri and so the danger of being surrounded was possible.

Fotis Pittas noticed with his binoculars that a large number of soldiers were approaching and surrounded the village. When they realized that the possibility of their escape was quite difficult, they entered Tsontos’ single-cabin car, loading all the weapons they had with them in order to escape. Their leader was the fighter Nikolas Tsontos.

They headed to the area of Laxidi, a direction which led to the dam and the river of the village, from where they could escape to Sotira. On the way, the fighters fell on British troops who had just parked in the area.

When they realized that there was no way to escape, they returned to Tsontos’ house. The four fighters got out of the car, and on the way back to the village next to the houses of Christos Masias, the four fighters were spotted by an English soldier who shouted “Halt”.

Also read: .May 10, 1956 | The hanging execution of EOKA heroes Karaoli and Dimitriou

Elias Papakyriakou opened fire first against the English soldier, injuring him. Around 02:00, the English responded with flares and shots. A fierce exchange of fire ensued, but they were unable to escape and the fighters retreated to the village.

The fighters entered the village and took refuge in a house, but the owner was overwhelmed with fear and stressed that he could not provide them with protection, because he would not tolerate any torture by the British.

On September 1, 1958, around 3 to 4 in the morning, the fighters, upon Christos Samaras’ initiative, went to the house of Panagiotis Kallis. Kallis did not refuse to offer them shelter and settled them in his Barn. He helped them hide there by first supplying them with water and food.

The English used to impose house arrests on villages they surveyed and then searched each and every house. Indicatively in Assia, Elias Papakyriakou spent 15 days in another barn when the English imposed a fortnightly house restriction and each searched house and stockyard across the whole village for 15 days. For Elias, the Barn in Liopetri was his daily routine.

When the English entered Liopetri, they announced in megaphones that the village would be placed under house restriction. They also announced that all the men had to gather in the village square. After gathering them all, they began to interrogate them with violence and beatings, while other squads with tracking dogs conducted house searches with various destructions and various arrests.

At two or three in the afternoon of the same day, the English released Κallis. Panagiotis Kallis’ wife informed him that the English searched everything, but found nothing.

Kallis entered the Barn and shouted at the fighters. They appeared through the straw and asked to learn the latest developments, the movements of the English. Panagiotis Kallis informed them about the sufferings of the male population and told them about the arrests made by the British.

A Turkish officer who was accompanying the English squad asked Kallis to show him his barn. Kallis, trying to deceive the soldiers, pointed to the kitchen instead of the barn, but they insisted and tortured him. Then, he showed them the stable of his house, then the garage but the beatings were intensified.

Then Kallis turned to his family and told them to prefer death than the betrayal of the four. He did not have time to finish his proposal and the English dragged him to the barn. A British man took Kallis for cover and shouted in Greek: “If you want your life, surrender!”

Another British soldier fired three shots at the Barn. There was no response. A dramatic scene followed immediately after, with a Greek Cypriot fighter not enduring the torture and being forced to confess that the wanted people are inside.

The British repeatedly called on the fighters to surrender. Instead, the fighters opened fire, killing a soldier and shouting “Molon Lave!” (Come and get us). In the ensuing battle, the English dropped grenades into the barn and the fighters returned fire with their firearms.

In the course of the battle, the British turned the community cinema into a makeshift hospital, where they transported their wounded. There is testimony according to which an English soldier refused to carry out an order from a superior and approach the barn, resulting in his execution by the officer himself.

With an Anti-tank rocket launcher, the British fired about 11 or 12 rockets at the Barn. Two British climbed to the roof of the Barn and pierced the roof. They later threw in clothes that had been soaked in gasoline. But in vain because the fire was extinguished. The battle lasted more than four hours. The British also called for a helicopter which dropped incendiary bombs.

When the fire threatened the lives of the fighters, they tried to break through the English fence through a heroic exit. All four were pierced by bullets. Panagiotis Kallis was transported by the British army to identify the corpses of the heroes.

The four fighters fought for 6 hours with over 200 British soldiers in a real death relay. In his letter to the then Greek Ambassador, A. Frydan, the Leader of EOKA, Georgios Grivas Digenis in Nicosia on September 10 states: “In Liopetri the losses of the English must be very serious. Greek policeman saw 7 dead and several injured. The Brigadier General wept uncontrollably as soon as he saw the scene, and the policeman from Varosia, arriving there, fired his pistol at the corpses of the dead from his rage.”

With their death, the EOKA Fighters moved the world community. A monument for the four fighters has been erected at the site of the battle.

* Photo from the file eoka.gov.cy. The photo shows the bodies of the heroes in front of the Barn.