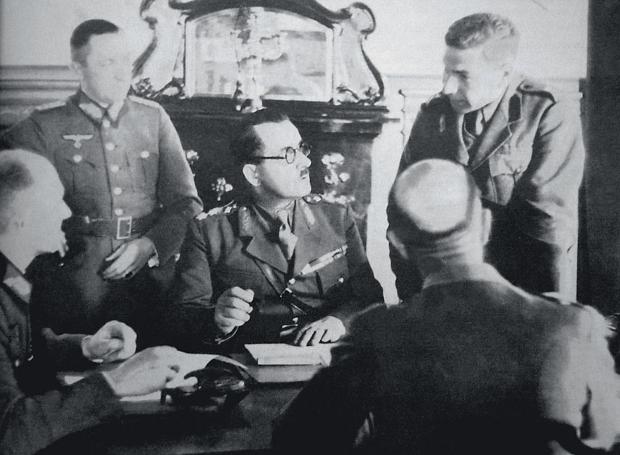 The German attack against Greece in World War II (Unternehmen Marita) commenced on April 6, 1941. The battle of Greece ended with the fall of Kalamata on April 30 with the evacuation of the Commonwealth Expeditionary Corps and the occupation of the entire Greek territory by the Axis powers.

The initial attack took place on the defensive lines of the “Metaxas line” (19 forts in eastern Macedonia between Mount Beles and the river Nestos and two more in western Thrace). The initial attack was launched on Bulgarian soil and was supported by artillery and bombers. The resistance in the forts under General Konstantinos Bakopoulos was courageous and decisive, but it ultimately failed.

The rapid collapse of Yugoslavia allowed the 2nd Panzer Division (which started from the Strumica valley in Bulgaria, advanced into Yugoslav territory and then headed southwards along the Axios valley) to occupy the strategically important city of Thessaloniki on April 9. As a result, the Greek forces manning the forts (the Army Unit of Eastern Macedonia) were cut off from the rest of the country and the General Staff allowed them to surrender if they wished.

The surrender ended on April 10, the next day. On the same day (April 10), German forces crossed the Greek-Yugoslav border near Florina in western Macedonia after defeating all resistance in southern Yugoslavia. The Germans passed through the defensive positions of the Greeks and the Commonwealth in the area of ​​Klidi on April 11-12 and moved south and southwest.

While pursuing the British to the south, the movement to the southwest threatened most of the Hellenic Army (14 divisions) fighting the Italians on the Albanian front. The Army began to retreat south, first from the northeast on April 12 and finally from the southwest on April 17. The German move to Kastoria on April 15 made the situation critical, threatening to halt the Greek retreat. The generals at the front began to consider their surrender (only to the Germans), despite pressure from the General Staff to continue the battle to cover the surrendered British troops.

Thus, on April 20, George Tsolakoglou, with the support of several generals, overthrew the commander of the Army of Epirus, Ioannis Pitsikas, took over as commander of the Army himself and signed a truce with the commander of the 1st SS Panzer Division Leibstandarte Adolf Hitler in Metsovo on the same day. When the situation culminated and the Greek army was in danger of being surrounded, Tsolakoglou took the initiative to capitulate, despite the clear and unequivocal orders of the king, the government and the General Staff, to fight until the end.

On April 21, he signed a surrender protocol with the Italians in Ioannina, while he signed a second surrender protocol on April 23 in Thessaloniki. On the same day in Athens, General Papagos resigned from his post, while the king and his government left the mainland for Crete. Around the same time, the Commonwealth troops made a final stop at Thermopylae before their final retreat to the Peloponnesian ports, where they would be evacuated to Crete or Egypt. German forces occupied the bridges of the Isthmus of Corinth, entered Athens on April 27 and completed the conquest of the mainland and most of the islands at the end of the month along with the Italians.

After the Germans left Athens (October 12, 1944), Tsolakoglou was arrested and taken to Averof prison. With the Constituent Act 6/1945 he was referred to the Special Court to be tried for capitulation and cooperation with the enemy. His trial lasted from February 21, 1945 to May 21 with his death sentence. On August 19, 1945, the Council of Grace, following his appeal, converted the sentences into life imprisonment, as it recognized the mitigation of his military offer to the Nation.