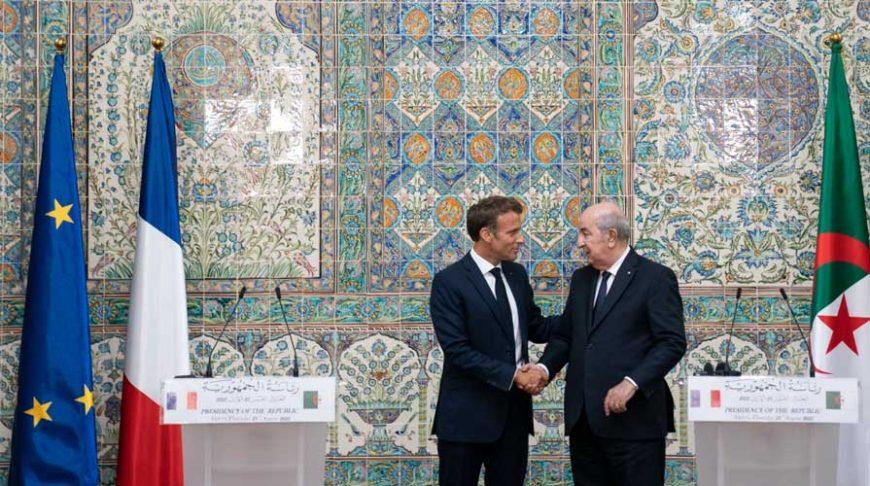 The plane of the French head of state, who was accompanied by a delegation of more than 90 people, landed at noon in Algiers. The French President was welcomed at the airport by his Algerian counterpart, Abdelmadjid Taboun, with military honors.

For Paris, the visit mainly aims to “rebuild” the bilateral relationship, based on “youth and the future”. For Algiers, the visit confirms its strategic and diplomatic importance in North Africa and the Sahel.

The two leaders then went to the Martyrs’ Monument, an important place for Algerians dedicated to the war of independence (1954-1962) against France. The visit coincides with the 60th anniversary of the end of the war and Algeria’s declaration of independence in 1962.

On the Algerian side, Macron’s arrival was hailed as a sign of the will to “promote a new vision based on equal treatment and the balance of interests,” according to Algeria’s official news agency APS.

Macron’s choice to make this trip at the start of his second five-year term also responds, according to Algiers, to a “recognition of Algeria’s important role in the region” and a “dynamic return of Algerian diplomacy on the international stage”.

Given the risk of instability in the Maghreb, the conflicts in the Sahel, and the war in Ukraine, the improvement of relations between France and Algeria is imposed as a political necessity.

Since the beginning of the war in Russia, Algeria, the first producer of natural gas in Africa and one of the top ten countries in the world, is sought after by Europeans looking to reduce their dependence on Russian gas.

Algerian gas is not the main focus of the visit and there will be no major contract announcements or major negotiation, the Elysée says, although the head of energy giant Engie, Catherine McGregor, is part of the delegation accompanying Macron.

The two Presidents will also discuss the situation in Mali, where the French Army recently withdrew from, and the growing Russian threat in Africa. Algeria has a central role in the region due to its thousands of kilometers of border with Mali, Niger, and Libya, while also maintaining a close relationship with Russia, its number one arms supplier.

It is Macron’s second visit to Algiers as President, following the first visit in December 2017. Relations between the two countries heralded as promising at the time with a new French President born after in 1962 and freed from the burden of history, which had characterized French colonialism as a “crime against humanity”.

Yet the apology expected by Algeria for colonialism was never given, limiting the French President’s outreach, while adding to misunderstandings.

In October 2021, statements by Macron blaming the Algerian “politico-military system” for its stance on the issue of memory and his questions about the existence of an Algerian nation before colonialism led to the rupture. Since then, the French President has made amends and both Presidents have decided to restore cooperation between the two countries.

The sensitive issue of visas granted by France will also be at the heart of the agenda, as Emmanuel Macron decided in 2021 to cut visas in half in the face of Algeria’s reluctance to take back Algerian nationals unwanted in France.

During his visit, Macron also met with Algerian young entrepreneurs on Friday.

Also read: Algeria | Rejects any interference in its internal affairs and closes its airspace to French military aircraft