7th Forum of the Commanders of European Land Forces completed – PHOTOS
Defence Redefined
Published on 12/11/2021 at 11:23 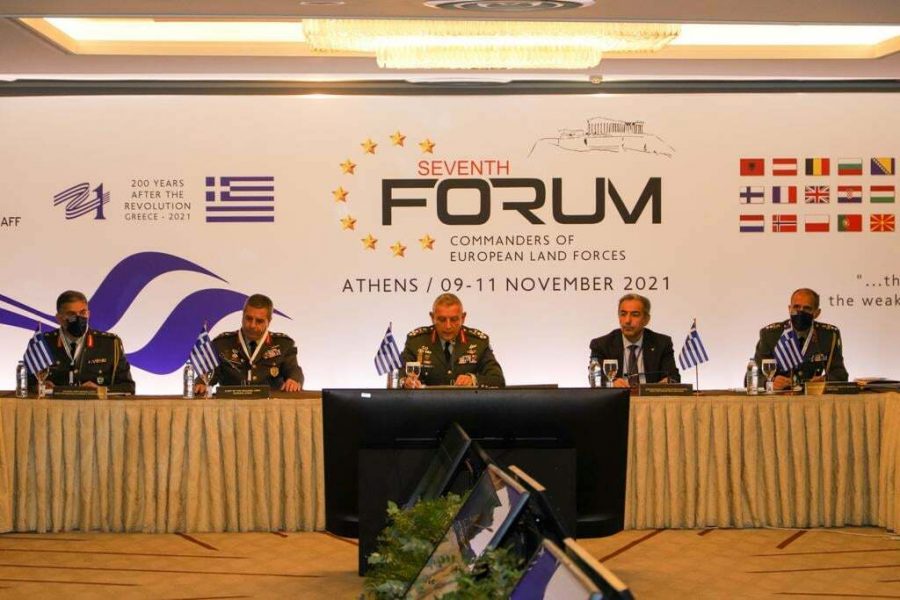 New technologies, new strategic doctrines, hybrid threat issues were among other issues on the agenda of the 7th Forum of the Commanders of European Land Forces held in Athens from November 9-11.

According to the announcement of the Hellenic Army General Staff, the meeting was attended by 28 Chiefs of Defence of European States and the Commander of the US-Europe-Africa Command (USAREUR-AF). The Chief of the National Guard, Lieutenant General Democritus Zervakis, also participated.

The main topic of the Forum, which was held for the first time in Greece, was the challenges faced by the European Armies and the ways to deal with them. In particular, the topics discussed were the rapid advancement of technology and its impact on the combat capability and survivability of the Land Forces, humanitarian crises such as immigration/refugee flows and their handling as challenges to stability and security, the threat of climate change, the development of military doctrines and tactics, the demographic and cultural impact on the recruitment of highly qualified personnel and the impact of these factors on the deployment of Land Forces as well as the impact of the COVID-19 pandemic in the fields of Defence and Security.

In addition to the participating officers, individuals in academia, politics and the defence industry made statements. Specifically, the opening of the Forum was announced by the Deputy Minister of National Defence, Mr. Nikolaos Hardalias, followed by the greeting of the Chief of the Hellenic National Defence General Staff, General Konstantinos Floros. Furthermore, the opening speech was delivered by the Chief of the Hellenic Army General Staff, Lt. General Charalambos Lalousis. Speeches were also made by the Deputy Minister of Education and Religion in charge of higher education and Associate Professor of International Law and Foreign Policy at Panteion University, Mr. Angelos Syrigos, the Honorary Chief of the Hellenic National Defence General Staff and Chief of the European Union Military Committee (EUMC), General (ret.) Michael Costarakos, the Honorary Chief of the National Guard General Staff and Honorary Commander of the 1st Army / EU-OHQ, General (ret.) Elias Leontaris, the Executive Director of the Institute of International Relations of Panteion University, Mr. Konstantinos Filis, the Associate Professor of Comparative Politics of Panteion University, Mrs Maria-Eleni Koppa, the Chairman of the Board of the Hellenic Manufacturers of Defence Material Association, Mr. Anastasios Rozolis, the Commander of the Land Forces of Germany, Lieutenant General Alfons Mais, of the Netherlands, Lieutenant General Martin Wijnen, and of Romania, Major General Iulian Berdilă.