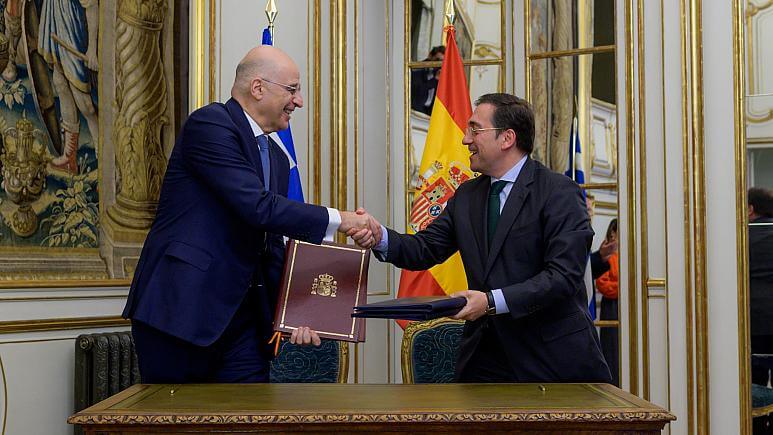 The meeting of Foreign Minister, Nikos Dendias, with his Spanish counterpart, Jose Manuel Albares, in Madrid ended with the signing of two memoranda of understanding for political consultations and cooperation in the field of diplomatic training. 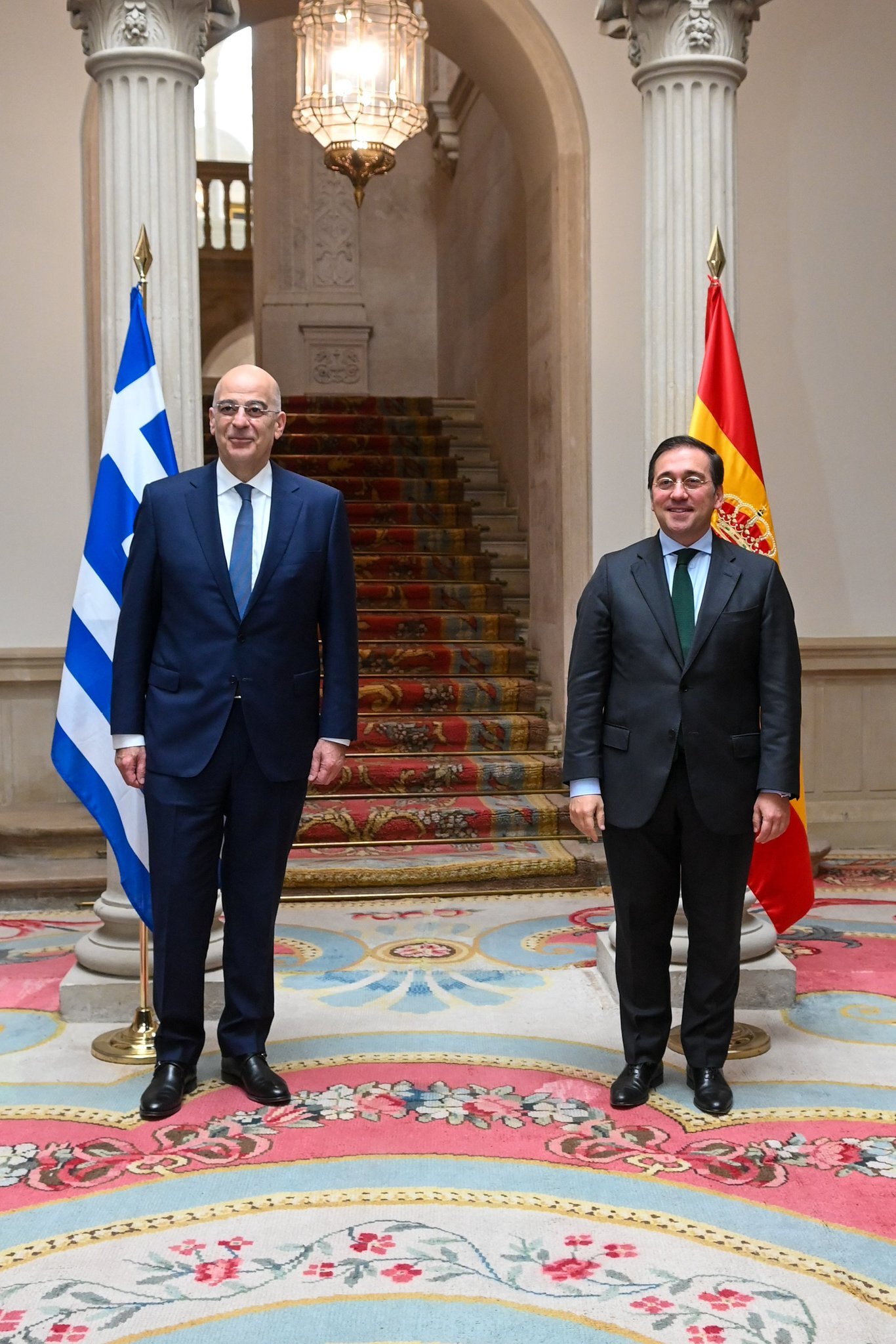 During the meeting, as mentioned in a post by N. Dendias on Twitter, the two Foreign Ministers discussed the growing Greek-Spanish cooperation and coordination within the EU on common values, developments in the Eastern Mediterranean, the Western Balkans, and North Africa, the Russian invasion of Ukraine, energy security and immigration as well as the forthcoming NATO Summit in Madrid.

After the end of the meeting and extended talks, joint statements were made to the press.

Foreign Minister, Nikos Dendias, in joint statements with his Spanish counterpart, José Manuel Albares, stressed that Russian aggression is a strong reminder that revisionism is a significant threat to international peace and order and should not be tolerated or encouraged, wherever it comes from.

Nikos Dendias also informed his Spanish counterpart about the recent unprecedented increase in Turkish violations of Greek airspace and overflights over Greek islands and stressed that such provocative behavior not only violates the fundamental principles of international law, but also undermines the cohesion of the NATO Alliance.

Furthermore, the cooperation between the two countries in the EU was also on the agenda, in view of the Spanish Presidency of the EU Council next year, while a separate report was made by the Forum of the Mediterranean Countries of the European Union (EUMED9), with Nikos Dendias characterizing it as important and in line with Spain’s will to be strengthened.

As for NATO in the run-up to the Madrid summit in June, Nikos Dendias and Jose Manuel Albares spoke of the need to maintain and strengthen its unity, given the current security situation. In addition, they discussed developments in North Africa, including Libya.

The Greek Foreign Minister made special reference to the bilateral cooperation in the UN, stating that the two countries have agreed to mutually support their candidacies for a position in the UN Security Council. 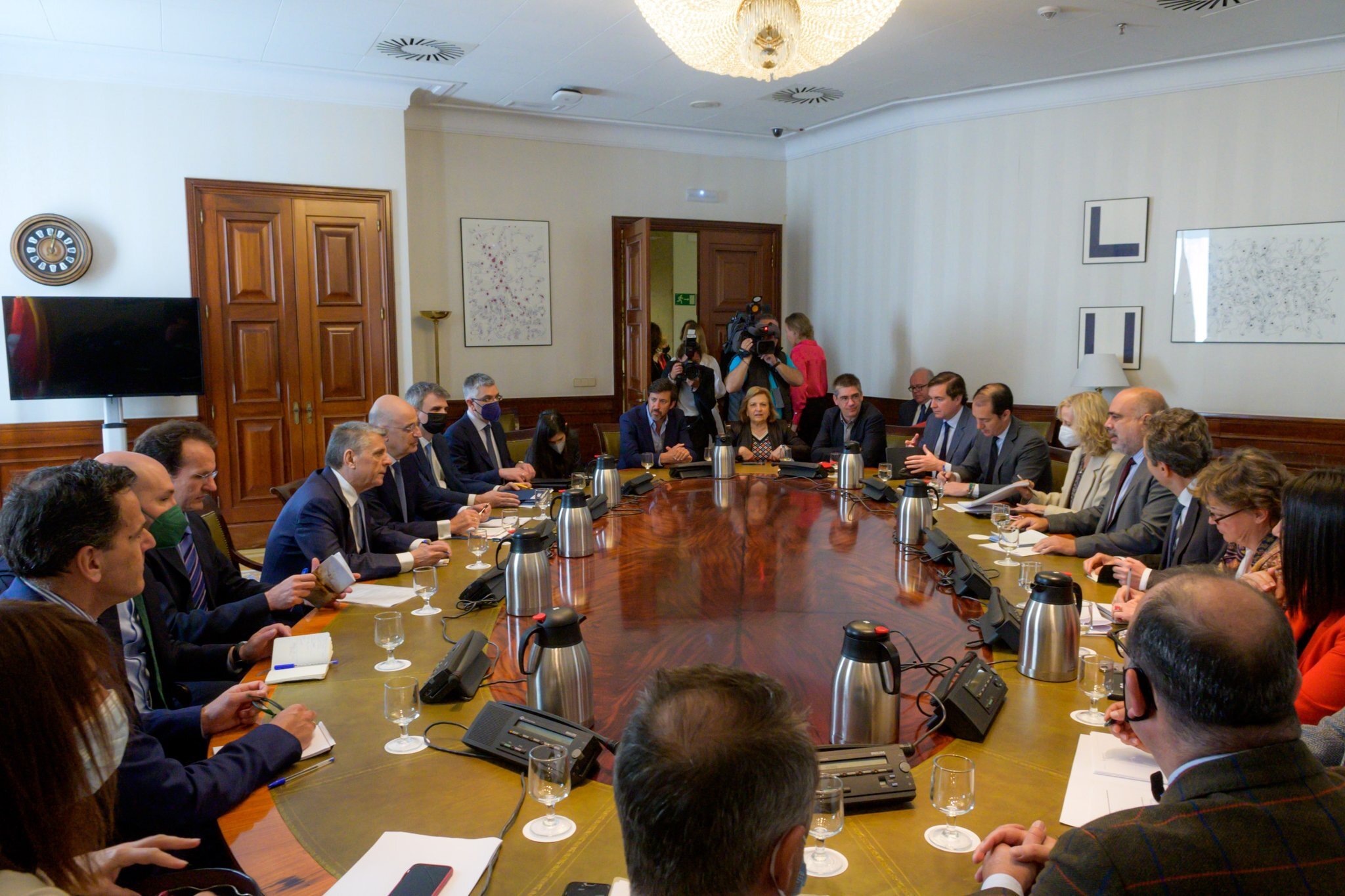 Earlier, Nikos Dendias met with the President of the Spanish House of Representatives, Meritxell Batet, with whom he had “a fruitful discussion on strengthening inter-parliamentary cooperation, the common Mediterranean identity and the EU issues and challenges for Europe, including the Russian invasion of Ukraine and the refugee-immigrant issue.”

Nikos Dendias’s visit to Madrid began with his meeting with the chairman and members of the Foreign Affairs Committee of the Spanish Congress of Representatives. The meeting focused on strengthening the ties between Greece and Spain and the cooperation on the basis of common values, EU issues, the invasion of Ukraine, and regional developments.

Also read: Charles Michel in Thrace for the inauguration of the new LNG terminal