US support of Cyprus’ sovereign rights reaffirmed in Christodoulides – Hale meeting
Defence Redefined
Published on 16/08/2020 at 19:01 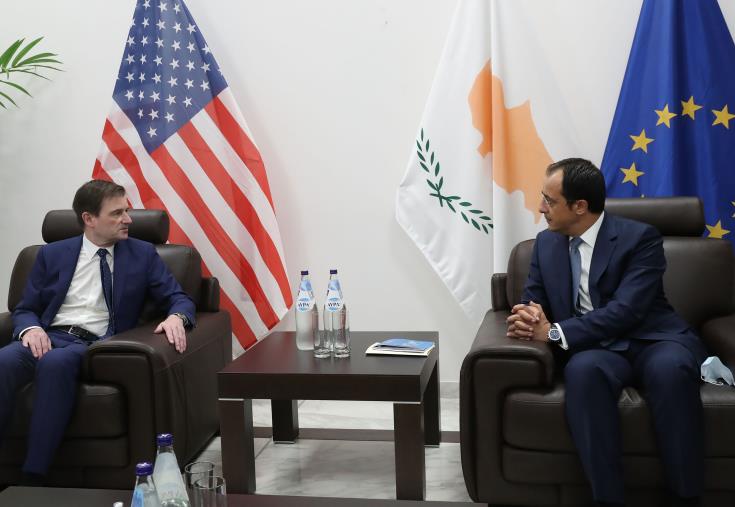 US support of the Republic of Cyprus’ sovereign rights was reaffirmed while the need for everyone to respect its right to exploit the natural resources within its maritime zones was stressed during a meeting between Cyprus’ Foreign Affairs Minister Nikos Christodoulides and US Under Secretary for Political Affairs David Hale held on Sunday in Cyprus.

“In the context of the meeting bilateral relations between Cyprus and the United States were reviewed and specific steps were examined to further enhance them, among others areas, in the fields of security and combating terrorism, energy, economic and trade cooperation, as well as in the ongoing dialogue to lift visa requirements for Cypriot citizens visiting the US,” a Foreign Affairs Ministry press release says.

It is further added, that the Cyprus problem was also discussed and that Christodoulides briefed Hale, inter alia, “on Turkey’s and the Turkish occupying regime’s provocative announcements and activities as regards Famagusta, which violate relevant Security Council resolutions and have as their main goal to create unacceptable faits accomplis which will negatively impact the prospects of a Cyprus solution on the basis of a bizonal, bicommunal federation.”

Furthermore, according to the press release, the cypriot Foreign Minister ”had the opportunity to inform Hale in detail and to exchange views on the situation in the Eastern Mediterranean, in view of Turkey’s continued illegal activities on various levels and in various directions.”

Christodoulides and Hale also exchanged views on the situation in the wider Middle East region, Northern Africa and the Gulf, as it has evolved after the most recent developments, the press release concludes.