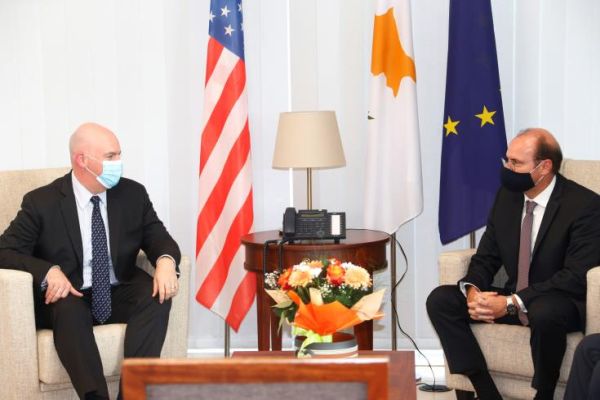 Assistant Secretary of State for Military Affairs Clark Cooper referred, in a press conference, to the results of his visits to Greece, Cyprus and Bulgaria in mid-October.

In relation to Greece, the first stop of his tour, from October 14-17, he had consulted with a number of senior government officials, including Foreign and Defence Ministers Nikos Dendias and Nikos Panagiotopoulos, with whom he worked on broadening the bilateral and allied efforts to promote peace and stability in the region and also discussed opportunities for trade in defence equipment.

Mr Cooper visited the Souda Base, as well as the missile test facilities used for surface-to-air and air-to-air missile tests, which trains NATO and non-NATO allies.

“We discussed plans to provide training opportunities to the military personnel of the Republic of Cyprus. This is done through the IMET program, or the International Military Education and Training program, and then, of course, we entered into the recently announced extension of access to US non-lethal defence systems and services controlled under ITAR.”

Also read: US Military Education and Training for the Republic of Cyprus | Its goals

The US Assistant Secretary of State said that while he was in Cyprus, significant progress had been made in reforms to combat money laundering.

“After the financial crisis of 2013, important work was done in this area. However, I specifically noted that Cyprus has not yet taken the necessary measures to deny port access to Russian ships. These and other steps are certainly necessary, but they are also part of the strategy in the Eastern Mediterranean, as well as the energy partnership law of 2019. We certainly want the Republic of Cyprus to continue in this direction. It would also allow us to continue to have access to ITAR-controlled defence systems.”

He also said that he had the opportunity to visit the joint rescue coordination center “Zenon”, which coordinates rescue operations, control of migratory flows and human trafficking 24 hours a day.

Asked how he envisions the Souda Base, the US official said it provides significant logistical support, but it is not really a big footprint.

“Of course, it is important to support the supply and not just the maritime and aviation interests of the US and Greece. In fact, it provides support for other NATO interests. Yes, there is a long term investment there. Again, not a big footprint, but a very high-volume one to which we and our Greek counterparts have committed.”

Asked about the prospects for the future sale of F-35 aircraft in Greece, Cooper said similar issues are being addressed in cooperation with partners in the program.

In particular, regarding the prospects of selling the F-35s through an intergovernmental agreement (FMS), he said that the F-35 is usually preferable when we are talking about an important platform.

“Why? It is certainly useful when talking about the procurement process, the requirements and special needs that may need to be addressed with an ally or partner. It is certainly not possible to preview the developments in this area, but it is safe to say that in any large supply such as the F-35, the FMS process is definitely preferred.”

Asked about the lifting of the embargo and the question of access of Russian naval vessels to Cypriot ports, the US official said the removal was of a limited nature.

“But, in order to move further with the Republic of Cyprus, we must see further assurances about their ability to deny port access to Russian naval vessels. These are very honest conversations. We certainly appreciate the traditional nature of these visits, which may have had some historical economic interest. But along the way, as Cyprus takes on a bigger role in the Eastern Mediterranean and greater responsibilities that support the demands of the European Union and NATO, we need to be more interoperable with them, and that requires to address the portage issue.”

Mr. Cooper said that there is a desire in the United States to move forward and that is why looking at the law on the security of the Eastern Mediterranean, Cyprus is influencing this area and we want to have a closer relationship with them bilaterally and multilaterally.

Regarding Turkey and the challenges to the detriment of Greece and Cyprus, the US Assistant Secretary of State said, of course, that the US wants to stay in the West and that Turkey has a role to play in the alliance.

“But we also do not agree with any challenge from Ankara to allies and partners. We have certainly discouraged any provocative behavior. For many reasons, we have encouraged Turkey and Greece, as well as Turkey and Cyprus, to be able to de-escalate. One, on a practical level, because we want to avoid any kind of accident that could happen with so much traffic and potential risk. And also from the NATO point of view, using NATO channels to work for de-escalation. It is not in anyone’s interest, including Turkey, to escalate in this area.”

Asked why Ankara or the Turkish Republic of Northern Cyprus were not included in the visit, Mr Cooper said visits were made on a regular basis. Turkish Deputy Foreign Minister Philip Reeker was recently in Turkey, and there are strong lines of communication with Ankara, including through US Ambassador David Sutherfield. Mr. Cooper avoided referring to the “Turkish Republic of Northern Cyprus.”

Asked about possible CAATSA sanctions in Turkey over the purchase and activation of Russian S-400 missiles, Cooper said the United States was clear with Turkey that the supply of the missiles was unacceptable and risked sanctions.

“Sanctions have always been in mind. One thing to keep in mind when talking about CAATSA provisions is that there is no set schedule for reviewing or issuing sanctions. So it was something we tried to avoid because of Turkey’s alliance with us and NATO, but I would just like to say that assuming that they are no longer viable is also not accurate.”