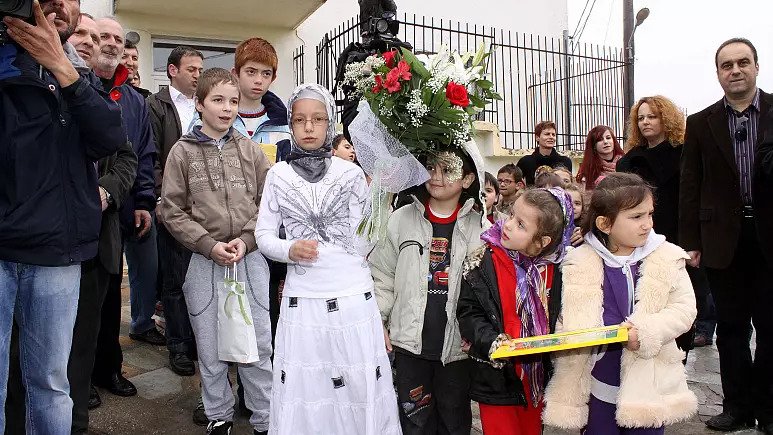 “Unfortunately, once again, Ankara completely reverses reality in order to present positions that cannot withstand criticism. We reject them in their entirety,” says the representative of the Greek Ministry of Foreign Affairs, Alexandros Papaioannou, in response to a journalist’s question regarding the objections of the Turkish Ministry of Foreign Affairs over minority education in Thrace.

As he points out, according to Euronews, the decision to suspend the operation of schools is made according to the exact same criteria across Greece, that is, when the number of students falls below the minimum threshold of nine students.

It states that in the school year 2022-2023, only in the Region of Eastern Macedonia-Thrace, in addition to the four minority primary schools, the operation of another 29 non-minority primary education units is suspended. “Therefore, no one can speak of unfavorable treatment of minority students,” he underlines.

“These data clearly demonstrate that the educational choices of the Greek State are made equally and without discrimination for all Greek citizens, with the sole aim of providing a high level of education for the benefit of the students themselves.”

“Turkey must put an end to its misleading rhetoric and understand the reality that demonstrates that the Muslim Minority in Thrace, living in a free and democratic European country, fully enjoys its freedoms and rights, just like all Greeks citizens,” he emphasizes characteristically.

On the contrary, he adds, “the very few schools of the Greek minority in Turkey bear witness to the violent and systematic uprooting of the Greeks from their ancestral lands.”

He reminds that “for the prosperous Muslim minority in Thrace, ninety-nine primary schools will operate during the next school year, while “only three will operate in Constantinople, one in Imbros and none in Tenedos”.

He also reminds that the Muslim minority in Thrace numbers approximately 120,000 members, while the Greek minority in Turkey does not exceed 3,000 people, whereas at the time of Lausanne the two numbers were equal.

“Unfortunately for Turkey, the numbers speak their own undeniable truth about who respects and implements the Treaty of Lausanne,” he stresses. “The Hellenic Republic is a European state of law that fully protects and guarantees the human rights and freedoms of its citizens,” he concludes. 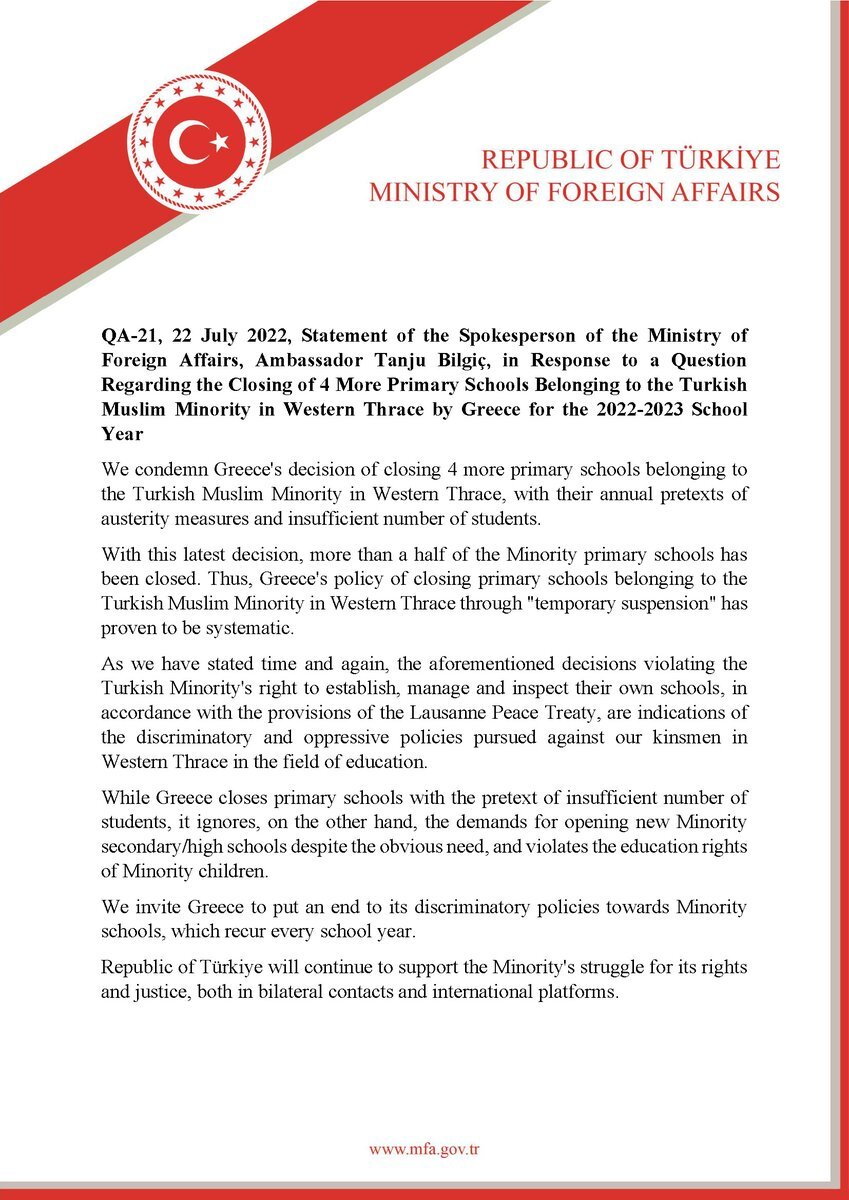 Statement of the Spokesperson of the Ministry of Foreign Affairs, Amb. @TanjuBilgic, in Response to a Question Regarding the Closing of 4 More Primary Schools Belonging to the Turkish Muslim Minority in Western Thrace by Greece (2022-2023 School Year) https://t.co/zAQwIUxjA3 pic.twitter.com/O0Th2q2c2L

A day before, the press representative of the Ministry of Foreign Affairs of Turkey, Ambassador Tanzu Bilgic, in a statement, claimed that Greece is closing “another 4 primary schools belonging to the Turkish minority of Western Thrace, using the excuse of austerity measures and the insufficient number of students every year.”

He added that “with this latest decision, which has been repeated in recent years, more than half of the minority primary schools have been closed. Thus, it appears that Greece’s policy of closing the primary schools of the Turkish minority in Western Thrace through ‘temporary suspension’ has become systematic.”

Even the representative of the Turkish Ministry of Foreign Affairs argued that this is how the Lausanne Peace Treaty is violated and these actions “are a reflection of the discriminatory and oppressive policy that has been practiced in every sector for years at the expense of our compatriots in Western Thrace in the field of education.”

Also read: Zemenidis | Rumors that Erdogan will announce the annexation of Occupied Territories on July 20