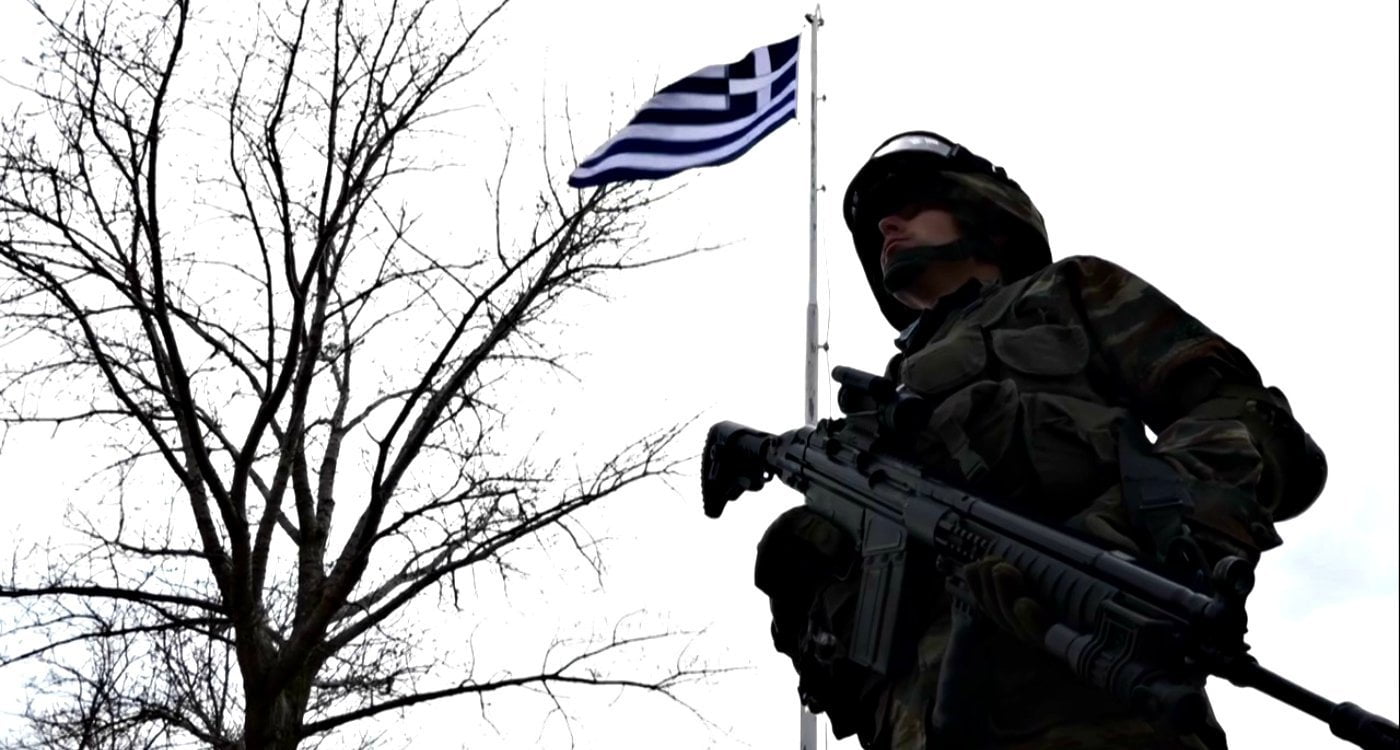 At the end of February and in conjunction with the developments in Syria, Turkey, in a provocative action, decided to push “refugees” to Greece who could then be directed to European countries.

Turkey’s goal was to blackmail the European Union while trying to gain active support from European countries on the issue of the Syrian province of Idlib.  Turkey’s illegal action began with the implementation of propaganda, both to the international community and to Turkish public opinion, which Erdogan wanted to manipulate by turning its attention from the Syrian problem to refugees.

The Turkish media, together with the intelligence services, encouraged and directed the immigrants mainly to the Greek border in the Kastanies area of ​​Evros. Thousands of immigrants were reportedly transported to Evros by Turkish military vehicles and buses. Seeing the volume of immigrants growing, on February 28, the Greek government decided to close its borders in order to prevent illegal entry into the country.

A similar attempt by the Turkish government was made on the islands of the eastern Aegean, by sending a number of immigrants to Lesvos and Kos with the Greek Coast Guard reacting vigorously in all cases and forcing the return of the boats to Turkish shores in most cases.

Political interventions and suggestions made by the European Union (EU) and the Member States were not enough to stop Erdogan’s grandiose plans. On February 29, the Greek Police gave their first “battle” against the immigrants, who attempted to invade Greek territory. The Greek security forces made limited use of tear gas, in responding to stone-throwing and attempts to destroy the fence, while the collective effort was strengthened by military forces and the European Frontex with 100 executives.

The situation worsened in the days that followed. In particular, on March 1st the Greek media reported that 10,000 attempts were made to enter Greece within 24 hours at the Evros border. Large groups of young people repeatedly tried to enter Greek territory through Kastanies forest, throwing stones, tear gas, sticks and iron bars towards the Greek side, while some were holding knives and threatened the Greek police. The Greek forces successfully prevented illegal immigrants from entering Greece. Αfter three days, out of the 3,000 people who tried to invade illegally, only 130 managed to trespass only to be arrested later and sentenced to severe punishments.

The scene in Evros, which was reminiscent of a war zone, was also marked by injuries of security officials. Fortunately, there were some less serious incidents, such as the one taking place on March 2, when a police officer was taken to Didymoteicho Hospital after being hit in the face with a stone. 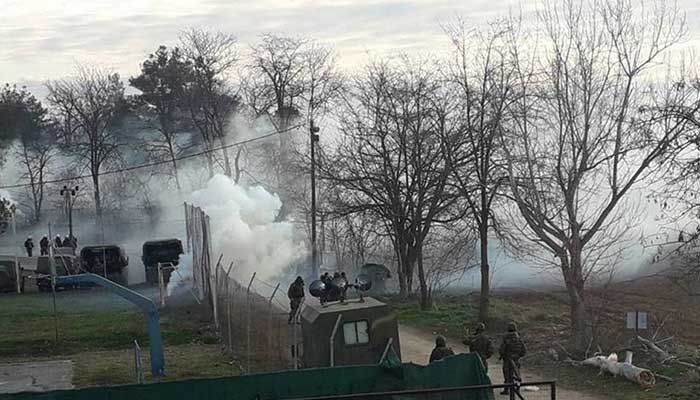 The deteriorating situation continued in the following days. Chemicals from the Turkish security forces, stone-throwing and thousands of attempts to enter Greek territory set up the daily scene in Evros. A revealing video shows even a Turkish armored vehicle of the type HIZIR ATES (which was bought with EU funds) trying unsuccessfully to destroy the fence. Throughout the episodes, the Greek authorities handled the situation with absolute calmness and determination, while even special constructions of the Greek Army were recruited, such as the original fan and the “DAVID” fire trucks.

On March 8, the Cypriot government, following the developments, sent a 21-member Squadron of members of the Emergency Mobilized Respond Unit (MMAD), which found itself in the Greek naval strongholds and Greek-Turkish borders after traveling by military transport plane of the Greek Armed Forces. The Cypriot force was deployed in sensitive areas of the Greek border and performed its duties to the fullest extent, while gaining valuable experience in the field of operations.

On the Greek-Turkish border also were members of the elite commandos of counterterrorism force EKO Cobra (Einsatzkommando Cobra) of the Austrian Federal Ministry of the Interior together with a specially designed armored vehicle Survivor Type R.

The next few days were critical to strengthening the Greek Forces in Evros. Ιn addition to the titanium Greek Army Engineer’s work with repairs and reinforcements of the fence and other additional defence works, the security forces were provided with 8 seized MRAP military vehicles that were destined for Libya and were seized on the …

On March 18, an attempt was made to wake the tension among immigrants. Specifically, guided and organized actions to violate the borders of Greece, both in the area of ​​Kastanies and in various places in the southern part of the Prefecture of Evros by groups of immigrants over 100 people were prevented by the Greek and European security forces. 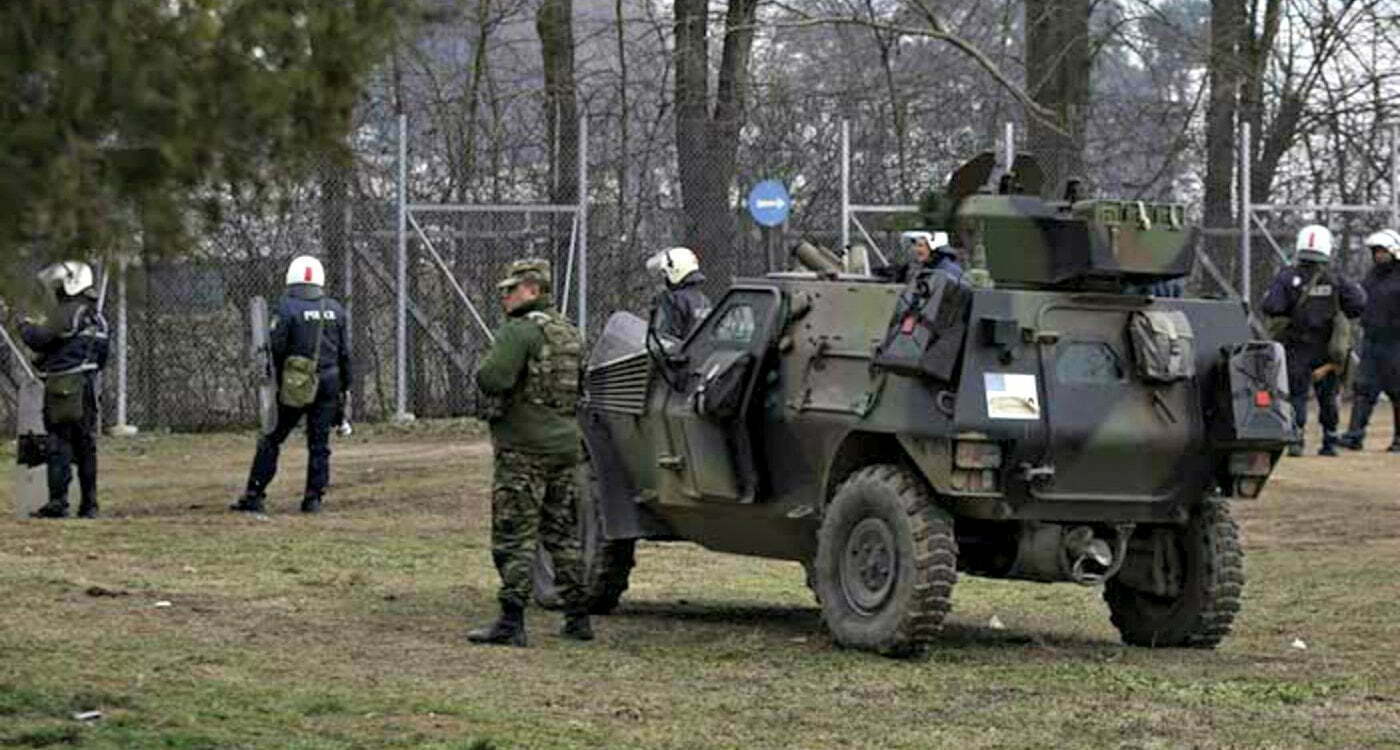 Erdogan’s plan and the hybrid war he organized against Greece have sunk. On March 20, the first piece of information regarding the departure of immigrants from the Greek-Turkish border comes from Non-Governmental Organizations in the region.

However, in another desperate attempt, the immigrants tried to enter Greece on March 22. The APE-MPE response from the region stated that “incidents unfolded at the Kastania customs office. From 11:30 in the morning and at regular intervals until the afternoon, the Greek guard forces of the border fence received a large number of chemicals from the Turkish authorities, while preventing new attempts to enter the country.”

On March 27, 5,800 refugees were transferred from the Greek-Turkish border to nine Turkish prefectures after a fire had broken out the night before the makeshift camp. Turkey’s sudden action to remove the refugees is believed to have been made out of fear of the spread of the COVID-19 corona. This development was confirmed on the same day by the Greek Minister of Defence, Nikos Panagiotopoulos.

The departure of immigrants from the Greek-Turkish border certainly leaves no room for complacency as, with the end of the pandemic and a return to normalcy, Turkey may re-implement its plan which failed in March.

The Greek Security Forces and the Armed Forces have gained significant experience and in the event of a new attempted immigration invasion they will be able to handle the situation with even greater efficiency and determination.