Putin – Macron | Positive signs for convergence in meeting of Russia and France leaders
Defence Redefined
Published on 08/02/2022 at 15:54 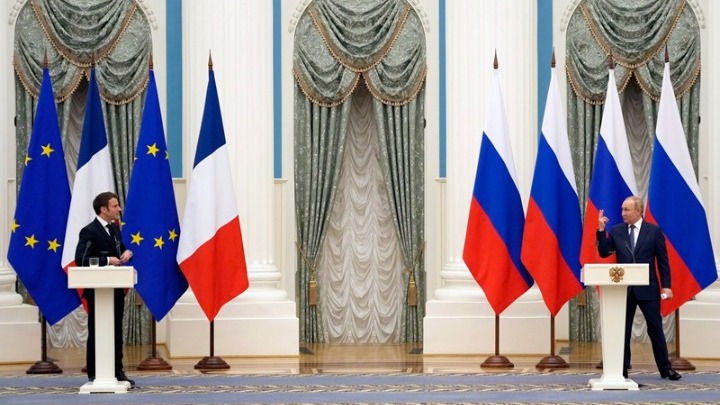 Russian President Vladimir Putin has described talks with his French counterpart as “useful and meaningful” and French President Emmanuel Macron has seen signs of convergence over the Ukraine crisis even though there are still disputes. Putin also argued that some of Emmanuel Macron’s ideas could form the basis for further joint steps.

The French President traveled to the Russian capital to hold talks with Vladimir Putin amid a Moscow-Western confrontation over the concentration of Russian troops near the Ukrainian border and the Kremlin’s demands for “security guarantees” from NATO.

In a joint news conference with the two leaders after their meeting in the Kremlin, Putin said some of Macron’s ideas on security were realistic and that the two would discuss them again after the French President’s visit to Kiev.

It was agreed that after Macron’s trip to Kiev there will be a telephone conversation between the two for further exchange of views.

Also read: Ukraine Accelerating preparations for the invasion, according to US intelligence services

Vladimir Putin stressed that if Ukraine joins NATO, the Europeans will be dragged into a military conflict with Russia, from which there will be no winners. He pledged that Russia would do everything possible to reach a compromise for the benefit of all.

The Russian President expressed hope that the crisis could finally be resolved peacefully and added that he saw no alternative to what was agreed in Minsk to resolve the conflict in eastern Ukraine.

For his part, Emmanuel Macron said that in talks with his Russian counterpart Vladimir Putin, he saw signs of convergence on the Ukrainian crisis, although there are still disputes.

According to him, he told Putin that the creation of a new security strategy in Europe should not be done by canceling the right of states to join the NATO alliance.

Macron also praised the Ukrainian leader, Volodymyr Zelensky, noting that he managed to keep his composure despite the concentration of Russian military forces near the border of his country.