Poland and Belarus | Mass arrival of immigrants at the border – Diplomatic tension escalates
Defence Redefined
Published on 08/11/2021 at 16:30 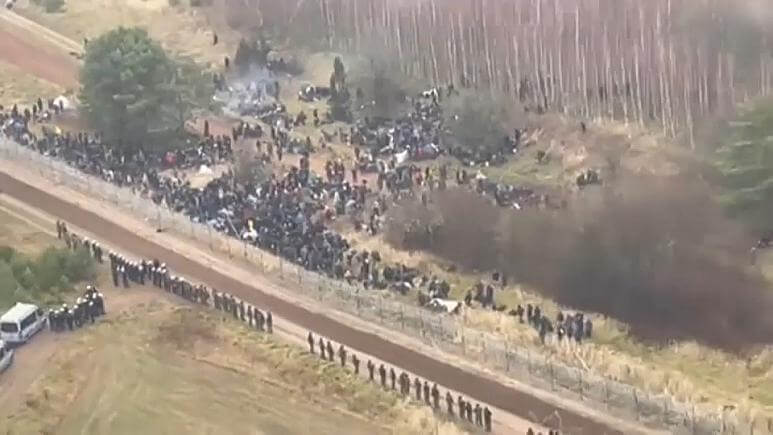 Today Polish authorities accused Belarus of trying to provoke a serious incident, as they posted videos on social media with hundreds of immigrants heading to the Polish border.

At the same time, Lithuania announced that it was moving troops to its border with Belarus while considering a state of emergency on the Belarusian border.

In a video posted on Twitter by the Belarusian opposition NEXTA, immigrants holding backpacks and wearing winter clothes are seen walking on the shoulder. Other videos show large groups of immigrants sitting on the street, accompanied by armed men dressed in khaki.

“Belarus wants to provoke a serious incident, preferably with shootings and casualties. According to press reports, they are preparing a major challenge near Kuznica Bialostotska, which will be an attempt at mass border crossings,” Polish Deputy Foreign Minister Piort Wawrzyk told the Polish state radio station.

“Very worrying information from the border. A large group of immigrants has gathered in Belarus, near the border with Poland. They are heading to the border of the Republic of Poland. They will try to enter Poland en masse,” Stanislav Zarin, head of the national security service of the Prime Minister’s office, said on Twitter.

Deputy Interior Minister, Maciej Vasik, posted on Twitter that “the Polish authorities are ready for any scenario.”

For her part, Lithuanian Interior Minister, Agne Milotet, stressed that her country is moving troops to the border with Belarus to prepare for a possible influx of immigrants.

Also read: Islamist terrorism | The revival of the Islamist threat

At the same time, the Lithuanian government will consider imposing a state of emergency on the border with Belarus, she explained during a press conference. Lithuanian authorities have refused to specify how many troops will be stationed at the border or the exact locations where they will be deployed, citing security reasons.

The EU accuses Belarus of encouraging thousands of immigrants from the Middle East and Africa to enter its territory, using them to avenge sanctions in Minsk for human rights abuses. The EU, the US, and Britain have imposed sanctions on Belarus after President Alexander Lukashenko of Belarus violently suppressed mass protests following last year’s controversial election.

Mr. Lukashenko has repeatedly denied the allegations in a statement issued Friday stating similar, baseless allegations concerning Russia’s foreign policy have been made more than once.

Belarus’ border guard service has issued a statement confirming that a large group of immigrants is moving along the highway to the Polish border, noting that Warsaw is adopting an “inhumane attitude”. Charities complain about the inhumane conditions faced by immigrants trying to cross the border into Belarus, in extremely low temperatures, with shortages of food, water and without any medical care.

According to the Polish authorities, at least seven immigrants have been found dead on the Polish side of the border, while unconfirmed information speaks of other dead in Belarus. Humanitarian organizations accuse the ruling nationalist Law and Justice Party (PiS) of violating immigrants’ right to asylum by sending them back to Belarus instead of accepting their applications. Poland insists its actions are legal.

Polish Prime Minister Matthew Morawiecki stressed on Facebook that “the Polish border is not just a line on the map. The borders are sacred, Polish blood has been shed for them!”