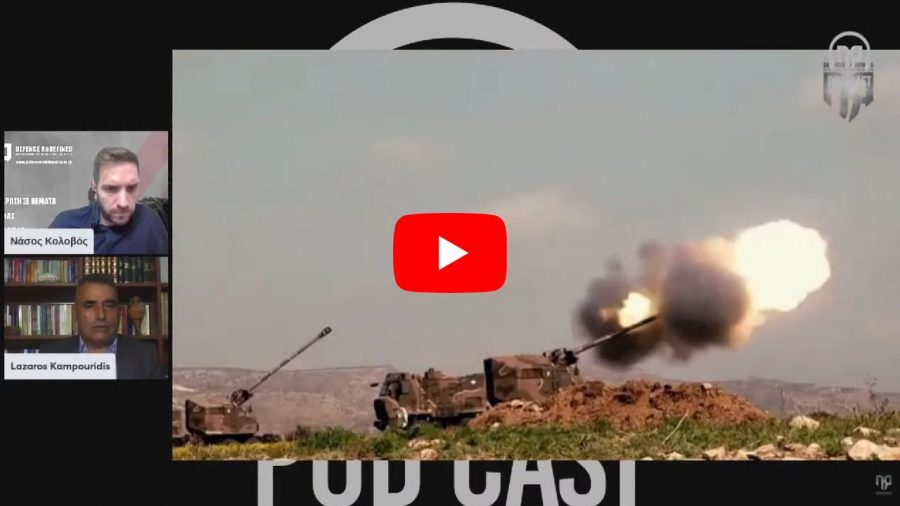 Lazaros Kambouridis served in units on the islands and on Evros, but also as a Defence Attaché in Ankara. His positions on the defence of the Greek borders and internal developments in Turkey were particularly apt.

War in Ukraine and operational conclusions

With regard to the war in Ukraine, Mr. Kambouridis stated that the Russian ground forces seemed unprepared to carry out land occupation operations, as the Objective was not primarily the occupation of land, but political change in the country. He also referred to the information gap witnessed in the Russian Forces as well as the role of mercenary forces and conscription. According to Mr. Kambouridis, the same mistake is being made by Turkey as it invests more in special forces units for missions in other countries, whereas the same preparation for large ground operations is not observed.

The defence of the Greek islands, Evros and the Marders

Regarding the Marder, he said that based on his experience on Evros and the islands, what the islands need is the rapid movement of forces, an area in which the BMP1 faced a serious problem, while accidents also occurred. The speed and reliability of the vehicle is more significant than the armament, while the Marder is more reliable. The islands have been positively reinforced with the M1117s which are better for reconnaissance missions than their predecessors. According to Mr. Kambouridis, the transport of the Marder to Evros is also a correct step, noting that the Infantry Fighting Vehicles (IFVs) that participate in armored formations must keep up in terms of speed.

Turkey and the Kurds

Regarding the recent bombing in Istanbul, he said that the evidence so far does not show the PKK as the perpetrator. Turkey appeared as a victim of terrorism and used it as an excuse for bombing Kurdish targets. Drones were used without permission to enter Syrian airspace, while F-16s bombarded Turkish airspace, indicating no Russian consent. Mr. Kambouridis added that the fact that the YPG Kurdish forces took over operations against ISIS ultimately did not entail increased pressure on Turkey from the West. He added, however, that Greece, as a member-state of NATO, adopts a different approach. He also added that the bomb attack is likely to be a provocation by Turkish circles and organizations.

With regard to Greek-Turkish relations, Mr. Kambouridis emphasized that the Turkish doctrine has changed from deterrent to a pre-emptive. He referred to the “red book”, which is the core of Turkey’s high strategy, updated every 5 years. Since 2018, the Turkish doctrine has turned into an aggressive pre-emptive strike doctrine. Erdogan, after Iraq and Syria, wants to control half of the Aegean. Since Greece does not back down, Erdogan is seeking a small conflict to blame Greece. He also sounded the alarm about the possibility of provocation, stressing that uninhabited rocky islands will be a target. With the use of frigates, it is possible to seek – without the use of arms – to stop the military supplies of Greek islands in order to lure Greece into an incident.

The Turkish secret services and drones

As for the Turkish secret services (MIT), he said that they hired officers of the special operations forces (Bordo Bereli) who act as MIT officers to kill PKK officials using drones. MIT also has an upgraded contact and monitoring system in both Greece and Europe. Mr. Kambouridis emphasized again the risk of provocation and therefore stated that even every citizen must report anything suspicious.

On Turkish drones, the Lieutenant General stated that Turkey has made great progress in the field with several exports. Drones have supported Turkey’s pre-emptive strike doctrine in Iraq and Syria as well as in the Aegean. Regarding Turkish missiles, he stated that although the Turkish industry is progressing, Erdogan, for pre-election reasons, often presents non-existent weapon systems, such as the Turkish fighter that won’t be ready in 2023.

The equipment needs of the Greek Army

In terms of the needs of the Army, Mr. Kambouridis mentioned the priority given to IFVs and transport supply as the speed of movement is primary. He also referred to the need to acquire transport and attack helicopters, maintenance and defence against unmanned aerial vehicles. Missile systems on the islands are also a very important asset for deterrence purposes. However, Mr. Kambouridis estimates that landing action will be carried out by small boats of special forces. He also added that the armored formations in Evros give offensive possibilities to the Greek side.

Regarding the doctrine of the unified defence area of ​​Greece and Cyprus, Mr. Kambouridis stated that the Turkish plans include actions in Greece and Cyprus, therefore defence must be unified. Kastellorizo ​​and Crete play a key role, while Cyprus stated that it must procure weapon systems, based on the lifting of the American embargo, to prevent the landing of the Turkish 11th Army Corps, anti-aircraft systems and against unmanned aircraft. The Lieutenant General emphasized that Greece and Cyprus are two states, but one nation.

Regarding the Turkish coup in 2016, a period during which Mr. Kambouridis served as a Defence Attache in Ankara, he said that there has already been discussion that something would be done. He said that the scenario is not clear that the coup was set up by Erdogan, but he himself knew how it would happen so he was ready.

The role of reservists

With regard to reservists, Mr. Kambouridis, who was also the Director of the 1st Branch of the Hellenic Army General Staff, stated that even though the Turks have reduced their times with the fleet of tank carriers on the road and rail network, it takes them two weeks to move forces to Evros or longer if the forces are transferred from Syria. He emphasized that all times related to the call-up, training and movement of reservists to their positions must be reduced because Greece relies on reservists. The one under attack has an advantage in terms of time.

Organization of Turkish States and Turkey as an energy hub

Regarding the organization of Turkish states, Mr. Kambouridis said that Turkey aspires to become an energy hub through these states. Combined with Turkey’s Eurasian orientation, pan-Turkism and pan-Turanism, Erdogan is attempting to completely destabilize Kemal and emerge as the “father of the Turks”. This specific issue is particularly important as it also concerns states with which Turkey wishes to maintain good relations, such as Russia and China.

Also read: Podcast S2E8 | Armaments race in Greece and Cyprus – The vision of 2030