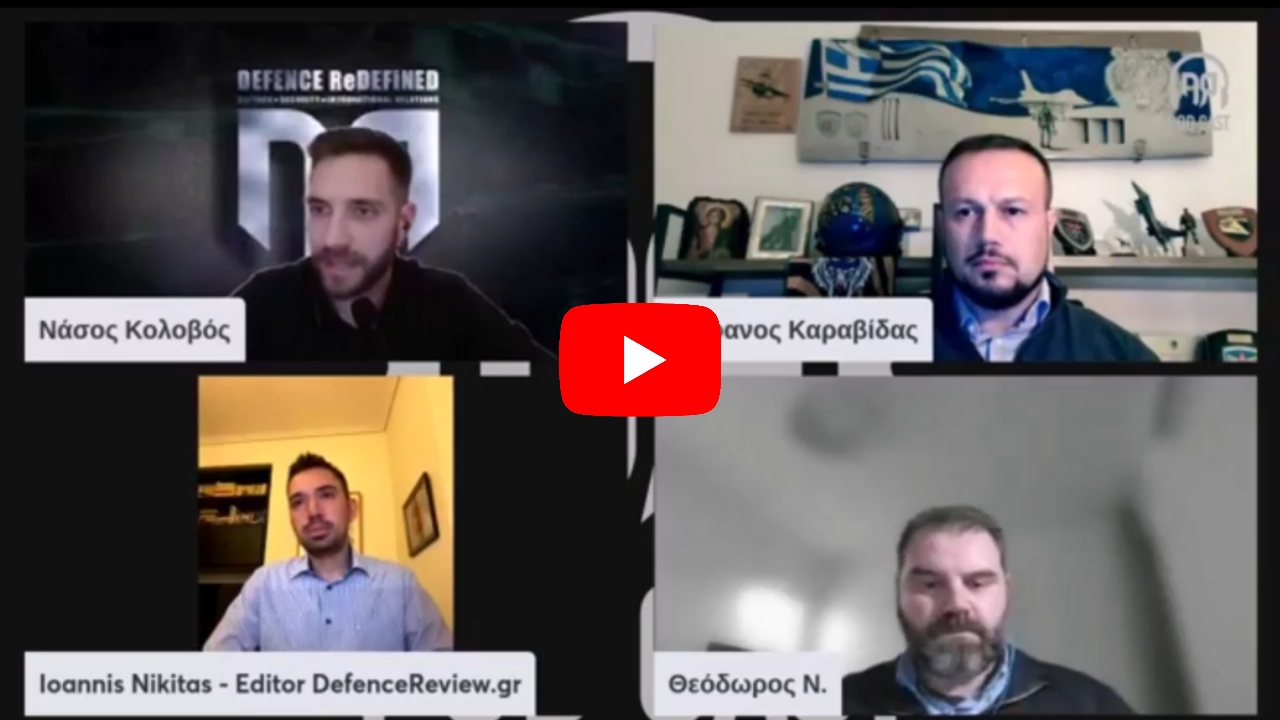 In this episode, the topics of discussion were, among others, the armament programs of Greece and Cyprus, geopolitical developments, new technologies, the confrontation of threats in all fields, and the Armed Forces of 2030.

Mr. Karavidas opened the discussion by firstly referring to the main characteristics of the 4.5 generation Rafale F3R aircraft and its capabilities, saying that the experience of the Hellenic Air Force (HAF) with this aircraft is mature due to the fact that many exercises, which the HAF participated in, included the aircraft in question, which in turn makes it a familiar platform for Greek pilots. In fact, he added that the decision to procure this fighter jet was good news despite the fact that there was no relevant proposal from the relevant staff, while he stressed that at a tactical level this fighter constitutes a game-changer.

Mr. Nikitas’s first comment concerned the equipment of the Hellenic Navy both in terms of the decision to procure 3 FDIs and the proposals for the candidate corvettes. Mr. Nikitas said that the acquisition of these ships by the Hellenic Navy is a “historic event” safeguarding a permanent long-standing operational requirement, namely area air defence, while he added that even though the FDI is not primarily a pure area air defence frigate, it enables the Hellenic Navy to operate in the high seas of the Eastern Mediterranean owing to a load of weapons, sensors, radar and the tactical system it carries. In his opinion, the Navy is making a leap into the future, and as to the corvettes, he said that the Gowind ones are reasonably preferred for uniformity reasons.

Mr. Nikolovgenis spoke about the equipment of the Army General Staff and about what must be done in the future, pointing out that the need for renewal of the Army equipment is immense so a plan for the next 15 years must be drawn up, which must be implemented from companies of the domestic defence industry. He also stressed that the modernization of tanks in terms of their survivability is an immediate priority in view of a large number of Turkey’s UAVs and the potential danger for Greek armored vehicles.

After the initial position of the host of the podcast Nasos Kolovos regarding the armament program of the National Guard, as has been analyzed many times in DEFENCE ReDEFiNED, Mr. Nikolovgenis’ position was heard. Mr. Nikolovgenis believes that the National Guard has made several targeted steps in the armaments sector in the last three years, which in turn explains Turkey’s decision to upgrade military installations in the occupied territories. He added that there are many weapon systems that need to be modernized, while it is of utmost importance for the Hellenic National Defence General Staff and the National Guard General Staff to have common tactics not only in a period of operations but beyond that too.

Responding to a question, Mr. Karavidas pointed out that a Unified Defence Doctrine is not feasible, since there are no joint exercises between Greece and Cyprus, as exercises are carried out only with friendly countries. In other words, the guest said that everyone is present in Cyprus except Greece which has a direct interest and this must change with the implementation and application of joint plans. On another note, he stressed that it is important that the next air defence system of the National Guard ought to have anti-missile capabilities in addition to anti-aircraft ones, in order for the island to “host” an air force, which it must acquire, in a safe environment, as for him the establishment of an air force in Turkey’s area of interest is clearly an advantage.

Mr. Nikitas, for his part, considers that the acquisition of weapon systems by the Republic of Cyprus is vital, which can hit the enemy’s centers, mainly by giving emphasis to the artillery capabilities (and especially to the missile systems), and at the same time, strengthen target acquisition capabilities.

The 2030 Vision for the Armed Forces

The views of the guests on how they would like to see the Armed Forces in 2030 were quite interesting.

Mr. Nikitas stated that very brave economic decisions are required, while their precondition must be a cross-party consensus. In particular, he stressed the needs of the Hellenic Navy, which require a complete overhaul, as it is based on aging units, emphasizing, in fact, that the Navy does not consist of frigates alone, but also of support ships and the submarine fleet. Overall, he argued in favor of a long-term armaments program with the involvement of the Greek defence industry, which takes into account all parameters – whether strategic or operational – which are observed consistently and prudently by all political forces.

Mr. Nikolovgenis commented that the political leadership must first decide on its vision of Greece in 2030 and the result of this decision must be the respective armaments. According to him, Greece must move in two axes: the first axis is the implementation of important long-term armament programs (aircraft, ships, etc.), where the domestic defence industry cannot be involved, and the second axis is the renaissance of “legacy” systems that can play a role in the modern battlefield with great involvement of the domestic defence industry.

Finally, Mr. Karavidas spoke of a vision, while he sees the future Hellenic Air Force with 150 F-16 aircraft with centric-network capabilities and armed with smart weapons and missiles, with investments in Airborne Warning And Control Systems (AWACS), with 50 Rafale aircraft and availability of necessary means.

See the whole interesting discussion on our YouTube channel below: