Pictures from the handover ceremony of the Ministry of Defence | Photos 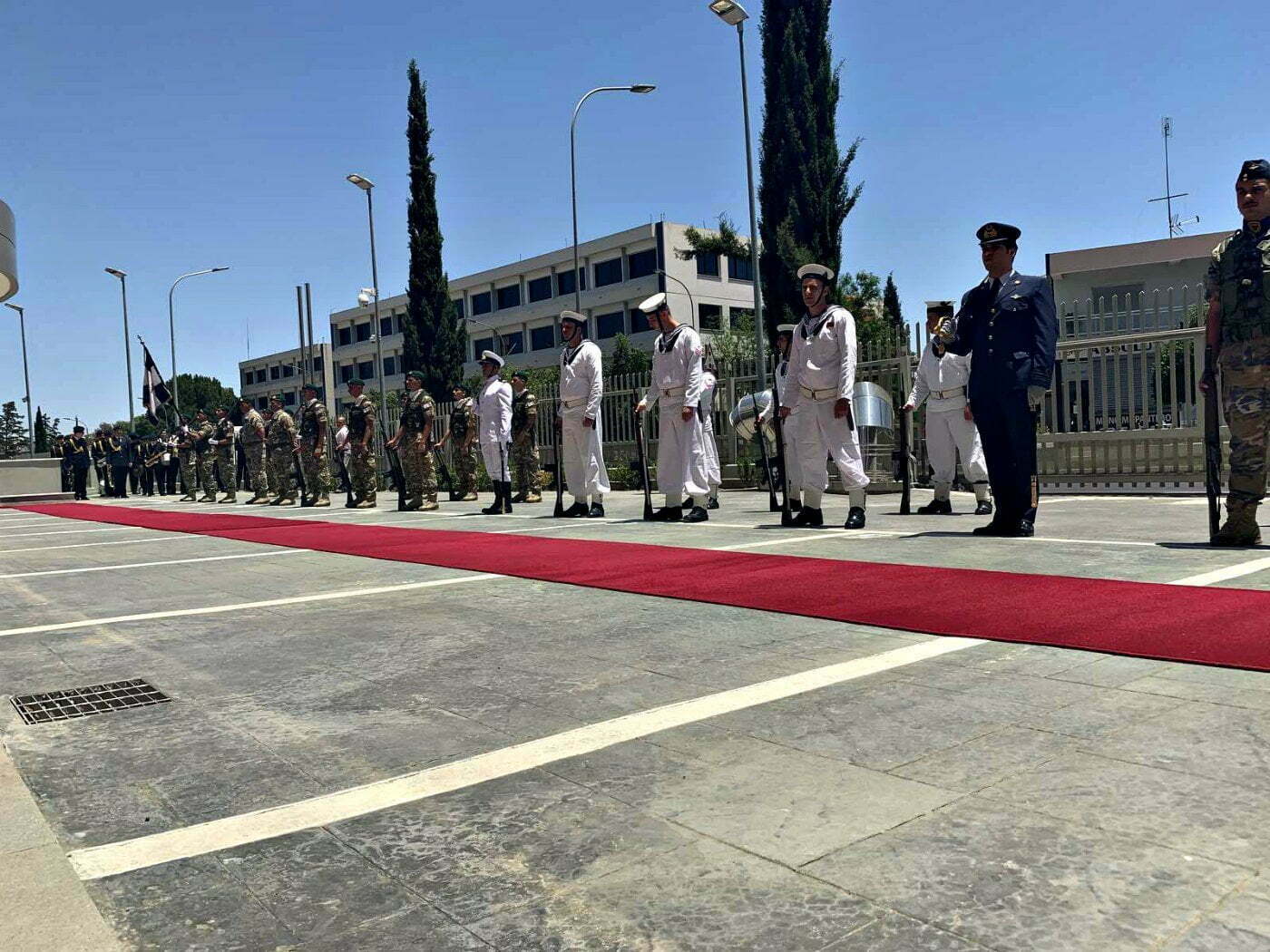 The ongoing Turkish provocation does not allow any room for complacency, outgoing Defence Minister Savvas Angelidis said, handing over the baton to the new Minister of Defence Charalambos Petridis. The latter in turn gave his word for hard work so as to respond to the love of people for the armed forces.

Addressing Mr. Petridis, he said that the challenges he has to face are many. “With your professionalism and love for our long-suffering island, and with the most valuable thing you have – the political and military staff – I am sure that your work will be crowned with absolute success for the good of our country,” he said. “Rest assured I will be a supporter and companion in your endeavor.”

Also read: Appointments of George Savvides and Savvas Angelides to the positions of State and Deputy Attorney General

“At this point, I would like to thank the President and the members of the Parliamentary Defence Committee, as well as all his Members of Parliament. We had very good cooperation, mutual respect and mutual understanding. We have proved in practice that defence is a national affair,” he said.

“It would be my omission not to thank the friend and Minister of National Defence of Greece, Nikos Panagiotopoulos, but also the outgoing ministers, Panos Kammenos and Evangelos Apostolakis. They have constantly supported the armed forces of Cyprus,” he noted.

“It’s been two and a half years. Two and a half years of enormous efforts by all members of staff from various positions, at a difficult juncture, a period of challenges in the EEZ, but also in the territory of the Republic of Cyprus, during which the staff has demonstrated and continues to demonstrate military professionalism and a high sense of responsibility,” he said. He also added that he hands over his position having now acquired his own view of the military family. “Your particular way of thinking, your method, your discipline, but especially your patriotism, are the preconditions for all of us, the citizens of the Republic of Cyprus, to feel safe,” he said.

He said that from the first moment he took over, he called on all staff for teamwork and cooperation with the ultimate goal of further upgrading and evolving the National Guard, its extroversion, as well as ensuring the Interests, Defence and Security of the Republic. “It simply came to our notice then. Whatever work we produced was not the work of one but of the whole. A strong ensemble with partners from both the Ministry and the GEEF. It is a common struggle for the promotion of the diplomatic role of the Ministry, but also for the operational readiness and capability of the National Guard,” he said.

On his part, the new Minister stressed that everyone is well aware of the current situation and the critical circumstances. “Our struggle for liberation from occupation is now taking place in a highly fluid geopolitical environment with new, escalating challenges,” he said, noting that everyone must work for this purpose with all their might, calmly and resolutely, with thought and vigor, with unity and national reconciliation. He assured that he will be in full coordination with the entire political leadership and of course with Greece.

Referring to his predecessor, he said that in his day, Cyprus had essentially upgraded its position and role, not only because it had strengthened the Armed Forces, but also because it had designed and implemented multidimensional defence alliances and synergies. “Long-term alliances with a number of third countries, neighboring and non-neighboring, that create another valuable basis against Turkish provocation,” he said.

Also read: Charalambos Petridis is the new Minister of Defence

Mr. Petridis gave his word that with hard work he will respond to the love and trust with which people surround the Armed Forces. “I promise that, with all the strength of my soul, I will honor the oath I made for a homeland that is free, peaceful and secure from one end to the other for every citizen. Respectively, I wish everyone good luck,” he said and wished Savvas Angelidis every success in his new duties as Deputy Attorney General.

After the handover ceremony, the Chief of the National Guard, Lieutenant General Democritus Zervakis, presented Mr. Angelidis with the emblem of the National Guard, telling him that in the 2.5 years of his presence at the Ministry, he set priorities and achieved a lot. He also assured the new Minister that the NG is ready to fulfill its role and contribute to the realization of its goals.