INTERNATIONAL RELATIONS
N. Dendias | Greek letter to The Hague on war crimes in Mariupol
Defence Redefined
Published on 18/04/2022 at 09:00 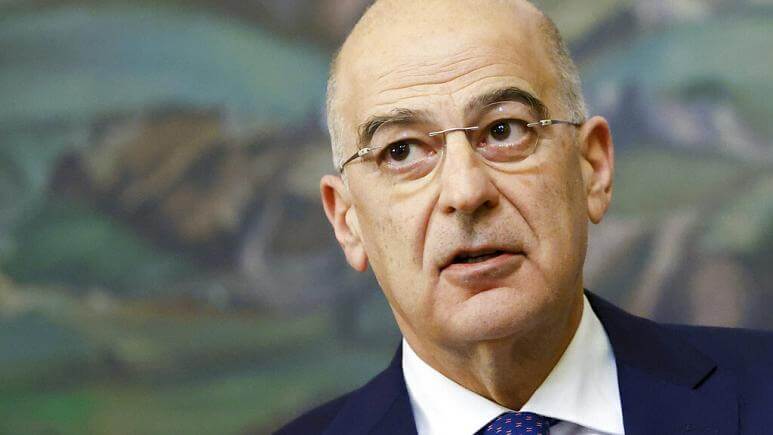 Foreign Minister, Nikos Dendias, has sent a letter to the Attorney General of the International Criminal Court asking it to investigate the crimes committed in Mariupol and in the villages of Sartenae and Volnovka, as he states in an interview with the newspaper “Kathimerini”.

“We will continue to raise the issue of Mariupol in all fora and to emphasize that the commission of war crimes should be thoroughly investigated,” he said.

As he underlines, “for Greece, the protection of civilians and the provision of humanitarian aid to the Greek community in Ukraine is a top priority, especially in the Black Sea coastal cities, such as Mariupol and Odessa, where Greeks have lived for centuries,” recalling his recent visit to Odessa.

Unfortunately, he says, as far as Mariupol is concerned, “the situation is tragic and the city has virtually ceased to exist,” adding that “we are not allowed to go there so that we do not see for ourselves the magnitude of the disaster.”

The Foreign Minister clarifies that “Greece will continue to support, as a fundamental principle, the territorial integrity and sovereignty of Ukraine” and emphasizes that despite the historical ties that our country has with Russia, “Greece had no choice”.

“It did what the principles it serves dictate, the principles of international law, the Charter of the United Nations: respect for the sovereignty, independence and territorial integrity of states,” he said, adding:

“Greece condemns any invasion in the first place. We would be inconsistent if, defending our positions e.g. in the Cyprus issue, we did not defend the same principles in every case. By its actions, Russia, unfortunately, did not give us a choice. The level of Greek-Russian relations is the result of the choices of the Russian government, not of our country,” he notes.

The Foreign Minister states that “no one can predict the next moves of the Russian side”, while “in theory, even a possible attack in Odessa could be the trigger for the expansion of hostilities in other countries.”

Regarding the application of Sweden and Finland to join NATO, he states that any relevant decision is a sovereign choice of these countries. Both countries are our EU partners, they contribute to European security and, of course, if they choose to join NATO, Greece has no reason to oppose it in the first place.”

He reminds that Greece, in contrast to Turkey, which does not allow the rapprochement of Austria and Cyprus with NATO, does not use its position in NATO to promote selfish interests.

Asked about Turkey’s stance on the war in Ukraine, which has been described as “ingeniously neutral”, Mr. Dendias clarified that “Greek foreign policy cannot and should not be a bad example of the Turkish one”.

“Historically, Turkey has been trying to play the role of an ‘intermediate’ force,” he said. “On the contrary, Greece has managed to be an integral part of a specific political, cultural, and value space, much more advanced. This has been our great historical success. If we try to imitate Turkey, we would face problems of unreliability without benefits.”

He also notes that the Russian invasion of Ukraine found against it all the democracies that imposed sanctions.

“Practices that were accepted in the 19th or even part of the 20th century find themselves facing the solid front of the Republics,” he points out, adding: “the threat or use of force is morally delegitimized. They are no longer seen as merely an annoying contradiction, but as what they really are: a serious threat to international peace and security.”

Regarding the escalation of Turkish provocations in the Aegean, the Foreign Minister points out that Greece has protested strongly to the Turkish side, both in Athens and in Ankara, emphasizing that any violation of national sovereignty and territorial integrity is a flagrant violation of the International Law.