Myanmar protests against the coup for the fifth day – VIDEO
Defence Redefined
Published on 10/02/2021 at 11:34 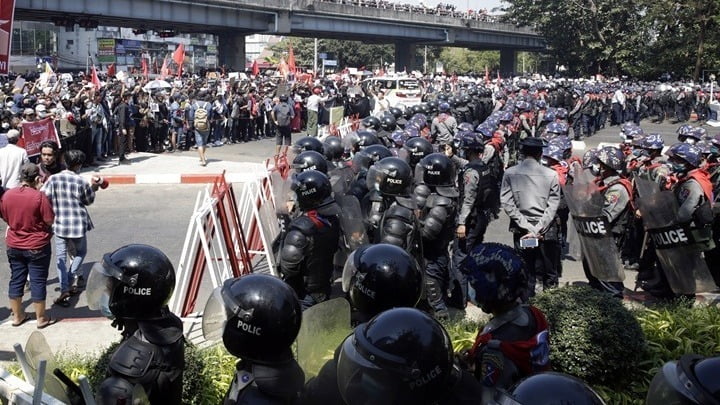 The people of Myanmar are out on the streets for the fifth consecutive day, after the army’s night raid at the headquarters of Aung San Suu Kyi, an action that shows the determination of the coup in response to calls for the restoration of democracy.

Hundreds of people gathered on Wednesday afternoon (local time) in the center of Rangoon, the financial capital of Myanmar, after the repression exceeded new limits yesterday. Demonstrations were also underway in Naipidau, the country’s capital.

According to the National League for Democracy (NLD), the military carried out a third raid on the party’s offices in Rangoon yesterday.

“The military dictatorship invaded and destroyed the NLD headquarters at around 9.30pm,” the party posted on its Facebook page, as protests broke out in several cities, with security forces using plastic bullets and water pumps against the crowd.

The UN yesterday condemned the “disproportionate” and “unacceptable” use of force by the military.

Woman shot at the protests

UN special envoy for Myanmar, Tom Andrews, condemned the use of force and assured that the police shot and wounded a young woman in Naipadu. Images of the incident were shared on social media.

“They can shoot a young woman, but they cannot steal the hope and determination of a people,” Andrews wrote yesterday. “People stand in solidarity with the protesters in Myanmar.”

According to a Naipadu hospital doctor, the young woman named Mia Tue Tue Kine is being treated “in the intensive care unit and her breathing is mechanically supported, she remains in a coma” until this morning.

Another doctor had pointed out yesterday that the military was shooting with real bullets, judging by the injuries suffered by two young men who are being treated in critical condition. “We believe these are real bullets,” said one doctor.

Authorities opposed the protest with all available police forces, special services and the army.

Despite the bans, thousands of protesters continue to be on the streets of cities across the country demanding the release of those arrested, the end of dictatorship and the abolition of the 2008 constitution, which is very favorable to the military.

Su Chi is “in good health”

Army Chief Min Aung Hlaing spoke for the first time since the coup on Monday night on the army’s television network, Myawaddy TV.

He pledged to “hold free and fair elections” as soon as the one-year state of emergency declared in the country expired and promised a military regime “different” from the previous ones.

The February 1 coup ended a decade-long democratic bracket in Myanmar.

The military is challenging the November parliamentary elections, in which the NLD won a landslide victory, although international observers found no serious problems.

In fact, the generals fear that their influence will diminish after the victory of Suu Kyi, who wanted to amend the Constitution.

The former leader is “in good health” and remains under house arrest in Naipadu, according to her party.

The US, EU, Britain and many other countries have condemned the coup.

The UN Human Rights Council will hold an emergency meeting on Friday to discuss the facts, while the Security Council has called for the release of those arrested.