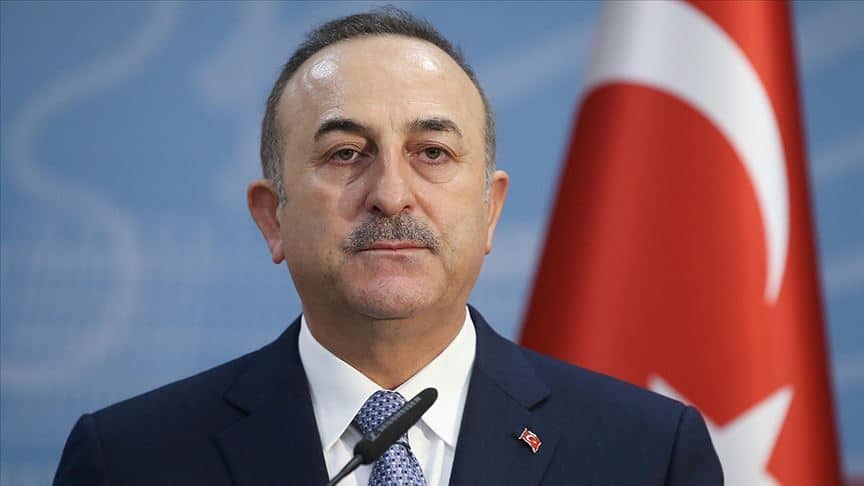 Messages on the Cyprus issue, Varosi, the relationship between the two communities in Cyprus, the gas, and the Greek-Turkish issues were sent by Mevlut Çavuşoglu, who illegally visited the occupied areas.

After the meeting, Mr. Çavuşoglu and Mr. Tatar gave a joint interview, in which they reiterated their well-known positions on the Cyprus issue, the gas issue, and Varosi. The Turkish Foreign Minister, answering a question from a Turkish journalist, also referred to the Greek-Turkish issue.

Referring to the Cyprus issue, Mevlüt Çavuşoglu said that “in order for the new negotiation process to begin and be successful, it is clear that the sovereign equality and equal status of Turkish-Cypriot people must be guaranteed. These are the “rights” (of the Turkish-Cypriots) which were registered in 1960 but were usurped later (by the Greek-Cypriots) and cannot be disputed. This is because such a thing would mean that the identity and the Turkish-Cypriot “people” is underestimated. Negotiations are possible between equals (equal sides). Otherwise, they do not make sense. We have experienced this for 54 years. We do not have another 50 years to lose.”

Referring to the joint effort of the Turkish-Turkish-Cypriot leadership to promote the two-state solution, Mr. Çavuşoglu called on the EU, which in his view expresses the positions of the Greek-Cypriot side, to recognize “the will of Turkish-Cypriots”, while regarding the Confidence Building Measures (CBM), Mr. Çavuşoglu claimed that the new proposal of the Greek-Cypriot side tries to mislead the international community and that this is nothing but the re-promotion of old ideas.

According to him, the Greek-Cypriot side is promoting the new CBM by reacting to the developments in Varosi. Referring to Varosi, Mr. Çavuşoglu also said the following: “The Greek-Cypriot side wants to take Varosi back. Here I must repeat that Varosi is the territory of the “TRNC”. The measures taken in the context of the opening of Varosi do not violate international law and are for the benefit of the “peoples” of the island.

“The Greek-Cypriot side should not try in vain to put the issue on the agenda of the European Union. (Rather) it should evaluate the opportunities. For example, it should not jokingly claim that the sunbed placed on the beach of Varosi is a threat to international security,” he said.

Also, Mr. Çavuşoglu announced that in the next period the Turkish-Cypriot side will submit its own proposals for the CBM.

Responding to a question from a Turkish journalist, the Turkish Foreign Minister added that “(the Greek-Cypriots) began to feel uncomfortable with the opening of Varosi. They are very concerned about the fact that the Greek-Cypriot people also want to use their property in Varosi. That’s the most natural right.” He also claimed that by promoting the CBM, the Greek-Cypriots are trying to get around the Turkish-Cypriot side.

On the issue of the Eastern Mediterranean, Mr. Çavuşoglu reiterated that the proposal of the Turkish-Cypriot side remains on the table.

Tatar, on his part, reiterated his well-known position on the “two-state solution”, claiming that the roots of this “solution” are in the founding agreements of 1960, a position which was repeated by the previous representatives of the Turkish-Cypriot side.

Mr. Tatar also referred to last year’s conference held in Geneva as well as to the CBM proposed by the Greek-Cypriot side, saying that the latter relates these measures to the opening of Turkish ports in the Republic of Cyprus and “the amendment of balance in the airspace (of Cyprus) to the detriment of the Turkish-Cypriots”.

With regard to Varosi, Mr. Tatar claimed that “(in the following period) the projects in the region will be gradually implemented. As was recently announced, to date 500,000 people have visited Varosi which has become an international destination. As we all know, the Turkish-Cypriots, (that is) EVKAF, have historical rights in the region. (At the same time) we act in accordance with international law.

With regard to the real estate committee approved by the European Court of Human Rights, we must do what is necessary to fulfill the rights of former residents. I would like to point out that despite the pressures of the Greek-Cypriot administration (at the moment) there are 459 applications. I hope that these applications will increase over time.”