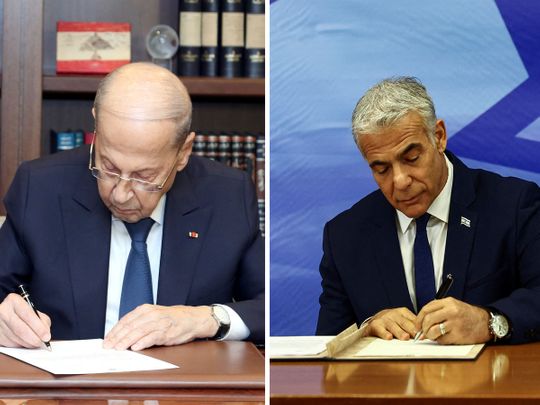 Lebanon and Israel, two neighboring countries officially at war, signed an agreement yesterday that delimits their maritime borders after months of negotiations under the auspices of the United States.

The agreement, which guarantees the distribution of offshore natural gas fields in the eastern Mediterranean, was signed in the afternoon at the headquarters of the UN Interim Force in Lebanon in the presence of the US mediator, Amos Hochstein, and the UN Special Coordinator in Lebanon, Joanna Vroneka.

The Israeli government approved the historic deal, while Israeli Prime Minister, Yair Lapid, said that the deal was Beirut’s “de facto recognition” of the Jewish state.

Already, the President of Lebanon, Michel Aoun, has signed the letter of ratification of the agreement. US President, Joe Biden, hailed the achievement of the “historic” agreement, stressing that it took a lot of courage for the sides to commit and bring it to fruition.

The agreement to delimit the maritime borders will take the form of an exchange of letters, one between Lebanon and the US and another between Israel and the US, explained the spokesman for the UN Secretary-General, Stefan Dujarric.

Lebanon refuses to meet with the Israeli delegation or to sign the same text since the two countries are at war.

The agreement, which will allow the two countries to exploit natural gas fields in the eastern Mediterranean, was concluded thanks to years of US mediation.

Under the agreement, the Karish field is entirely in Israeli waters. Lebanon, for its part, will have full exploitation rights to the Cana field located in the northeast and a part of which is within Israel’s territorial waters. But Israel will be compensated by Cana’s operating company for its rights to potential deposits, according to the text.

Without even waiting for the signature, the energy group Energean already started the production of natural gas at the Karish offshore field the day before yesterday. The Israeli government on Tuesday gave the company the final green light to start exploiting the field.

Lebanon, mired in an unprecedented economic crisis, has for its part asked TotalEnergies to quickly begin exploration work at the Cana field.

The deal could not be signed without the approval of Lebanon’s Shiite Hezbollah group, which had threatened over the summer to attack Israel if it began drilling the Karish field before an agreement was reached.