NEWS
Greece – South Korea | Signing of Memorandum of Understanding between the Ministry of National Defence and the Agency for Defence Development of the Republic of Korea
Defence Redefined
Published on 07/09/2022 at 11:00 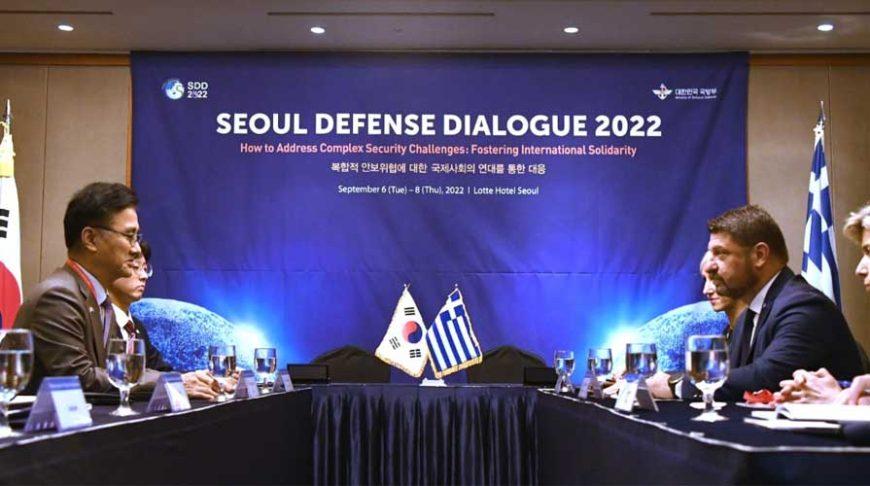 Deputy Minister of National Defence, Mr. Nikolaos Hardalias, and Minister of Defence of the Republic of Korea, Mr. Donghwan Eom, have signed a Memorandum of Understanding in Seoul between the Ministry of National Defence and the Agency for Defence Development. The Memorandum provides for the cooperation between the two countries in terms of the acquisition of mutual benefits in the Defence Industry and Logistics.

More specifically, the two Parties will explore ways in which to strengthen the defence cooperation between them in the following areas:

After the signing of the Memorandum, a bilateral meeting was held in a friendly atmosphere between Mr. Hardalias and Mr. Eom, during which the high level of trust and common will were underlined, so that the countries promote and strengthen their bilateral cooperation both in the defence sector and in areas of common interest.

Continuing his bilateral contacts, the Deputy Minister of National Defence held a meeting with the Assistant Undersecretary for Support and Defence Industries of the Ministry of Defence of the United Arab Emirates, Major General Dr. Mubarak Saeed Ghafan Al Jabri.

In a cordial atmosphere, the strong ties of friendship between the two countries were confirmed, issues of mutual interest were discussed with a focus on the prospects for further deepening the bilateral military cooperation, while views were exchanged on current regional and international developments as well as their impact on global security and stability.

In addition, the Deputy Minister of National Defence visited the Korean War Museum, where he laid a wreath at the wall of remembrance dedicated to the Greek participation in the Korean War, paying tribute to the 196 fallen Greek heroes.

Finally, Mr. Hardalias attended the official dinner hosted by the first Deputy Director of the National Security Office of the Republic of Korea, Mr. Tae-hyo Kim, for the heads of national delegations that will participate in the International Conference of Deputy Ministers of National Defence “Seoul Defence Dialogue 2022”.