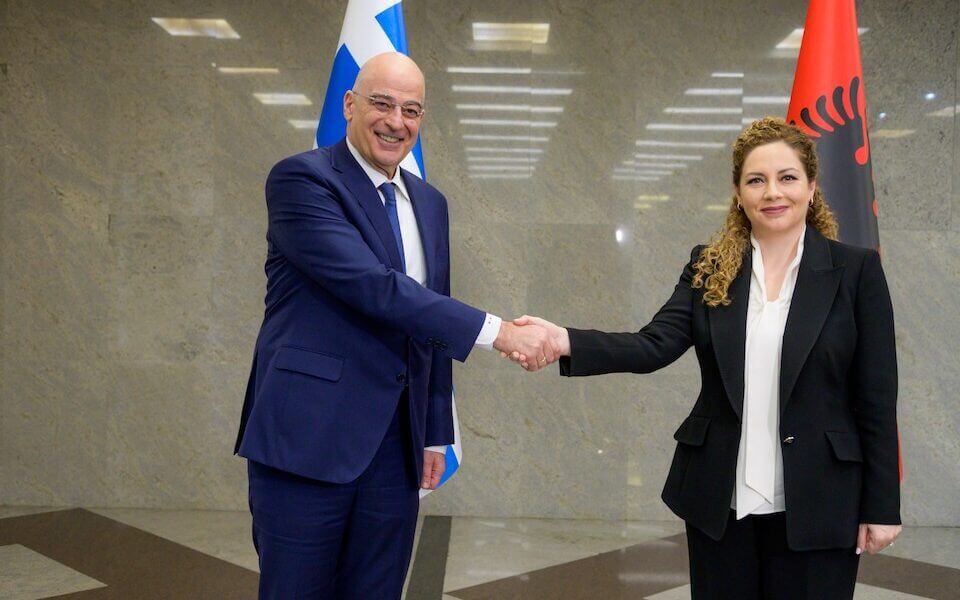 Greek Foreign Minister, Nikos Dendias, referred to the “completion of the procedure for the referral of the issue of the delimitation of the EEZ and the continental shelf to the Hague,” after a meeting with his Albanian counterpart, Olta Xhaçka, yesterday in Tirana. Mr. Dendias underlined that this is a process of “great importance” not only for the two countries directly involved, but also because of the messages sent through it.

“The completion of this process is of great importance to us. Both countries want to resolve their differences on the basis of International Law, and in particular the Law of the Sea, UNCLOS,” said the Greek Foreign Minister and continued by emphasizing “that this sends a very important message to all countries: that this is the right, the only, the appropriate way to resolve disputes.”

“We agreed on how to speed up to complete the technical part, so that we can submit the joint statement to the International Court of Justice in The Hague,” clarified Mr. Dendias.

The Greek Foreign Minister also referred to the “law on war”, the maintenance of which is an anachronism and should be abolished, as he said, noting that both sides must work so that the internal procedures for its abolition are completed as soon as possible.

Tirana is the first stop on the Greek Foreign Minister’s tour of the Western Balkans ahead of the Southeast European Cooperation Process Summit to be held in Thessaloniki two weeks from now.

It should be noted that yesterday the Minister of Culture, Lina Mendoni, arrived in Tirana in order to participate in the Greek Cultural Week.

The Greek Foreign Minister had earlier contacts with the Archbishop of Tirana, Durres, and All Albania Anastasios and with members of the Greek national minority from Heimarra, while later yesterday he was to meet with the Albanian Prime Minister, Eddy Rama, to whom he would give the Prime Minister Mitsotakis’ regards, as he stated. At the center of the discussions of Mr. Rama and Mr. Dendias were bilateral relations, Albania’s European perspective, and regional developments.

Also read: Albania to be Turkey’s next client for Bayraktar TB2

The Albanian Foreign Minister also tried to raise the Chams issue during her meeting with Nikos Dendias. The Greek Foreign Minister essentially “cut off” any such conversation both during their meeting and in the statements made during the press conference.

“Our bilateral relations have developed to such an extent that the maintenance of the “law of war” is an anachronism and should be abolished. Regarding this, I think we have agreed that we need to work on completing the internal procedures related to its abolition as soon as possible.

In any case, we consider that the Greek National Minority here in Albania, but also the Albanian community living and working in Greece is a bridge between our two countries. And that is why we should discuss and we did discuss issues that concern both groups, the Greek National Minority, but also the Albanian community living in Greece,” clearly stated the Greek Foreign Minister.