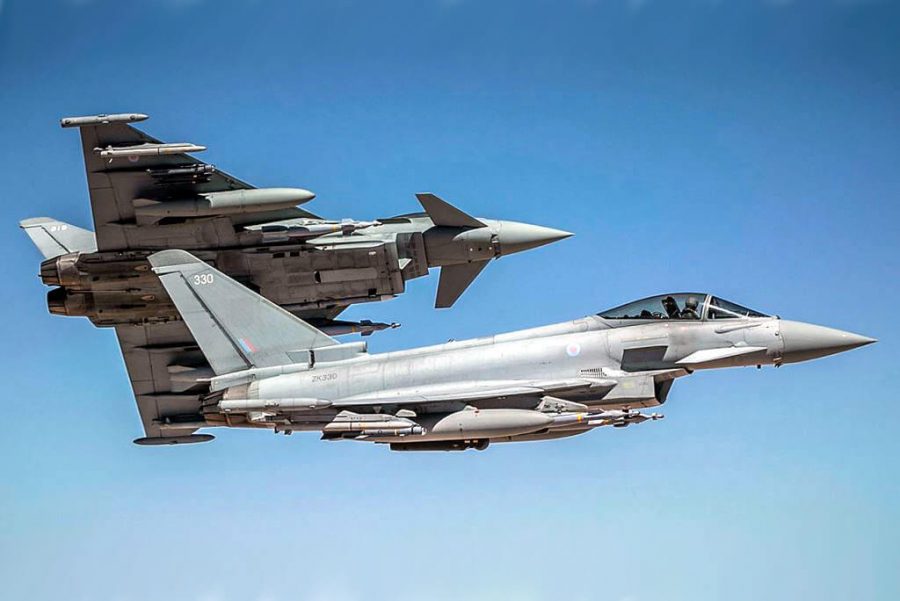 Four Typhoon fighter jets have reinforced the British Bases in Akrotiri region and will soon begin patrolling Eastern Europe due to the Ukraine crisis, as British forces intensify their presence in the area, according to a statement from the British Ministry of Defence.

The four Typhoons arrived in Cyprus on Monday night, contributing to a wider NATO presence in Eastern Europe, while a relevant video from their arrival on the island has been released.

As British Defence Secretary Ben Wallace enters into talks with NATO allies outlining his country’s position on the Ukraine crisis, Britain is doubling its military presence in Estonia and sending warships to the Eastern Mediterranean.

According to the announcement, troops and armored vehicles from the Royal Welsh combat wing will be sent to Estonia from Sennelager, Germany and from bases in the United Kingdom, where they are expected to be located next week, while Apache helicopters will soon arrive in the area for joint exercises in Eastern Europe.

The arrival of the four Typhoon fighters at the Akrotiri Bases, which will soon begin patrolling Eastern Europe with NATO allies, is also reported, along with the involvement of the warship HMS Trend in patrols in the Eastern Mediterranean and NATO allied forces from Canada, Italy, Spain and Turkey.

Furthermore, the HMS Diamond anti-aircraft missile ship is preparing to set sail to join the NATO force in the Eastern Mediterranean, 350 Marines of the “45 Commando” battalion have already arrived in Poland, while about a thousand people are on alert in Greater Britain for humanitarian aid, if necessary.

The British Minister of Foreign Affairs stated that Great Britain, together with its NATO allies, is deploying troops and equipment on land, sea and air to support European defence, in response to the strengthening of Russian military forces on the border with Ukraine. He reiterated that an invasion of Ukraine would have serious consequences for Russia and stressed that de-escalation and diplomacy are the only way out of this situation.