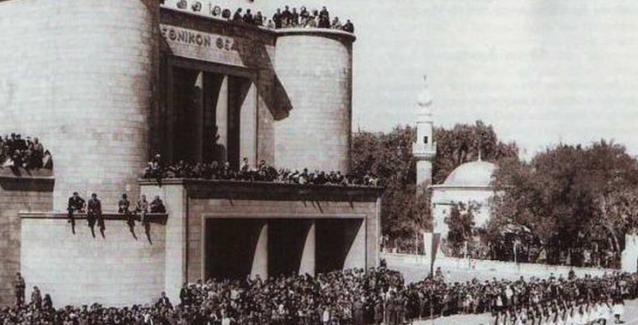 Since antiquity, the 14 islands which constitute the archipelago of the Dodecanese, were bound by the fortune of the Greek Nation. However, it was not until 1947 that they were integrated into the national body and the Greek state.

Due to their geographical location, the Dodecanese were raided by the Persians, Saracens, Venetians, Genoese, Crusaders and Turks (Seljuks and Ottomans). In 1309 they were occupied by Knights Hospitaller and remained under their occupation until 1522, when they were occupied by the Ottoman Turks. Upon the beginning of the national liberation struggle of 1821, the Dodecanese revolted, but in 1830, along with Samos, they were once again under the rule of the Ottoman Empire, in exchange for Euboia, which was integrated into the free Greek state.

Congratulatory poster for the union of the Dodecanese with Greece (Archive of the Council of Elders of Symi).

In 1912, when the Italians occupied the Dodecanese, the hopes of their inhabitants were revived that soon the islands would be integrated into the Greek state. Thus, with the Treaty of Sevres on August 10, 1920, the Dodecanese were ceded to Greece, with the exception of Rhodes, which would remain under Italian rule. However, the unfortunate outcome of the Asia Minor campaign gave the Italians the opportunity to retreat and with the rise of Mussolini they tried to eliminate them. However, after the capitulation of the Italians in 1943, the Dodecanese came under German rule and, following the surrender of Hitler’s Germany in May 1945, they became a colony of Great Britain.

This was the golden opportunity for the Dodecanese to integrate into the Greek state, which Greek diplomacy should not let go. It was a demand of the Greek people and a lot of Greek blood had been shed for the expulsion of the Germans from the Dodecanese. The issue would be finally resolved by the Peace Conference of the victorious powers of World War II, which would meet in Paris.

The then Prime Minister of Greece, Konstantinos Tsaldaris, said that he would put the acquisition of Northern Epirus and the Dodecanese, the settlement of the Greek-Bulgarian border on the negotiating table as national claims, while he intended to raise the issue of Cyprus to Great Britain. Of these four national claims, only the issue of the Dodecanese was successful, without any difficulties or complications.

Newspaper title of the time

The news about the integration of the Dodecanese in Greece was hailed with great enthusiasm, at a time when the country was in a civil war. The Peace Conference met in Paris from July 29 to October 11, 1946, where the Greek side also raised the issues of Northern Epirus and the settlement of the Greek-Bulgarian border, without success, as the US did not want to upset its ally, the Soviet Union, and the satellites of Albania and Bulgaria.

On February 10, 1947, the Peace Treaty with Italy was signed in Paris, according to which the Dodecanese were ceded to Greece, while Italy was obliged to compensate Greece with 105 million dollars. Due to the obsession of the Soviet side, the text provided that the islands would remain demilitarized, something that Turkey abusively invoked after 1974. From the Turkish interpretation of the text of the Greek-Italian treaty of 1947, along with the Italian-Turkish agreements of 1932, the issue of the “gray zones” raised by Ankara after the Imia Crisis in 1996 will also arise.

Rear Admiral Pericles Ioannidis signs the protocol of surrender of the Dodecanese.