During the Eurosatory 2022 International Defence and Security Exhibition in Paris, DEFENCE ReDEFiNED had the opportunity to talk to the Airbus H145M program manager, Mrs. Constance Pinsdorf. The helicopter showcased at Eurosatory was equipped with, among others, the Spike ER-2 anti-tank missiles made by the Israeli company Rafael.

In the video below (end of the article) you can watch a full presentation of the helicopter by Ms. Pinsdorf and a demonstration of, among others, the armament packages it can carry. It is noted that the helicopter in question is also of interest to the National Guard and a relevant article (from 2021) can be found at the link below. Today’s publications in the Cypriot press state that this helicopter has been finalized as National Guard’s choice to replace the Mi-35. Having contacted the Ministry of Defence, DEFENCE ReDEFiNED was informed that no comments will be made, until the signing of any agreement.

Eurosatory 2022 was the debut for the H145M with this armament configuration. Tests and evaluations of this version took place at a Romanian firing range in Cincu, in May this year with the participation of guests from Serbia, Skopje, and the Federal Republic of Germany. So far, the helicopter users are beyond Germany which operates 15 helicopters, Hungary with 20 helicopters, Serbia with 9, Thailand with 5, and Luxembourg with 2.

The goal of the shooting campaign in Romania was to test in practice the integration of the SPIKE system with the H145M but also to examine the effects of this weapon system on the aerodynamic characteristics of the helicopter. At the same time, it was a demonstration of the capabilities of the HForce modular system, which Airbus is offering as an armaments package for the H145M and H225M helicopters. 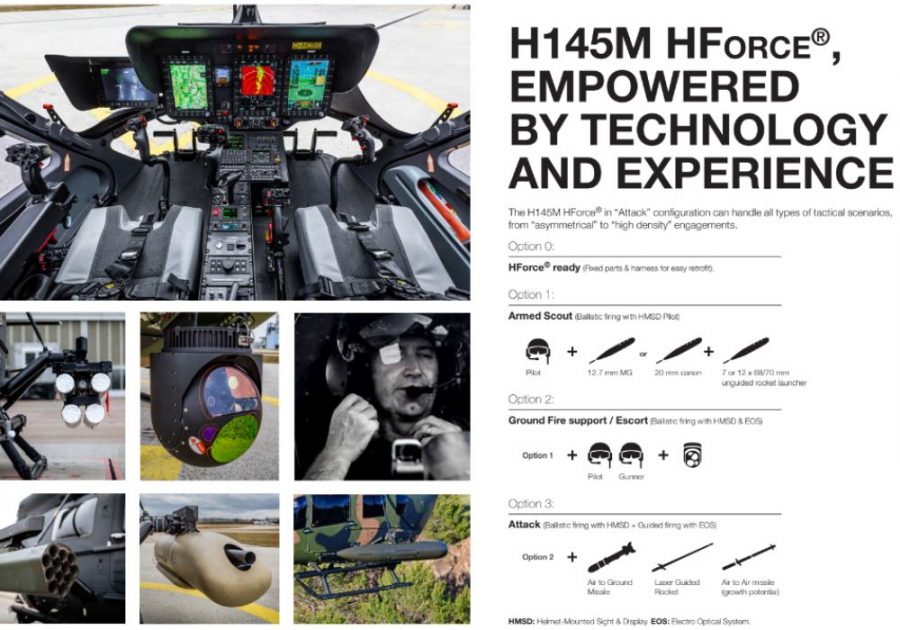 The H145M (Military) comes from the successful version of the H145 (civilian version) and offers a wide range of tactical options on the battlefield. For example, it offers the ability to quickly transfer troops and supplies with minimal delay, to quickly engage enemy forces on the ground, provide Close Air Support (CAS)  and collect and process information.

The power, range, endurance, and useful payload of the H145M provide a variety of deployment capabilities, especially when the helicopter operates in sandy and dusty environments at 6,000 feet and in 95°F/35°C.

A key feature of the H145M is the variety of the available armament packages, which can be quickly installed and uninstalled, depending on the requirements of the mission. Within minutes, the helicopter can be reconfigured from a means of transporting troops to a means of search and rescue missions with winch and rescue stretchers or a light attack helicopter with various weapons options. In particular, the armament suite presented at the Eurosatory exhibition, as you can  see in the video, includes: 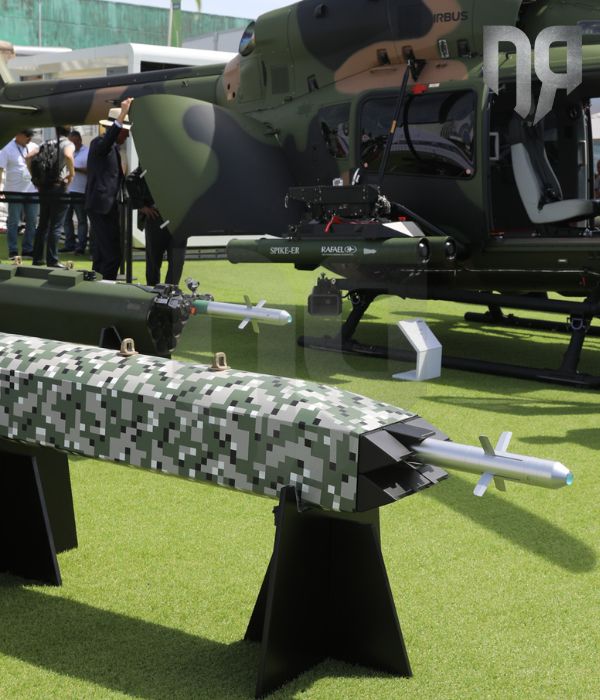 The range of the FZ275 LGR (Laser Guided Rockets) with Lock on Before Launch (LOBL) capability ranges from 1500-7000 meters with a circular error (CEP) of less than 1 meter (at a distance of 6 kilometers). In addition, the rocket has the ability to Lock After Launch (LOAL) or even after designation from a remote source, such as a soldier on the ground or another flying platform. This flexibility gives the H145M better survivability and the ability to engage without visual contact with the target.

The SPIKE ER- 2 missile is an upgrade of the 5th generation missile SPIKE ER (of the SPIKE family of missiles) which is launched from land, sea, and air platforms (helicopters). The missile comes with a maximum range of 16 kilometers (RF data link). SPIKE ER-2 can accurately engage various types of targets such as tanks, armored vehicles, infrastructure, and surface vessels. 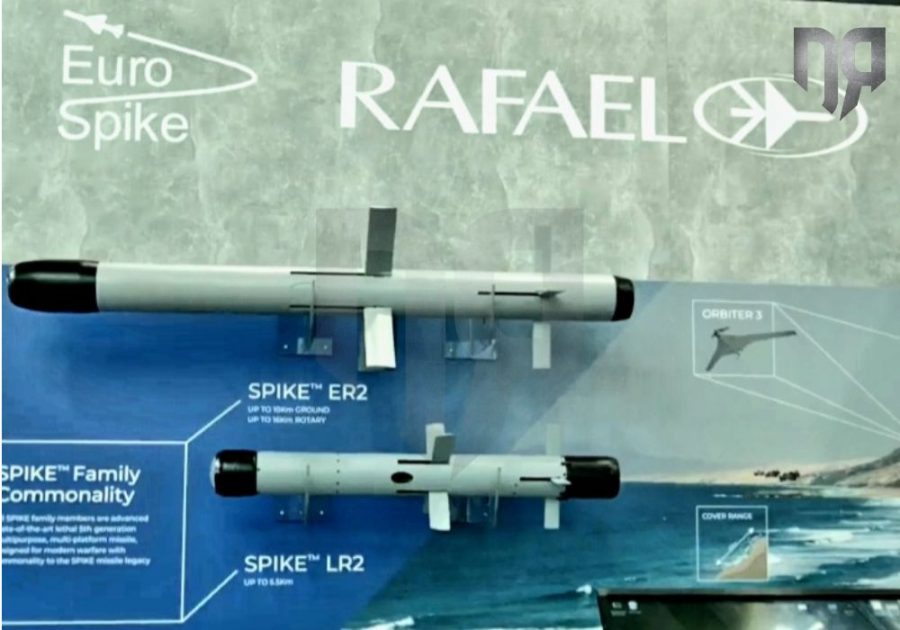 In addition to Fire-and-Forget technology, it has the ability to select targets in flight. An electro-optical detector with a CCD day camera and an IIR infrared sensor are installed on the missile’s head. The weight of the missile – depending on the warhead used (HEAT or PBF) – is around 34 kg.

The main technical features of the H145M include:

Furthermore, as mentioned above the H145M can be equipped with the Airbus HForce module. HForce is a modular and cost-effective weapon system that can be used in any military version of the Airbus Helicopter Series (H125M, H145M, and H225M).

In total, three different packages are available that increase the capabilities of the helicopter in question:

The compact frame of the H145M provides a low-flight profile, which is enhanced by the flexibility of the helicopter in flight. The internal fuel tanks and the light ballistic protection in the frame together with the transparent armored glass in the cockpit made by the Israeli OSG (photo below) add to the level of protection. 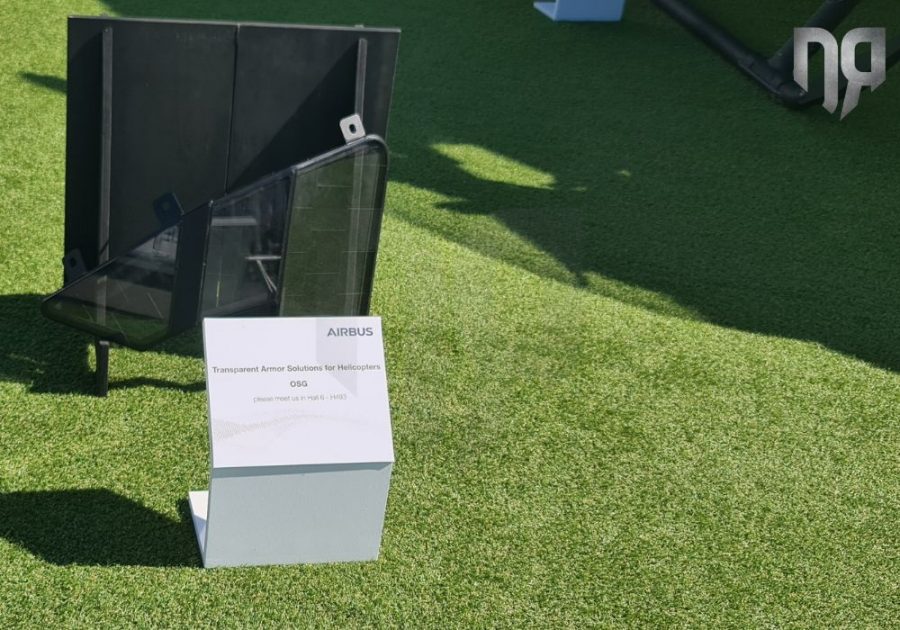 The helicopter can also be fitted optionally with an electronic warfare system (i.e Thales family of systems). The chaffs and flares launchers together with the incoming missile early warning system offer an extra level of protection in high-risk environments. 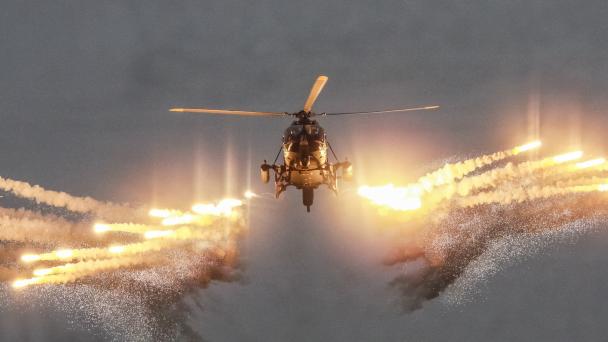 According to Ms. Pinsdorf, early warning systems for laser targeting and radar homing are under development. 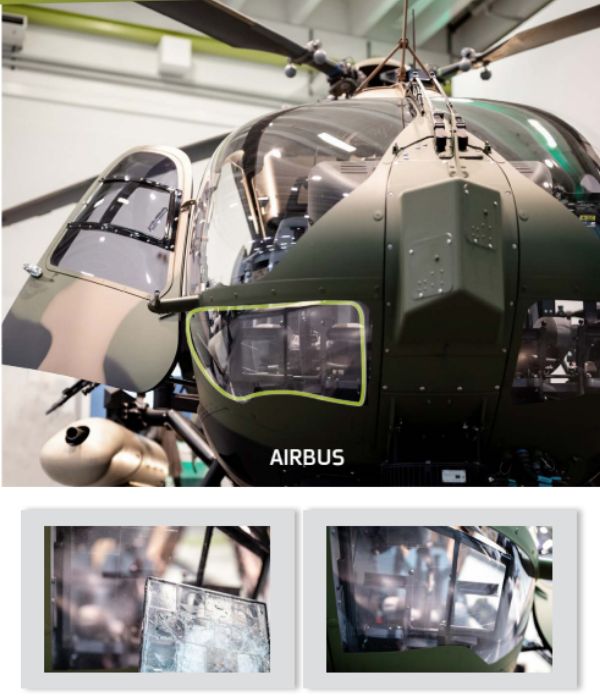 The H145M is equipped with a state-of-the-art digital glass cockpit (Airbus Helionix® Advanced Aircraft Suite), which is compatible with night-vision equipment, and features a 4-axis digital autopilot that drastically reduces the workload of the pilot. The helicopter showcased at Eurosatory was equipped with a Safran Euroflir™ 410 electro-optical system (EOS) which operates in four spectral wave bands (TV / NIR / SWIR / MWIR) providing ISR and targeting capabilities over long distances under any weather conditions, day and night. The Safran EOS comes with a built-in rangefinder and laser pointer. Airbus can offer various EOS options, however, depending on customer requirements. 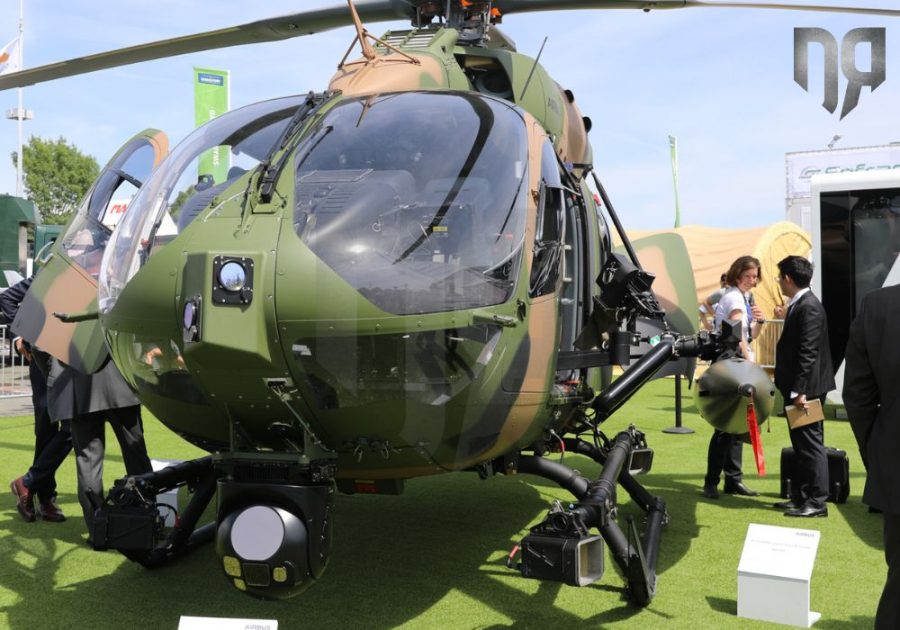 Finally, the H145M is characterized by simplified logistics and maintenance procedures, while it can be transported in long ranges with transport aircraft (e.g. A400). In addition to the self-protection systems described above, future upgrades will include the option of installing air-to-air missiles.

Watch our very interesting video below: