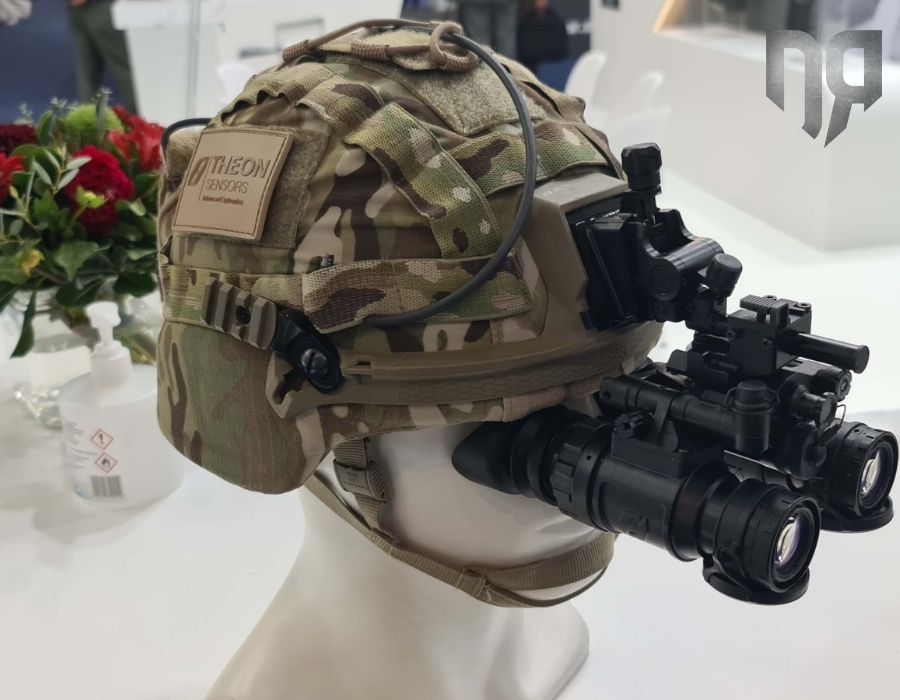 DEFENCE ReDEFiNED visited Theon Sensors pavilion during DEFEA where we had the opportunity to talk to the Business Development Manager, Mr. Papageorgiou Dimitrios. Mr Papageorgiou presented us the products of the pioneering Greek company, which, among others, serve in the special forces units of the National Guard of Cyprus.

In addition, we had the opportunity to discuss future trends in night-vision instruments and to see the company’s products that recently won a very large competition.

Mr. Papageorgiou initially stated that it is with great pleasure and honor that Theon Sensors cooperates closely with the Armed Forces of the Republic of Cyprus and that the company attributes the same importance to Cyprus as to Greece. 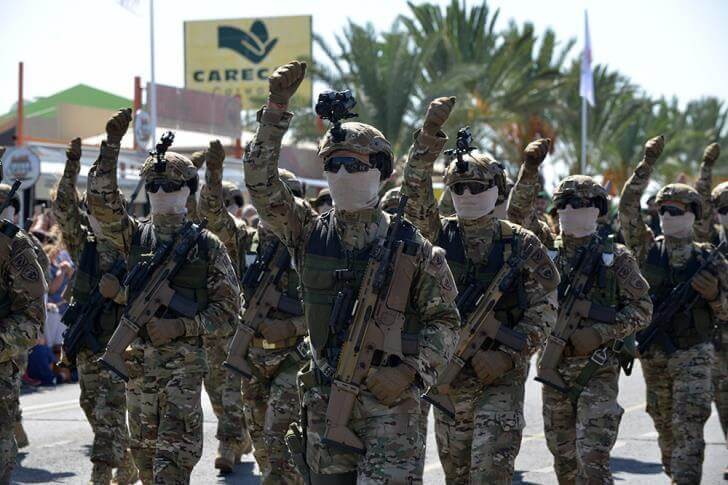 Cypriot Special Forces during the National Day Parade of October 1st 2018. Note the NVGs on their helmets.

The night-vision goggles (nvg) “ARGUS” (monocular) and “ARGUS PANOPTES” (binoculars) have been serving for years in the Special Forces of the National Guard while also in use with many users around the world such as the Armed Forces of Denmark, the Netherlands, Sweden, the United Arab Emirates, with the feedback received by the company being very positive.

“ARGUS PANOPTES” is an advanced modular night-vision system with twin tube binoculars that can be mounted on a wide range of helmets (including VAS shroud), on the head using a head mount assembly or handheld for observation. 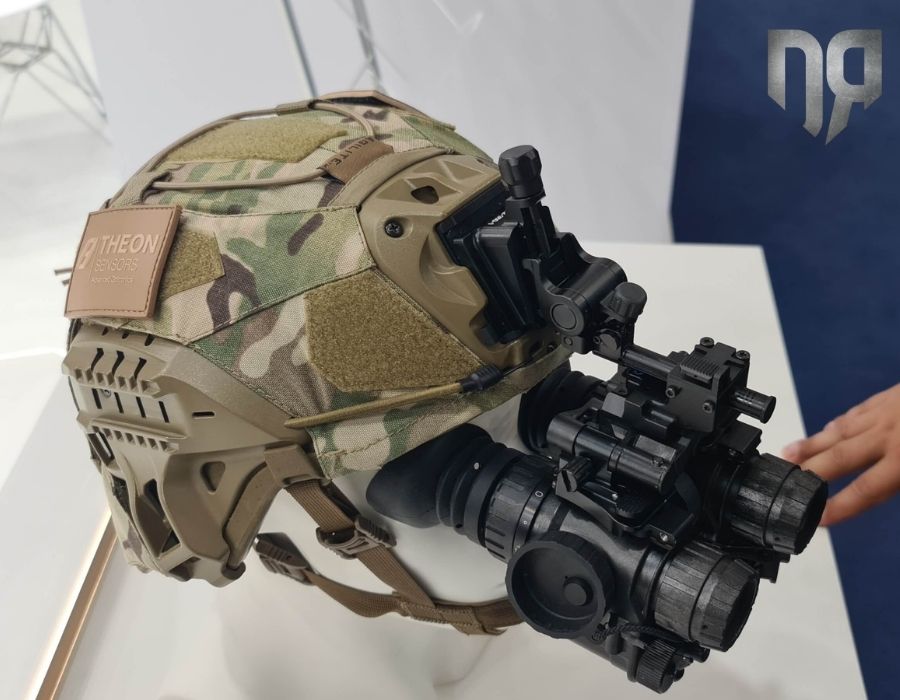 Furthermore, the modular design allows it to be mounted in weapons or used as monocular depending on the mission and operator preferences.

“ARGUS PANOPTES” is available in two versions, one light-weight (LW) version and one with a fail safe (FS) shut off mechanism. The system essentially consists of two “ARGUS” monoculars connected by a connecting bridge.

The other features of the system include among others the ambidextrous operation for head and helmet mounts as well as a full range of accessories including 3X magnifiers, laser protection filters, camera adapters, antifogging etc.

The system, according to Mr. Papageorgiou, incorporates all the technology and know-how of Theon Sensors in the field of night-vision devices and what characterizes it is its flexibility, since apart from the operation for head or helmet mounts, it can also be used on the weapon or by hand (handheld) for long-distance observation (using a magnifier).

Asked about the developments in the field of night-vision instruments, Mr. Papageorgiou told us that the latest trends tend towards dedicated binoculars.

“The reason is simple. Essentially the binoculars offer the possibilities of use for a full range of applications and what do I mean by that. One can also drive with the binoculars or enter confined spaces such as buildings, where it is necessary to use binoculars in order for the user to have a full perspective of the operational situation,” said Mr. Papageorgiou.

“With the so-called flip to the side of an optical channel, it can also be used as a monocular covering relevant applications,” the Business Developer Manager of the company added.

At the same time, what such a device offers is the significantly reduced weight to levels that were not possible some years ago, a feature which is important for operational users who usually carry several kilos of equipment for several hours.

Also read: The Greek THEON Sensors in a competition of the French MoD

To our question about the autonomy of the night-vision systems and specifically of the binoculars, Mr. Papageorgiou responded that Theon Sensors systems – in addition to the state-of-art optics – feature the latest generation electronics; thus, by using a simple AA commercial battery, binoculars can have more than 25 hours of autonomy or 60 hours for the monoculars! In case further autonomy is required, the company offers a remote battery pack with extra batteries which is placed at the rear of the helmet, while operating simultaneously as a counterweight.

According to Mr. Papageorgiou, Theon Sensors has over 100,000 end-users in more than 55 countries around the world. Evaluating their feedback and constantly investing in both human resources and infrastructure, the company has managed to reach the top of the manufacturer list of portable night-vision devices and recently won – in collaboration with the German HENSOLDT – the very large contract (through OCCAR) for the supply of Mikron 16 mm to the Belgian and German Armed Forces. 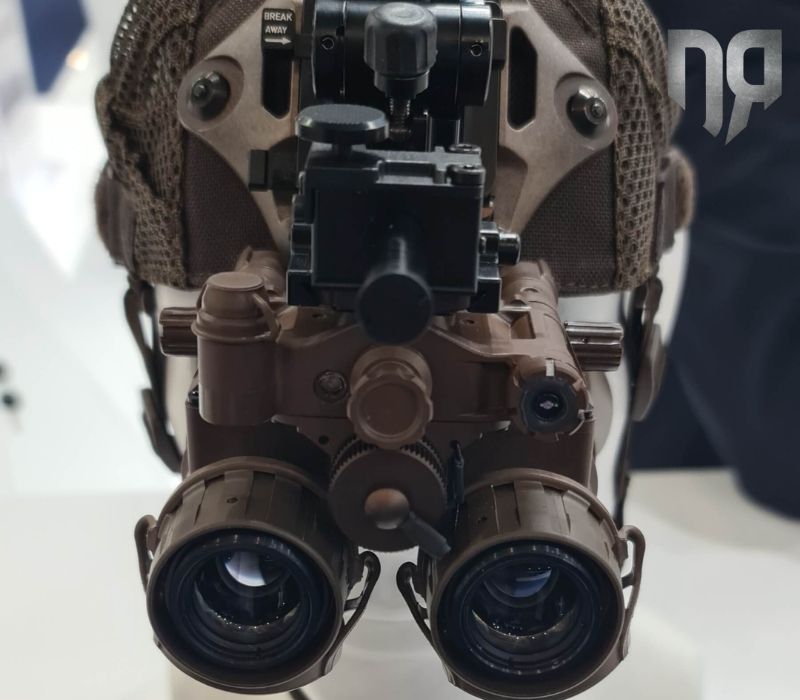 Asked about US Army technology and specifically the new Enhanced Night-Vision Goggle-Binocular (ENVG-B), Mr. Papageorgiou told us that this is essentially a combination of night-vision technology and thermal vision.

Asked about the possibilities of equipping Unmanned Aerial Vehicles (UAVs) with Theon Sensors products, Mr. Papageorgiou told us that Theon Sensors is a member of the largest manufacturer of defence-oriented equipment in Greece, and taking into account that within the EFA Group there is strong cooperation, everything is possible in the future.

It is noted that at DEFEA, EFA Group presented two new companies that recently joined the group and are related to Unmanned Aerial Vehicles, UCANDRONE and AETHER AERONAUTICS.