Caucasus | All the developments on the battlefield – Dozens dead on both sides – VIDEO & Photos
Defence Redefined
Published on 28/09/2020 at 09:22 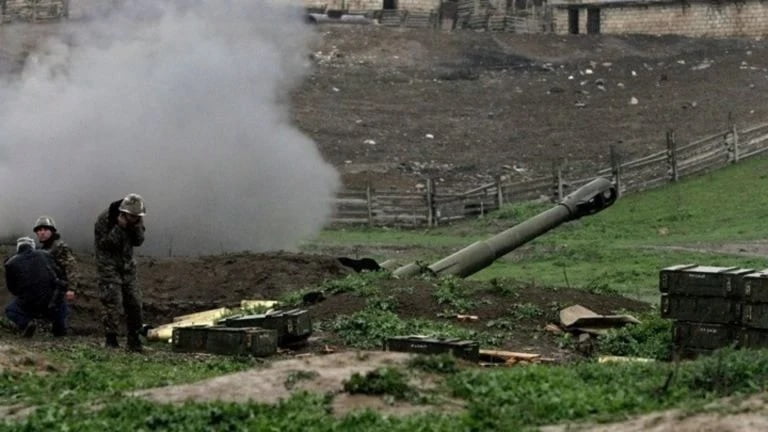 From the early morning hours of Monday 28/09, the battles that commenced on Saturday 26/09 between the separatist region of Azerbaijan, Nagorno-Karabakh, which is supported by Armenia, and Azerbaijan, which is fully supported by Turkey, continue with undiminished intensity.

The developments on the war front are numerous after clashes took place along the entire border line of the Nagorno-Karabakh region. Earlier in the day, Azerbaijan’s Defence Ministry accused Armenia of bombing the border town of Tartar.

The Azeris, with the intensive use of the Turkish Bayraktar TB2, managed to inflict significant blows against the Armenian air defense. According to unconfirmed information, Osa-AK / AKM and S-300 anti-aircraft systems were destroyed with the use of  “kamikaze” drone.

The Armenian forces also managed to inflict significant losses on the Azeris. According to a statement from the Republic of Artsakh on their Telegram network, during the night, the Armenian army, with wonderful operations, recaptured areas that had previously been occupied by the Azeris.

In addition, according to the spokesperson of the Ministry of Defence of Armenia, Shushan Stepanya, 11 armored vehicles of the Azerbaijani army were destroyed or fell into the possession of the Armenian forces icluding an BMP-3.

In the result of the counterattack of the Defense Army units, 11 pieces of the enemy armored vehicles with their combat equipment were seized, including an BMP-3

Videos that have been circulating online since yesterday show the corpses of Azeri soldiers and damaged tanks from recent battles. Warning, images may contain disturbing content!

The official website of the forces of the Nagorno Karabakh region published a new video of its army killing a large number of #Azerbaijani army soldiers supported by the #Turkish government in the night after the #Armenian forces retook the areas that Azerbaijan occupied pic.twitter.com/OxXvtYdxpm — Yekîneyên Servanên Efrînê (@Servanenefrine) September 28, 2020

On its part, the Azerbaijani Defence Ministry said in a press release that “Azerbaijani army units, moving from the high ground and the advantageous positions liberated by the Armenian armed forces, continue the counterattack to succeed.”

The situation, however, seems to be escalating and heading towards a total conflict. According to the AMN news agency, Artsron Hovhannisyan, a spokesman for the Armenian Ministry of Defence, told a news conference that Armenia would use all types of weapons in response to the attack, including the Su-30SM fighter jets.

According to information, the Turkish F-16s are also present in the ethers of the war zone, without however mentioning specific actions.

The death toll on the battlefield is 32 on the side of Nagorno-Karabakh, while on the Azerbaijani side there are no official reports so far. However, the material circulating on the Internet shows a large number of dead Azeri soldiers.