Biden to Zelensky | US to react “decisively” if Russia further invades Ukraine
Defence Redefined
Published on 03/01/2022 at 10:00 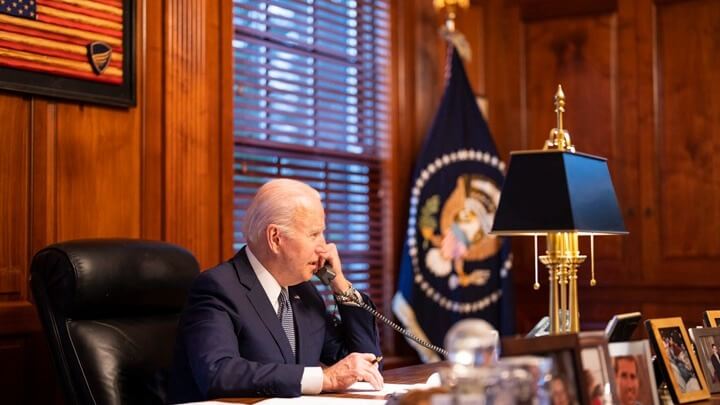 US President Joe Biden assured his Ukrainian counterpart Volodymyr Zelensky during a telephone conversation yesterday Sunday that the US and its allies “will react decisively” if Russia further invades Ukraine.

“President Biden has made it clear that the United States and its allies must act decisively if Russia further invades Ukraine,” said Jen Psaki, White House spokeswoman.

Mr. Biden also emphasized Washington’s commitment at the outset that “nothing” would be decided “for you without you”, referring to the need to include Kyiv in Washington’s negotiations with Moscow on Ukraine’s future.

“We appreciate the unwavering support” of Ukraine from the US, was Mr. Zelensky’s reaction via Twitter. He added that the two men referred to “actions taken jointly by Ukraine, the United States, and their partners to maintain peace in Europe and to prevent the situation from deteriorating.”

Russia and the United States will hold talks on Ukraine in Geneva on Sunday (January 9th) and Monday (January 10th). The two sides, to be represented by US Under Secretary of State Wendy Sherman and their Russian counterpart Sergei Ryabkov, will continue their contacts on Wednesday, January 12 at the NATO-Russia Council, followed by Thursday’s meeting on January 13 in the context of the Organization for the Security and Cooperation in Europe (OSCE).

On Friday, Joe Biden reiterated that he had warned Russian President Vladimir Putin against any invasion of Ukraine during a video conference earlier in the day: “I made it clear to President Putin that we would adopt very harsh sanctions and increase our pressure on Europe, along with our NATO allies.”

“We were clear: it cannot, I repeat, cannot invade Ukraine,” Biden insisted.

This was the second meeting between the two heads of state in three weeks due to the escalation of tensions around Ukraine, with the mobilization of Russian troops on the eastern border of the now pro-Western former Soviet republic.

Last Sunday, the US President also expressed his “support for the confidence-building measures to de-escalate tensions in Donbas and active diplomacy to advance the implementation of the Minsk agreements,” according to Mrs. Psaki.

Under the agreements reached under the auspices of France and Germany, Ukraine agreed to implement political reforms and Russia to end its support for pro-Russian separatist rebels.

Washington and its European allies accuse Moscow of threatening Ukraine with a new invasion of Crimea in 2014, and of waging war between pro-Russian separatists and the Ukrainian army that broke out in Donbas the same year. Some 100,000 Russian troops gathered around the eastern Ukrainian border.

On the other hand, for Moscow, Russia’s security goes beyond the ban on NATO expansion to the east, which it perceives as an existential threat, and the end of Western military activities near the Russian border.

According to the Kremlin, Mr. Putin “welcomed” the discussion he had with the US president on Thursday for about fifty minutes, while noting that imposing massive sanctions on Moscow due to the crisis in Ukraine would be a “colossal mistake.”