The infantry fighting vehicles are undergoing trials as part of Project Land 400 Phase 3, which is tasked to acquire about 450 tracked IFVs (plus 17 manoeuvre support vehicles) that will replace Australia’s fleet of M113AS4 armored personnel carriers, which first entered service during the 1960s.

The “Redback”, which is named after a venomous spider found in Australia, is up against Rheinmetall’s Lynx KF41 for the program, which is due to announce a winner in 2022.

The risk mitigation effort involves detailed test and evaluation of the vehicles throughout 2021 with the aim of providing objective quality evidence to support a government decision on the preferred platform.

The vehicle weighs 42 tons, has a speed of over 65 km/h and can carry an infantry battle group of 8 men and 3 crew members. Its range is defined by its manufacturer at 520 km. 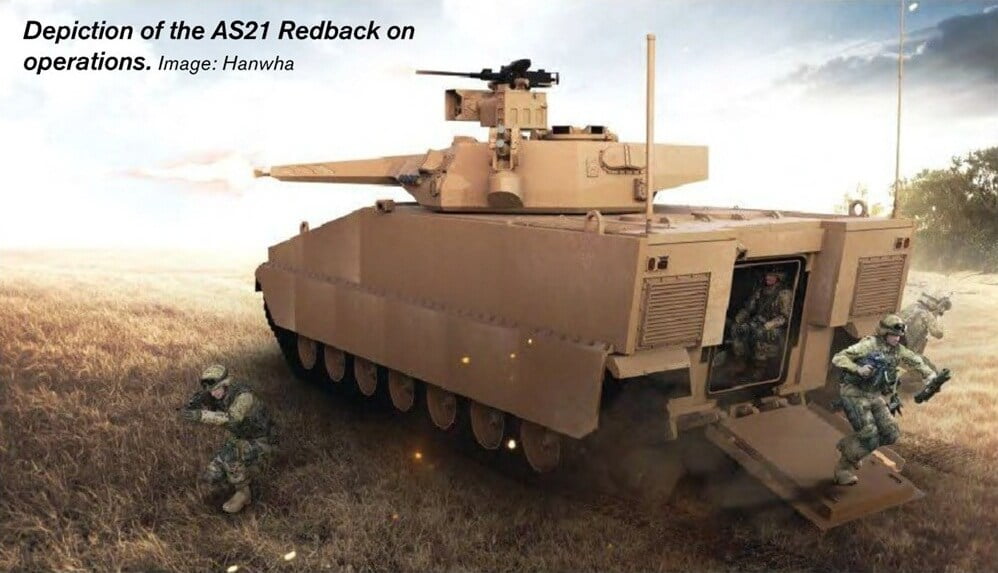 Protection for the AS21 Redback meets STANAG Level 6 requirements (a NATO standard), and is fitted with a range of active and passive protection systems. In addition, it features a floating floor to mitigate the effects of mines or improvised explosive devices (IEDs), and Plasan-made add-on armor.

The Redback is based on South Korea’s AS21 infantry fighting vehicle and is fitted with an EOS T2000 turret mounting a Mk44S Bushmaster II 30mm cannon and a 7.62mm coaxially mounted machine gun.

An EOS R400 four-axis remote weapons station is also mounted on the turret roof and can be fitted with a range of weapons including machine guns or an automatic grenade launcher.

The Redback is also designed with ride comfort in mind, with rubber tracks and independent suspension in lieu of more common metal running gear and torsion bar suspension. Hanwha added that noise reduction measures have also meant it is possible to conduct conversations in the troop compartment, even when the vehicle is moving.

With information from: hanwha-defence, defensenews.com