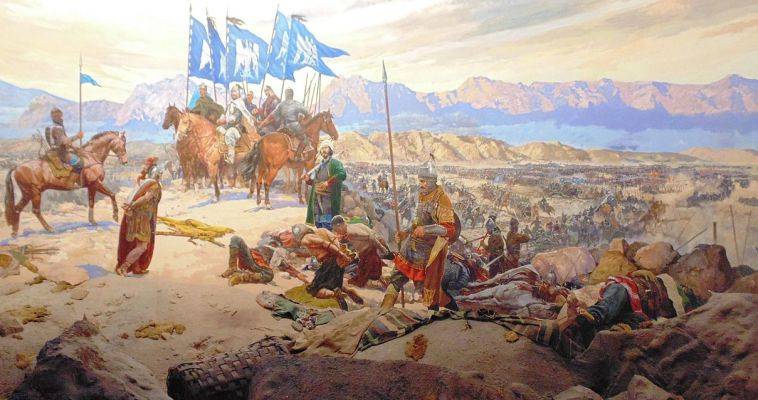 The first decisive victory of the Byzantines which restored the Komnenian dynasty was the battle of Levounion on April 29, 1091, when the Pecheneg forces invaded the Byzantine Empire.

It all started in August 1071, when the Byzantine Army of Romanos IV Diogenes was defeated by the Seljuks at the Battle of Manzikert in eastern Asia Minor. At that time, the successor of the Roman Emperor IV Diogenes, Michael VII Doukas, refused to honor the agreement signed by his predecessor Romanos IV with the Seljuk Turks. Thus, in response, the Turks began to move to Anatolia in 1073, without encountering any resistance.

Alexios Komnenos, a successful young general, ascended the throne of the Byzantine Empire on Easter day, 1081 (he succeeded Nikiforos III Botaniatis, who was the successor of Michael VII Duke).

According to the British author Lord John Julius Norwich, whose contribution to the writing of Byzantine History has been highly significant, the ascension of Alexios Komnenos to the throne was of great importance, as “… for about half a century the empire was in capable hands.” Alexios was determined to change the fortunes of the empire at any cost.

In 1090 or 1091, Emir Tsaka of Smyrna allied with the Pechenegs in order to completely destroy the Byzantine Empire. In the spring of 1087 the Pechenegs invaded the empire from the northwestern Black Sea region with an army of about 80,000 men. Taking advantage of the political unrest of Byzantium on this occasion, the horde of Pechenegs headed to the Byzantine capital, Constantinople, plundering the northern Balkans in its wake.

The invasion posed a serious threat to the empire, as due to the civil conflict the Byzantine army did not have enough troops to repel the invaders. Alexios I, in his attempt to regain numerical supremacy, turned to another nomadic tribe, the Kumans, with whom he allied against the Pechenegs.

The Pechenegs seem to have been taken by surprise and the battle that took place the next morning in Levounion was practically a massacre. The Pechenegs had brought their wives and children with them and were not prepared for the attack launched against them. The Cumans and the Byzantines attacked fiercely and slaughtered everyone in their path. The Pechenegs collapsed quickly and were almost exterminated. The remaining survivors were then obliterated.

The Battle of Levounion was the most decisive victory of the Byzantine army for a period of half a century and marks a turning point in Byzantine history. The empire has been at a nadir for the last twenty years and Levounion has shown that it is on the road to recovery. The Pechenegs were completely destroyed and the European possessions of the empire were safe. Alexios showed himself to be the savior of Byzantium and gave a new spirit of rebirth to the weak, due to the frequent wars, Byzantines.

In the years following the battle, the empire experienced a real renaissance under Alexius and his descendants, the so-called Komnenian dynasty. The Byzantine army returned to Asia Minor, reclaiming lost territories, including fertile coastlines and many important cities. With the restoration of stability in the central government, the empire became rich again for another century, while Constantinople once again became the metropolis of Christendom.

Also read: The Battle of Thermopylae | The defeat that History turned into a victory – Interactive Map